Dolphins round out 4-person draft class, their smallest ever 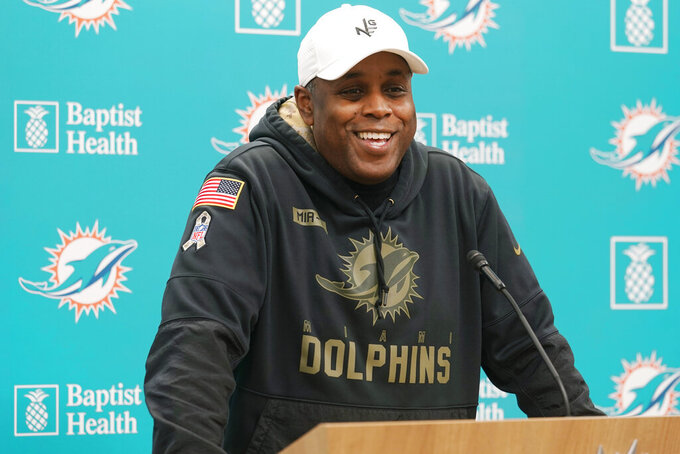 MIAMI GARDENS, Fla. (AP) — In the Miami Dolphins' draft room over the past three days, there was a lack of consensus on at least one topic.

Turns out, there is no official Dolphins stance on whether In-N-Out burgers are overrated. General manager Chris Grier acknowledged that he believes that is the case. Not everyone is apparently convinced.

Such are the conversations that apparently get a team through a three-day-long draft when they have only four picks to make, two of them toward the very end. Between eating piles of sushi and drinking copious amounts of Cherry Pepsi, the Dolphins also found the time to add four players — the last three of those moves coming Saturday.

The Dolphins took Texas Tech wide receiver Erik Ezukanma in the fourth round at No. 125, then grabbed Cal linebacker Cameron Goode in the seventh round at No. 224 and Kansas State quarterback Skylar Thompson at No. 247.

They join Georgia linebacker Channing Tindall, picked late Friday night toward the end of Round 3, as the only members of the Dolphins’ draft class of four — the smallest in team history.

“I'm feeling like there's been a lot of work done, but nothing's been done, if that makes sense," McDaniel said.

Indeed, there is more work to do. Undrafted free agents were being called Saturday night, rookie camps await and there are ways that the Dolphins — who had a busy offseason, landing wide receiver Tyreek Hill as the big move and still have cap room remaining — can also bring in established players between now and training camp.

And even though his first draft was light, McDaniel determined it to be a success.

“We need some Miami Dolphins that our locker room can embrace and can make the players that we have better and make the team better," McDaniel said. “That's what we did and we feel great about that."

All four picks have achievements that simply jump off their college resumes.

Tindall was the only Georgia player who had a three-sack game this past season for the team that would win the national title and finished tied for third with 67 tackles despite not being a starter. Ezukanma led Texas Tech in receiving yards during each of the past three seasons, as well as receptions in 2020 and 2021. Goode had seven sacks — as many as any two of his Cal teammates combined — last fall, which happened to be his sixth year of college. Thompson was the MVP of Kansas State’s Texas Bowl win over LSU in his collegiate finale, and is the only player in his school's history with 6,000 passing yards and 1,000 rushing yards in a career.

Ezukanma had an interview with the Dolphins at the combine, and the team gave him a hat during that meeting. Good thing he held onto it; it came in handy Saturday for his first video conference as a Miami player.

And his new position coach might already have a bit of a soft spot for him: former Dolphins receiver Wes Welker, like Ezukanma, played at Texas Tech.

“He’s Red Raider blood just like me, so (there was) lot of contact throughout the process,” Ezukanma said. “With Wes Welker taking a chance on me and the Miami franchise, I appreciate them so much and I’m grateful for this opportunity and I’m ready just to work.”

Goode has played in Florida plenty of times — played baseball, that is. Baseball became too slow for him, he said, so he switched to football. His father, James Goode, was drafted in the fifth round by Atlanta in 1991 but never officially played in the NFL.

“He’s always telling me about his experiences,” Cameron Goode said. “I just know it’s going to be a mental battle. You’ve always got to be mentally strong. It’s a long process. It’s a fight. Everybody’s good.”

Thompson is someone the Dolphins identified as a quarterback with potential to develop, Grier said.

“He's a competitive kid," Grier said. “Smart, tough, he's got some athletic ability. Always appreciate how he played and how other coaches and the people around him talked about the character and the person. It was always intriguing."