Eagles maneuver to try to overtake Cowboys in NFC East 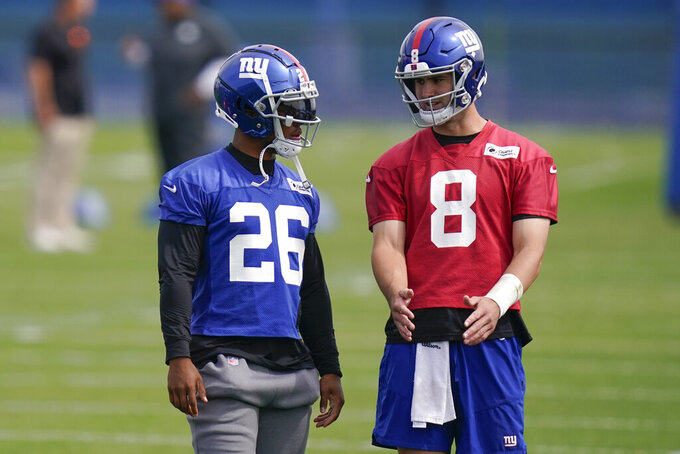 FILE - New York Giants' quarterback Daniel Jones, right, talks with Saquon Barkley during a practice at the NFL football team's training facility in East Rutherford, N.J., May 26, 2022. Jones is entering the final season of his contract and needs to step up to get a new one. Barkley has looked very good in training camp in his second season after a major knee injury. They have been the mainstays of the Giants offense for the last three years. (AP Photo/Seth Wenig, File)

The Philadelphia Eagles made a big move to help quarterback Jalen Hurts. The Dallas Cowboys didn't do the same for Dak Prescott, and might have backtracked with his supporting cast.

Now it's time to see how each approach in the offseason will translate for last season's pair of playoff qualifiers — and wild-card losers — from the NFC East.

The defending division champion Cowboys have more questions on offense than defense for the first time since Prescott took over for an injured Tony Romo as a rookie to start 2016 and led them to the top seed in the NFC.

No. 1 receiver Amari Cooper is gone, traded to Cleveland in a cost-cutting move that cleared the way for CeeDee Lamb to take over that role.

The bigger questions are on the offensive line, which was already in transition before perennial Pro Bowl left tackle Tyron Smith tore a hamstring, probably sidelining him into December. Dallas moved on from two starters, cutting right tackle La'el Collins while left guard Connor Williams signed with Miami in free agency.

The Eagles? Oh, they just have a combined 351 starts — all with Philadelphia — on their offensive line, anchored by five-time Pro Bowl center Jason Kelce and three-time Pro Bowl right tackle Lane Johnson.

Prescott refuses to take the view that his offense is worse off than nine months ago, after a home playoff loss to San Francisco, and understands the responsibility of having to try to make it work.

The Eagles traded the 18th pick and a third-rounder in the 2022 draft to get receiver A.J. Brown from Tennessee. The 2020 Pro Bowler had 2,995 yards and 24 touchdowns in three seasons with the Titans, and now is paired with DeVonta Smith. The 2020 Heisman Trophy winner from Alabama set a club rookie record last season with 916 yards receiving.

Philadelphia started 2-5 under first-year coach Nick Sirianni before winning seven of nine to secure a playoff berth. However, all but one victory came against teams with losing records, and the Eagles were 0-7 against playoff teams.

While Hurts made strides as a pocket passer, he still has to prove he can win big games with his arm as the franchise decides whether he is a long-term answer. He struggled in a 31-15 wild-card loss to Tom Brady and Tampa Bay, which led 31-0 in the fourth quarter.

“I've always had a very high standard for myself, so I’m taking that mentality that I’ve always had and just soaking up everything, growing, chasing growth every day,” Hurts said. “I think that’s allowed me to grow as a quarterback.”

Carson Wentz is back in the NFC East as quarterback of the Washington Commanders. Philadelphia's No. 2 overall pick in 2016 spent last season in Indianapolis, and the Colts decided to move on after losing to last-place Jacksonville in Week 18 when a victory would have sent them to the playoffs.

Wentz hasn't been able to find the form of his MVP-caliber season of 2017, which ended with a knee injury before the Eagles went on to beat New England in the Super Bowl without him. He was traded each of the past two offseasons, and has no money guaranteed in his contract beyond this season.

“You have these long-term goals, but then you can’t look too much at the future or look too much ahead because you’ve got to do what’s required of you at that moment,” Wentz said. “We know where we want to go. We know the expectations. That’s understood.”

BARKLEY ALL THE WAY BACK?

Saquon Barkley was the most impressive offensive player in training camp for the New York Giants, who are 19-46 since drafting the former Penn State running back second overall in 2018.

Barkley had 2,028 scrimmage yards while winning NFL Offensive Rookie of the Year honors four years ago. His second-year production dropped before an ACL injury ended his 2020 season in Week 2.

A year after nobody knew if Barkley would be ready for the opener, the 25-year-old believes he can score on every play. Barring another injury, Barkley can be a 1,000-yard back again.

Barkley, who had 91 receptions as a rookie, also will catch passes in first-year coach Brian Daboll's offense. It's a make-or-break season for quarterback Daniel Jones, the 2019 No. 6 overall pick who didn't have the fifth-year option picked up on his rookie contract.

The Eagles did more than boost the help for Hurts. They added free agent linebacker Haason Reddick, who had 11 sacks for Carolina last season. Philadelphia also made a late preseason move with a trade for New Orleans defensive back C.J. Gardner-Johnson.

The Cowboys might have their best defense in years, led by NFL Defensive Rookie of the Year Micah Parsons. The former Penn State linebacker had 13 sacks, and second-year cornerback Trevon Diggs intercepted 11 passes.

Washington rookie running back Brian Robinson Jr. will miss at least the first four games after being shot twice in the right leg last week during an attempted robbery. He had surgery and was placed on the non-football injury list. The Commanders haven't said whether Robinson will play this season.

The third-round pick from Alabama was mentioned by co-owner Tanya Snyder during the team's Welcome Home Luncheon, calling the shooting a “senseless attack in broad daylight.”

With the 23-year-old Robinson out, Washington has three running backs on the roster: 2021 starter Antonio Gibson, pass-catching specialist J.D. McKissic and veteran Jonathan Williams, whose style most closely resembles Robinson’s.