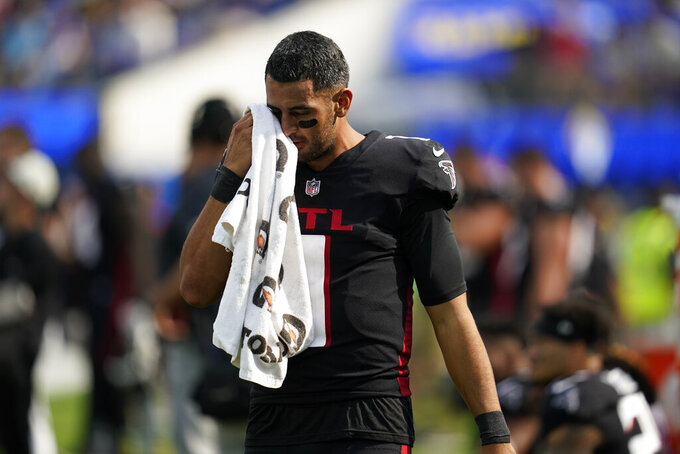 Atlanta Falcons quarterback Marcus Mariota wipes his face during the second half of an NFL football game against the Los Angeles Rams, Sunday, Sept. 18, 2022, in Inglewood, Calif. (AP Photo/Ashley Landis)

OPENING LINE: Seahawks by 1½, according to FanDuel SportsBook.

TURNOVER DIFFERENTIAL: Falcons minus-1; Seahawks minus-2.

FALCONS PLAYER TO WATCH: WR Drake London had a team-high eight catches for 86 yards and the first touchdown of his career last week against the Rams. He’s the only rookie with five or more receptions in each of the first two weeks of the season. His early success is important for the Falcons and should hopefully create more chances for TE Kyle Pitts, who is off to a slow start.

SEAHAWKS PLAYER TO WATCH: There were a lot of high expectations entering the season for pass rusher Darrell Taylor after he had 6½ sacks last year. So far, Taylor’s most notable moment was whiffing on a tackle of Deebo Samuel that led to a 51-yard running play and a field goal for the 49ers. Taylor has three tackles, two QB hits and no sacks in two games. The Seahawks need more.

KEY MATCHUP: Seattle’s offense was supposed to be predicated on being able to run effectively with the combo of Rashaad Penny and Ken Walker III. Through two games, the Seahawks run game is the worst in the league, averaging a mere 56 yards rushing and putting more pressure on QB Geno Smith. The Falcons were gashed by New Orleans in Week 1, but last week limited the Rams to 65 yards rushing — although a run play that lost 26 yards helped.

KEY INJURIES: Falcons backup CB Darren Hall was dealing with a knee injury that had him limited in practice. Hall had a forced fumble and recovery last week. The Seahawks are expected to be without defensive lineman Shelby Harris (glute/personal reasons). Left guard Damien Lewis (quad) and CB Justin Coleman (calf) are likely to be gameday decisions. CB Artie Burns (groin) could be in line to make his season debut.

SERIES NOTES: The previous time the teams met was the season opener of the COVID-19 impacted 2020 season, which Seattle won 38-25 in Atlanta. The Seahawks have won five of the past six regular-season meetings, but Atlanta is 3-1 in Seattle during Pete Carroll’s tenure in charge of the Seahawks.

STATS AND STUFF: The Falcons trying to avoid an 0-3 start for the second time in three seasons. Atlanta started 0-5 in 2020. ... Falcons stayed on the West Coast after last week’s game in Los Angeles and practiced all week in Seattle at the University of Washington. ... QB Marcus Mariota won the Heisman Trophy playing his college career at Oregon. Mariota has one career start against Seattle, coming in 2017 while playing for Tennessee. Mariota was sacked three times and threw two interceptions last week vs. Rams. ... London can become the second player to have at least five receptions and 70 receiving yards in their first three NFL games. Andre Johnson accomplished the feat in 2003. ... TE Kyle Pitts needs 18 yards receiving to move into second place in franchise history for most yards in first 20 games of career. ... LB Mykal Walker is one of three players with an interception, forced fumble and sack in the first two weeks. ... CB Casey Hawyard had his 25th career interception last week. He is one of four active players with at least 110 passes defensed and 25 interceptions since 2012. ... Seahawks haven’t scored an offensive point since the second quarter of Week 1, a span of six quarters and 92 minutes, 24 seconds. ... QB Geno Smith is completing a league-best 81% of his passes through two weeks. ... WR Tyler Lockett had nine catches for 106 yards last week, his 16th career game with at least 100 yards receiving. ... LBs Jordyn Brooks and Cody Barton have both had double figures in tackles in each of the first two weeks. They are the only pair of teammates in the league to accomplish that through two games.

FANTASY TIP: Seattle’s run defense has been shaky through two games and while it’s been a focus this week, the threat of a running QB in Mariota could open the door for a big game from RB Cordarrelle Patterson. Patterson had a career-high 120 yards in Week 1.