Giants load up offense with playmakers for QB Jones 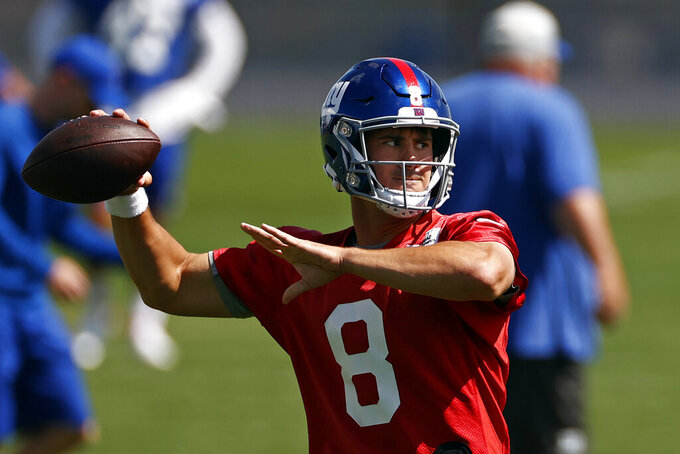 EAST RUTHERFORD, N.J. (AP) — The New York Giants used free agency and the draft to add playmakers for quarterback Daniel Jones, and he is looking forward to meeting the challenge.

Add those players with receivers Sterling Shepard and Darius Slayton, tight end Evan Engram and a group of running backs that hopefully will include a healthy Saquon Barkley and the Giants (6-10) should be able to score a lot more points.

“It’s exciting for all of us to have an opportunity to bring in a couple new guys, build on what we already have,” Jones said after the voluntary minicamp workout. “We have a lot of good playmakers in the building. You add a few pieces, it’s exciting. Looking forward to getting out on the field.”

Jones, who turned 24 on Thursday, downplayed the thought there would be more pressure on him. He said the offense will produce if all 11 players do their jobs.

“Certainly, the quarterback plays a role in that, some communication, getting everyone on the same page,” he said. “I have a lot of responsibility in that, but it’s on each of us.”

With Aaron Rodgers seemingly having issues with the Green Bay Packers, Judge shot down any notion the team was interested in acquiring him, saying Jones is the Giants' quarterback.

“He just has to be the best he is every day, that’s what we ask of all our players,” Judge said. “It’s not going to be perfect all the time, but we need to be the best version you can be of yourself and as coaches we can put you in the best position to play to your strengths."

Golladay and Toney didn't attend Thursday's workout along with most of the secondary and several key players on the defensive line.

Jones is certain all of his teammates are working whether they are at the minicamp or home.

Barkley was at the camp, but he continued to rehab the knee injury that caused him to miss the final 14 regular-season games.

Cornerback Aaron Robinson has signed his rookie contract. The third-round pick is the fifth member of the team’s six-man draft class to do so, joining outside linebackers Azeez Ojulari and Elerson Smith and the two sixth-round choices, running back Gary Brightwell and cornerback Rodarius Williams.

Toney, the top pick, is the only unsigned player.

Robinson played in 29 games with 19 starts at Central Florida after beginning his collegiate career with one season at Alabama. He had 104 tackles, 21 passes defensed, three interceptions, one forced fumble and one fumble recovery in three seasons at Central Florida.

Wide receiver Sterling Shepard has changed his number this season from 87 to 3. The NFL changed its rule regarding numbers and receivers can now wear a single digit.

“That means a lot to me,” Shepard said. “It’s been a number that I’ve been since I was a little kid, after my father passed. He wore No. 3 in college. That’s something that meant a lot to me, a lot to his teammates. I wanted to carry that on,” said Shepard who attended Oklahoma like his father, Derrick.