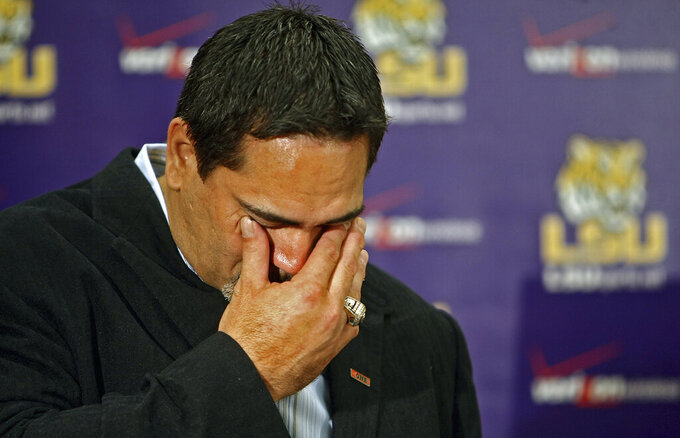 FILE - In this Sept. 10, 2010, file photo, former Tennesee Titans' Kevin Mawae wipes away tears during a press conference after announcing his retirement, in Nashville, Tenn. Mawae will be inducted into the Pro Football Hall of Fame in Canton, Ohio on Aug. 3, 2019. (Jae S. Lee/The Tennessean via AP, File) 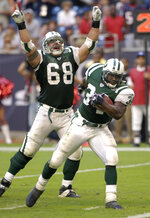 NASHVILLE, Tenn. (AP) — Dirty. A cheap shot artist. Even a dirty Christian for wearing a cross on his face mask and then using every trick Kevin Mawae knew to open holes for his running back or protect his quarterback.

Mawae heard all that chatter, and it bothered him.

Then he realized he was playing football the only way he knew how as an undersized center in the NFL.

"I wasn't stronger and bigger than a lot of guys," Mawae said. "Early in my career, I was considered a finesse player, and that bothered me because I wasn't. I was a technician. And I learned my craft, and I took it to an art form in some sense that I knew what I was doing. I put my body in position to do things that guys didn't know how to counter, and they didn't like that."

And on Saturday, Mawae will be inducted into the Pro Football Hall of Fame , capping a career of 241 games played over 16 seasons with three teams. A three-time All Pro, he was an eight-time Pro Bowl center and a member of the NFL's All-Decade Team for the 2000s. He also blocked for a 1,000-yard rusher in 13 seasons by five different running backs, capped by the NFL's sixth 2,000-yard rushing performance in his final season.

This honor is still a surreal feeling for Mawae, who found it difficult just going into the bust room at the Hall of Fame a couple of months ago.

"That's where legends live, and I'm thinking about guys I played against that are there or played with or the legends I grew up watching play and I get to be among them," Mawae said. "And you know it's exciting, but it's still like you got to pinch yourself to make sure it's still a reality."

Mawae earned his spot by finding ways to fend off men bigger and stronger than he was at 6-foot-4 and 289 pounds. That meant studying each opponent, knowing the game, making calls and run checks at the center spot. Mawae never made a mistake when making a run check.

"It definitely was the right decision," Chris Johnson said with a chuckle of Mawae's calls while in Tennessee.

Mawae started learning that skill at LSU and kept working to improve after being drafted 36th overall in 1994 by the Seattle Seahawks. He credits coaches and former teammates such as Ray Donaldson and Jim Sweeney in Seattle for teaching him what to look for before snapping the ball. That turned him into the quarterback of the offensive line, easing some of the workload on his quarterbacks.

He blocked for two of Chris Warren's 1,000-yard rushing seasons in Seattle. When the Seahawks told Mawae he wasn't the caliber of player he thought he was after four seasons, he became the highest-paid center in the NFL in 1998 playing for coach Bill Parcells with the New York Jets.

That's where Mawae and his fellow offensive linemen started including running backs in their meetings each Thursday to keep everyone on the same page. Mawae blocked for seven of Curtis Martin's 10 1,000-yard seasons with the Jets, including a then-franchise record 1,464 yards in 1999 by the now Pro Football Hall of Fame running back.

Mawae played 177 consecutive games until a torn left triceps ended his final season with the Jets after six games in 2005. He signed with the Tennessee Titans and quickly impressed Mike Munchak, a Hall of Fame offensive lineman himself. Munchak noticed that Mawae aggravated his opponents so much they talked to the center throughout a game.

"Be it a bigger nose tackle or a more physical nose tackle, he was going to find a way to grab his arm, give him a quick yank, he was going to do all those things to frustrate him, to block him, to take him out of his game whatever it took," said Munchak, now coaching with Denver. "And it worked for him and deservedly he's going into the Hall of Fame this year, so I'm real excited for him."

Mawae only knew one way to play.

"The reality of it was you couldn't beat me so you called me a dirty player," Mawae said.

"He rode that line perfectly of what I would call crafty at times, creative and crafty, and using all the tools in his toolbox, as Munch always put it," Roos said.

Mawae's final game was in Seattle, where Johnson ran for 134 yards to reach 2,006 yards. He jumped over Mawae on a 4-yard run for the milestone.

His contract up, Mawae didn't hear from any team in the league in 2010 despite being in the best shape of his life at age 39. He also was president of the NFL Players Association during the 2011 lockout ended by the current collective bargaining agreement he helped negotiate. Mawae calls it a "perfect storm" and was one of the most influential people on the union's side during the protracted negotiations.

"I walked away from the game and I never looked back," Mawae said. "And here I am now eight years later I'm getting ready to go in the Hall of Fame."