Hometown hurdle? Henry has been quiet in games at Jaguars 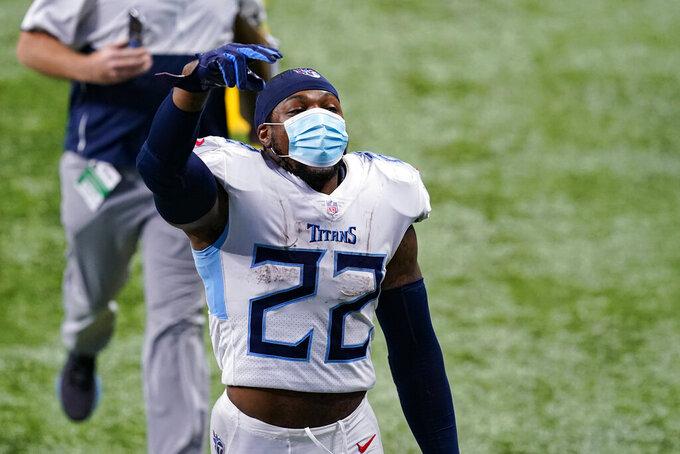 Tennessee Titans running back Derrick Henry (22) salutes fans as he walks off the field following an NFL football game against the Indianapolis Colts in Indianapolis, Sunday, Nov. 29, 2020. The Titans defeated the Colts 45-26. (AP Photo/Darron Cummings)

JACKSONVILLE, Fla. (AP) — Some of Derrick Henry’s biggest plays and most productive games have come against the Jaguars.

Just not in Jacksonville, which is about 25 miles south of Henry’s hometown.

The Jaguars have an impressive streak going against the NFL’s leading rusher this season and last. They haven’t allowed Henry to reach 100 yards rushing in any of his four trips home. He managed just 13 yards on the ground as a rookie in 2016, followed by outings of 92, 57 and 44 yards in front of friends and family at TIAA Bank Field.

Jacksonville (1-11) might need to contain Henry again if it's going to have a chance Sunday against the AFC South-leading Tennessee Titans (8-4), who can clinch their fifth consecutive winning season and move a step closer to securing a postseason berth for the third time in four years.

“We know this guy. We know this guy’s going to get the football and he’s coming downhill,” Jaguars safety Jarrod Wilson said. “We know he’s getting the ball, so it’s really just man on man and trying to match up and do our job.”

Even then, there’s no guarantee defenders won’t end up on Henry’s growing highlight reel. The Jaguars already have secured plenty of appearances, all of them in Nashville, where Henry had a 66-yard touchdown reception in 2017 and a 99-yard run in 2018 that was part of a 238-yard, four-score day.

“He’s coming around the edge at 250 pounds and 6-4, so he’s already got that length advantage,” Wilson said. “Not trying to be on that tape. Try to cut his legs down, get him down the best way I can. Definitely not trying to be on no stiff-arm tape.”

“His stiff-arm is vicious, so we’ve got to be prepared to stop that,” defensive end Dawuane Smoot said. “Like two years ago, I almost got a (tackle for loss) on him and he hit me with one of those stiff-arms. I’ve learned from that.”

The Jags, who tied an NFL single-season record by allowing at least 30 points in six consecutive games, have steadily improved on defense in recent weeks despite losing several starters to injuries. They still rank last in the NFL in total defense (416.0 yards a game) and 30th against the run (136.9 yards a game).

They held Henry to 84 yards on 25 carries in a Week 2 road matchup.

Titans receiver Corey Davis is putting together the best season of his career, and at an opportune time. The fifth overall pick in the 2017 draft is in the final year of his contract with Tennessee. Davis already has four 100-yard performances this season after having two in his first three years. He leads the Titans with 801 yards receiving. Teammate A.J. Brown isn’t far behind with 725 yards receiving. The duo could give the Titans two 1,000-yard receivers this season.

“It would say a lot about him, about me and about this entire team,” Davis said. “So we’ve got a lot of weapons and to be able to spread the ball out like we do ... So I know it would mean a lot to both of us.”

Jacksonville's James Robinson leads all rookies in rushing and yards from scrimmage (1,278), and he ranks second in total touchdowns (9). He needs 32 yards against the Titans to become the first undrafted rookie in NFL history to reach 1,000 yards rushing through the first 14 weeks of a season.

Tennessee's Ryan Tannehill has thrown at least one touchdown pass in nine straight games, and the veteran quarterback now is one away from matching his career high set in 2014 with Miami. He is tied for sixth in the NFL with 26 TD passes, trailing Aaron Rodgers (36), Russell Wilson (32), Patrick Mahomes (31), Tom Brady (28) and Ben Roethlisberger (27).