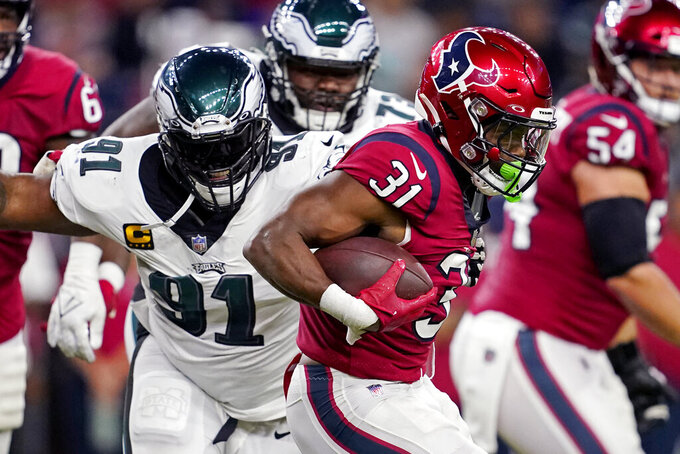 HOUSTON (AP) — Jalen Hurts didn't make too much of the Philadelphia Eagles improving to 8-0 for the first time in franchise history. Instead he reminisced on his freshman year at Alabama in 2016 when his team won its first eight games during a 14-0 start, but came short of the ultimate goal.

“I know it’s special for the city of Philadelphia,” he said. “But I’ve been 8-0 before and lost the National Championship. So we just have to take it day by day. We haven’t accomplished anything yet. It’s a day-by-day thing of us controlling the things we can and playing to our standard and trying to grow every day.”

Hurts threw for 243 yards and two touchdowns, and the Eagles overcame a slow start to beat the Houston Texans 29-17 on Thursday night.

Hurts lost a fumble in a forgettable first half and game was tied at halftime.

But C.J. Gardner-Johnson grabbed his NFL-best and career-high fifth interception before Hurts threw a 17-yard touchdown pass to A.J. Brown to give the Eagles the lead in the third quarter.

“That catch shifted the game and our momentum,” he said.

Houston (1-6-1) added a field goal after that but another scoring toss by Hurts and his 2-point conversion run extended the lead to 29-17 early in the fourth.

The Texans were driving late in the fourth when Davis Mills was intercepted again, this time by James Bradberry and the Eagles ran out the clock to secure the victory.

At the same time the Houston Astros were in Philadelphia playing the Phillies in Game 5 of the World Series, Hurts played his first career game at NRG Stadium. Hurts, who was born in Houston and grew up about 25 miles from the stadium, continued his solid play in his homecoming to win his 11th straight regular-season game, which is the longest active streak in the NFL.

“It was special,” Hurts said. “Coming back in a place where I built a lot of memories with my mom and my dad watching ball in this same stadium… I’m proud that my mother, my family got to see that.”

Hurts, who is possibly dealing with mixed emotions, smiled but avoided the question when asked what he thought about the Astros taking a 3-2 lead in the Series

The Eagles fans seemed to outnumber the Texans fans Thursday night, a sight that surprised and pleased Sirianni.

“I’m starting to think we’re not playing any away games,” he said. “I tried to say thank you to as many of them as I possibly could. I would love to have a drink or high-five everybody, every one of them. But obviously, there’s too many of them in the stands for me to do that.”

The Eagles are the 29th team in the Super Bowl era to start 8-0 and the other 28 all made the playoffs. Fifteen of those teams went on to win their conference and eight won the Super Bowl.

Mills threw for 154 yards with two touchdowns and two interceptions, playing without his top two receivers. Brandin Cooks sat out after missing practice all week following trade rumors that never materialized, and Nico Collins missed the game with a groin injury.

Houston rookie Dameon Pierce ran for a career-high 139 yards to bounce back from a tough game last week, when he gained just 35 yards on 15 carries.

“We knew who we were playing,” Houston coach Lovie Smith said. “Some people regard them as the best team in football right now. I thought our guys played hard from start to finish. We didn’t always play smart football, and there are some mistakes that we have to eliminate, but I liked the way they fought.”

Gardner-Johnson got an interception for a fourth straight game when picked off Mills with about 8 1/2 minutes left in the third quarter and returned it 25 yards.

The Eagles cashed in on the turnover two plays later when Hurts found Brown for the score to make it 21-14 with about 8 minutes left in the third.

Houston cut the lead to 21-17 on a 30-yard field goal by Ka’imi Fairbairn late in the third.

Hurts found Dallas Goedert for a 4-yard TD pass on the next drive and Hurts padded the lead with his 2-point conversion run.

The Texans took an early lead when rookie Teagan Quitoriano, who was making his NFL debut, grabbed his first career reception for a 2-yard touchdown on the first series. Quitoriano is a fifth-round pick who missed all season with a knee injury.

That score was set up by a 34-yard reception by Phillip Dorsett two plays earlier.

Philadelphia tied it at 7-all on a 2-yard run by Miles Sanders on fourth down late in the first quarter. Sanders finished with 93 yards rushing.

The Eagles were driving early in the second quarter when Hurts was sacked by Steven Nelson, who forced a fumble that was recovered by Jaleel Johnson at the Houston 35.

Houston couldn’t move the ball and had to punt. Philadelphia then put together a 10-play, 79-yard drive capped by a 4-yard TD run by Kenneth Gainwell to take a 14-7 lead.

The Texans tied it less than a minute before halftime when Mills connected with Chris Moore on a 13-yard touchdown pass. The play was first ruled in complete, but it was reviewed, and the call was overturned.

Philadelphia attempted a 54-yard field goal as time expired in the first half, but it sailed wide right.