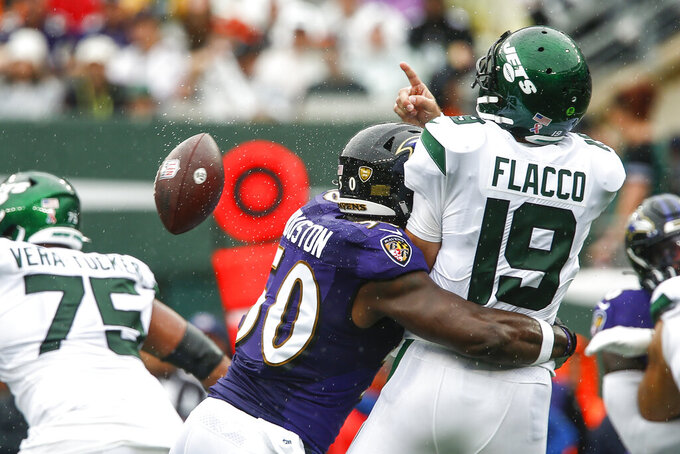 EAST RUTHERFORD, N.J. (AP) — Lamar Jackson is betting on himself to cap another big season with a huge payday. The Baltimore Ravens' star quarterback certainly got off to a terrific start.

Jackson threw three touchdown passes, including two to Devin Duvernay, and the Ravens rolled past the New York Jets 24-9 on a rainy Sunday in the regular-season opener.

“He played a patient, veteran quarterback game,” coach John Harbaugh said. “He was in control of everything.”

Jackson went 17 of 30 for 213 yards, including a TD to Rashod Bateman, and had one interception. The performance came hours after ESPN reported that Jackson turned down a five-year extension offer worth more than $250 million — with $133 million guaranteed at signing.

Jackson denied the ESPN story when asked after the game by the outlet's reporter whether he turned down a $250 million guaranteed contract: “With a guarantee? No. No, there’s no truth to that.” And then Jackson was whisked away from the podium by a Ravens media relations staffer.

Baltimore general manager Eric DeCosta said in a statement Friday the sides would keep working on an extension after the season. Jackson, entering his fifth-year option on his rookie deal, gave the Ravens even more to consider.

Jackson didn't run much on Sunday, just 17 yards rushing on six carries, but he didn't need to because Joe Flacco and the Jets offense struggled to get anything going.

It was also far from a dynamic start for the Ravens, who thought the emotions and energy from the MetLife Stadium crowd on the 21st anniversary of the Sept. 11 attacks — the site of the former World Trade Center just across the Hudson River — played a factor.

“Exactly what we thought was exactly what happened,” Harbaugh said. "We were hoping to weather that first quarter.”

And then Jackson and the Ravens got going.

“It was us feeling it out out there,” said Jackson, who didn't play in the preseason. “We were getting back into the swing of things.”

Flacco, starting against the team with whom he won a Super Bowl, was ineffective and wasn't helped by a few drops and lousy pass protection. He went 37 of 59 for 307 yards and a touchdown and interception — and the fans at MetLife Stadium chanted backup Mike White's name a few times in the second half.

Flacco started in place of Zach Wilson, who's out until at least Week 4 while recovering from a bone bruise and a torn meniscus.

“We just never really got into a rhythm," Flacco said, "and got any energy going behind us.”

There were early signs this could be a long one for the Jets' offense.

But the Jets missed a chance to tie early in the second quarter when Greg Zuerlein was wide left on a 45-yard attempt.

Jackson's perfectly placed pass to Duvernay for a 25-yard TD gave the Ravens a 10-point lead with 3:45 left in the first half.

The Ravens extended their lead to 17-3 on their second drive of the second half on Duvernay's second touchdown catch.

The Jets appeared to make a big play on defense late in the third quarter when D.J. Reed forced Mike Davis to fumble, but the Ravens running back recovered. On the next play, Bateman split two Jets defenders and Jackson lofted a pass that hit him in stride for a 55-yard touchdown that made it 24-3.

Early in the fourth quarter, rookie running back Breece Hall fumbled after a 7-yard catch that would've been a first down. Marlon Humphrey recovered for the Ravens.

Two other moments were indicative of the lousy day for the Jets. One came when Flacco found a wide-open Michael Carter on fourth-and-goal from the 6 with 4:17 left, but Carter dropped the pass in the end zone.

And with 1:18 remaining, Elijah Moore appeared to have a touchdown on third down. He was called for offensive pass interference on a play during which Ravens cornerback Kyle Fuller injured his left knee and needed help off the field.

The Jets finally got into the end zone a few plays later on Tyler Conklin's 2-yard TD catch with 1 minute left, but Zuerlein missed the extra point.

“You’re not going to beat a veteran team when you’re not capitalizing on the momentum that you gain,” Jets coach Robert Saleh said. “From dropped passes to being loose with the football and missed kicks, this is a game, in my opinion, that we absolutely lost.”

The Jets dropped their 13th straight game in the month of September, dating to the 2018 season.

Ravens: LT Ja’Wuan James, who started in place of the injured Ronnie Stanley, was carted off the field with what was initially called a left ankle injury but Harbaugh later confirmed was a torn Achilles tendon. It's the same injury that sidelined him all last season. ... Fuller is having an MRI on Monday.

Ravens: Host the Miami Dolphins next Sunday in their home opener.

Jets: Travel to Cleveland to face the Browns next Sunday.