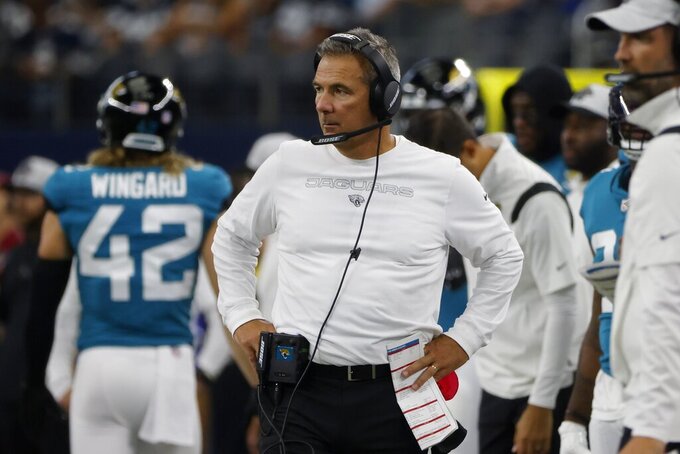 The Jacksonville Jaguars owner admittedly whiffed by hiring Mike Mularkey, Gus Bradley, Dave Caldwell, Tom Coughlin and Doug Marrone during his first nine years on the job. He was the second fastest in league history to lose 100 games despite taking several different approaches.

He tried a longtime NFL assistant (Mularkey), went with an up-and-coming coordinator (Bradley) and eventually turned to someone with head coaching experience (Marrone). Khan even threw a two-time Super Bowl champion (Coughlin) into the mix.

Sure, there was that memorable run to the AFC championship game in 2017. But Khan suffered double-digit losses in each of his other eight seasons. His frustration peaked during last year’s 15-game losing streak. He fired Caldwell, the team’s general manager, then let Marrone go a few weeks later.

Khan had a new plan, one he had been contemplating for months, maybe even a year.

It centered around Urban Meyer and Trevor Lawrence, a three-time national championship-winning coach and a quarterback who lost twice in college.

“This time, I got it right, OK?” Khan said emphatically. “We have the opportunity to go with winners and then let them build.”

Meyer and Lawrence are now tasked with leading Jacksonville’s latest – maybe greatest – attempt at a sustainable turnaround. It begins Sept. 12 at Houston.

The highly organized and supremely detailed Meyer spent the last eight months putting his stamp on every aspect of the floundering franchise, from revamping the team’s health and nutrition approach to adding a “rejuvenation room” designed to enhance rehab.

Instead of trying to conform to traditional NFL ways, Meyer carried over many of the same methods that worked so well in stops at Bowling Green, Utah, Florida and Ohio State: winner/loser drills, up-tempo practices, no days off for anyone.

“We want to win,” receiver DJ Chark said. “If this is the way to win, then that’s what we’re going to do and that’s the plan. So let’s do it, let’s see how it works.”

Meyer leaned on several veteran NFL assistants, including offensive coordinator Darrell Bevell and defensive coordinator Joe Cullen, for advice on creating schemes and playbooks, building the roster and figuring out how far he could push professionals.

But the bottom line is Meyer inherited a team that won one game last season and remains one of the youngest in the league. But he added nine draft picks, including Lawrence with the No. 1 overall selection, and signed several starters in free agency.

He also has a vision for success. Meyer wants to be the fastest team in the league, be an up-tempo offense that features spread-option elements that Lawrence ran to near-perfection at Clemson, get after opposing quarterbacks, be dynamic on special teams and show creativity at every turn.

“We’re going to continue to push the envelope on that stuff,” he said.

It’s refreshing for Khan, who finally feels like he has the right combination at the two most important positions in football: coach and quarterback.

“Nine years ago, buying the team, it was like the great journey, the first step on a 1,000-mile journey and looking to the horizon.” Khan said. “And what it is now? We’ve been through ups and downs, mostly downs. Now you’re looking at a great upside.”

Travis Etienne was supposed to be a game-changer for the Jaguars. But they will have to wait a year to see what the 25th overall pick in the NFL draft can do. The all-time leading rusher in Atlantic Coast Conference history, Etienne suffered a Lisfranc injury to his left foot in a preseason game and was placed on injured reserve.

“That was a shot in the jaw, that one,” Meyer said.

With Etienne out, journeyman Tavon Austin has a chance to become the team’s change-of-pace back and potentially created mismatches for opposing defenses. The ninth-year receiver, the eighth overall pick in the 2013 draft, has 3,366 yards from scrimmage and 25 touchdowns.

He has spent time with St. Louis (2013-17), Dallas (2018-19) and Green Bay (2020) before signing with Jacksonville in early August. Jacksonville surprisingly kept him over Laquon Treadwell, Phillip Dorsett and draft picks Collin Johnson and Jalen Camp.

The worst defense in franchise history got a makeover in the offseason. After giving up an AFC-leading 492 points (28.9 a game), Meyer and general manager Trent Baalke took a huge swing on that side of the ball.

They signed more than a dozen free agents, used four draft picks on defenders and switched to a 3-4 scheme.

Cullen, who came to Jacksonville from Baltimore, expects the unit to be considerably improved. It starts with getting more from pass rushers Josh Allen and K’Lavon Chaisson, who combined for 3½ sacks in 2020.