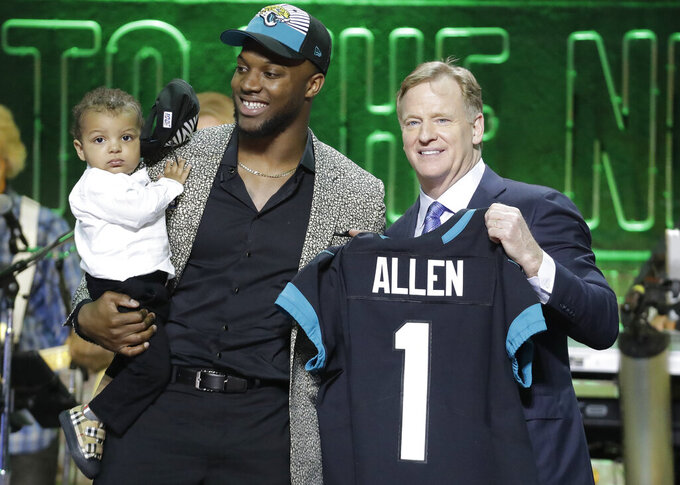 JACKSONVILLE, Fla. (AP) — The Jacksonville Jaguars added to their deepest position by drafting another pass-rusher.

The Jaguars selected Kentucky defensive end Josh Allen with the seventh pick in the NFL draft Thursday night, landing the Southeastern Conference's defensive player of the year despite more pressing needs on the other side of the ball.

"Too good a player to possibly pass up," said Tom Coughlin, the team's executive vice president of football operations. "Can't have enough of them."

Picking in the top 10 for the 11th time in 12 years, the Jaguars could have gone in several directions. Offensive tackle and tight end are considered bigger needs, but they went defense.

Coughlin and general manager Dave Caldwell said Allen was a notch higher on their draft board than tight end T.J. Hockenson, defensive tackle Ed Oliver and any offensive lineman available.

In fact, Jacksonville performed dozens of mock drafts in the days before the start of the three-day event and only came up with a couple in which Allen was available at No. 7.

"It's a big man's game, and he's a big man that has speed, that can come around the edge, that has power that can hold the point," coach Doug Marrone said. "When you look the film, it stands out. It's like, 'Who's that guy?'"

Caldwell said Allen will likely fill the role vacated by pass-rusher Dante Fowler, who was traded to the Los Angeles Rams last season. That means Allen would back up starting defensive end Yannick Ngakoue and play opposite Ngakoue on passing downs.

"In our division, when you play Andrew Luck and Deshaun Watson and Marcus Mariota and in the conference where you have some great quarterbacks, you have to be able to get after them," Caldwell said. "Between Yannick and him and Calais (Campbell) and Marcell (Dareus), it's going to be a fun season."

Star cornerback Jalen Ramsey tweeted out a text exchange shortly after the pick showing messages between he and Allen two weeks ago in which Ramsey told Allen he was the best player in the draft.

Allen said he welcomed joining Ramsey and the rest of the defense, which has been among the best in the league the last two seasons.

"They get after the quarterback," Allen said. "That's all I needed to hear."

Then move was hardly unique for Coughlin, who developed a reputation with the New York Giants of drafting along the defensive front even though the team had more pressing needs elsewhere. He picked Justin Tuck (third round, 2005) and Mathias Kiwanuka (first round, 2006) in consecutive years despite already having Michael Strahan and Osi Umenyiora.

Allen visited Jacksonville earlier this month and joked with Coughlin that the Jags might have to trade up to get him.

Coughlin laughed at the time and was holding his breath as Allen slid a few spots Thursday.

"That's the way the draft goes," Coughlin said. "He's outstanding athletically. He drops in coverage. He rushes the passer. He's a good ball-stripper. He gives good effort. You see him work sideline to sideline. ... Outstanding young man and a guy who will definitely help our defensive football team."