Jaguars fielding no offers for top pick, narrow choice to 4 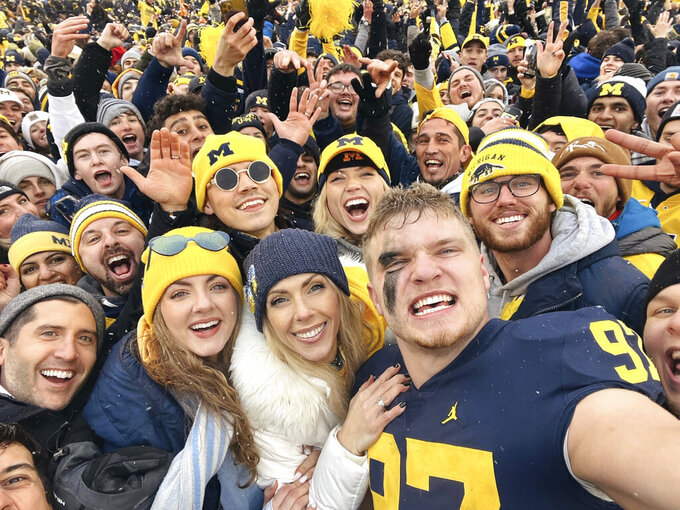 In a photo provided by Melissa Hutchinson, Aidan Hutchinson takes a selfie with family and fans after Michigan's win over Ohio State on Nov. 27, 2021, in Ann Arbor, Mich. Jacksonville is expected to select Hutchinson with the No. 1 pick in the NFL draft on Thursday night, April 28. It's easy to see why the Jaguars would want him after watching what Hutchinson did last year at Michigan. Scouts who searched for more about his background found out Chris and Melissa raised a well-rounded son, uniquely shaped by a close-knit family that includes two older sisters. (Aidan Hutchinson via AP)

JACKSONVILLE, Fla. (AP) — The Jacksonville Jaguars are open to trading the No. 1 pick in next week’s NFL draft, something they never would have considered a year ago.

This time, though, there’s little, if any, interest.

Hutchinson is the betting favorite and has been for months, according to FanDuel Sportsbook. He probably makes the most sense, too, considering the talent-starved franchise probably would be better served making the safest choice and eliminating as much risk as possible.

The only question: How much upside does the 6-foot-6, 265-pound defensive end have?

“I think every player that comes out of college has upside,” Baalke said. “To say somebody’s tapped out when they’re 21, 22 years old is a little hard to say. You look at all the factors that go into it — fit, versatility, production, traits. All those things are weighed into it.

“Aidan’s a good football player. There are other good football players in this draft, and who’s going to be the best player when it’s all said and done? Heck, if knew that we’d go to Vegas and lay money down. That’s how I’ve always looked at this. You do the work. It’s all you can do. Do the work, watch the film, study the guy, study the character of the guy and try to make the best fit for your organization, and that’s what we’re doing.”

Jacksonville has 12 picks in all, including four of the first 70 selections. The Jags must get a linebacker, a tight end and interior offensive linemen. They could justify drafting an offensive tackle at No. 1 even though Baalke said Friday they are making progress on signing Cam Robinson to a long-term deal. Robinson signed a one-year franchise tender that guarantees him $16.7 million in 2022.

But improving the team’s pass rush is atop the list of needs. Jacksonville managed a measly 50 sacks over the past two seasons, and the team’s defensive woes are mostly related to a lack of pressure that often cause game-changing turnovers.

“You better be right and that person is going to come in and start,” Pederson said. “That’s why you pick him at 1.”

The Jaguars don’t have any offers for the top pick, but they do expect to have some at No. 33. The first selection in the second round Friday night typically draws interest, especially after teams spend hours mulling who’s left following the opening round.

But Baalke said they intend to make that pick.

“We’ve had some really good discussions on that second pick,” he said. “That second pick usually carries a lot of value because you sit there and 31 other teams have all day the next day to think about that pick, who they may want. Generally, that’s a good pick for trade purposes. If our player’s there — and we have a couple in mind — I doubt we move out of that spot, but we certainly may consider it.”

Baalke and Pederson hope — and expect — this will be their last time with the top pick. Jacksonville is the sixth team since the 1970 NFL merger to land the No. 1 draft spot in consecutive years. Only Tampa Bay in 1976 (Lee Roy Selmon) and 1977 (Ricky Bell) nailed both selections.

“If we’re doing our jobs, then we’re having success on the football field and we’re not in this position much,” Pederson said. “To me, that’s a sign of the hard work that the coaches, the personnel staff put in obviously making the right decisions and then we have to go prove it on the field.”

Added Baalke with a laugh: “I’m pretty confident that this will be the last time that I’ll be making the first pick.”