Jaguars, off upset win, try to take another step at Indy 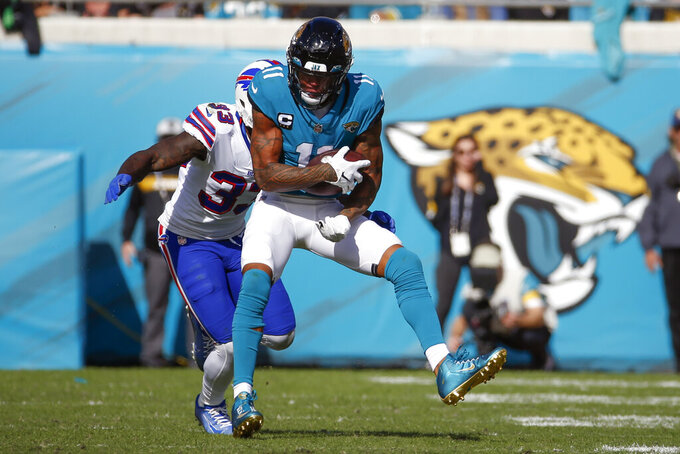 BETTING LINE: Colts by 10 1/2, according to FanDuel SportsBook.

AGAINST THE SPREAD: Jacksonville 3-5; Indianapolis 6-3.

TURNOVER DIFFERENTIAL: Jaguars minus-9 ; Colts plus-10.

JAGUARS PLAYER TO WATCH: QB Trevor Lawrence. This year's top overall draft pick is making his first trip to Indianapolis. While Lawrence has progressed, he's completed 59.7% of his throws with 774 yards, four touchdowns and four interceptions in three road games. This is where he needs to take another big step.

COLTS PLAYER TO WATCH: Michael Pittman Jr. The second-year receiver has had breakthrough moments this season and has become QB Carson Wentz's favorite target. He's caught at least one touchdown pass in three straight games and has five TD receptions in the last five, and when he's not catching passes, he's drawing penalties. Against a poorly rated pass defense, expect Wentz to look repeatedly for Pittman.

KEY MATCHUP: Indianapolis offensive line vs. Jacksonville pass rush. Last week, DE-OLB Josh Allen made life rough for the Bills quarterback who goes by the same name. He's emerging as a major defensive disruptor with 18 1/2 sacks in his first 32 games. The Jags need Allen to make a similar impact against a healthier Indianapolis offensive line that has improved steadily throughout this season.

SERIES NOTES: The Colts and Jaguars have split the last six meetings and the last three season series. ... Indy has won 15 of its 20 home games against Jacksonville. ... These franchises met only twice before joining the newly created AFC South in 2002. ... Jacksonville rushed for a franchise record 375 yards in a 44-17 win over Indy on Dec. 6, 2006. Eight weeks later, the Colts won the Super Bowl.

STATS AND STUFF: The Jaguars have won two of three since snapping a 20-game losing streak. But they've lost 11 consecutive road games since winning at Oakland on Dec. 15, 2019. ... Jacksonville has lost lost eight straight division games since defeating Indy in last year's season opener for its only win of the season. ... The Jags have held six of this season's eight opponents to fewer than 100 yards rushing. ... Lawrence has 1,821 yards passing and eight TDs. Both numbers are second among NFL rookies. ... Jags RB Robinson ranks seventh in yards from scrimmage over the past two seasons with 2,029. ... Second-year WR Laviska Shenault had three TD catches against the Colts last season. ... Indy has won three of its last four and a victory Sunday would make the Colts .500 for the first time this season. ... Wentz has thrown at least two TD passes in six consecutive games and is coming off a career-best single-game rating of 134.3. ... RB Jonathan Taylor needs 10 yards rushing to become the fourth Colts player with 2,000 in his first two seasons. He's scored a touchdown in six straight games and has six consecutive games with 100 yards from scrimmage and is trying to become the fourth player in the Super Bowl era to accomplish each in seven straight. ... Colts RB Nyheim Hines needs six receptions for No. 200.

FANTASY TIP: The Colts' defense. While Taylor is always a good pick, this ball-hawking defense leads the NFL with 20 takeaways and is tied for sixth with 10 interceptions. Against a young team, a rookie quarterback and in front of a home crowd, Indy's defense could have a big day.