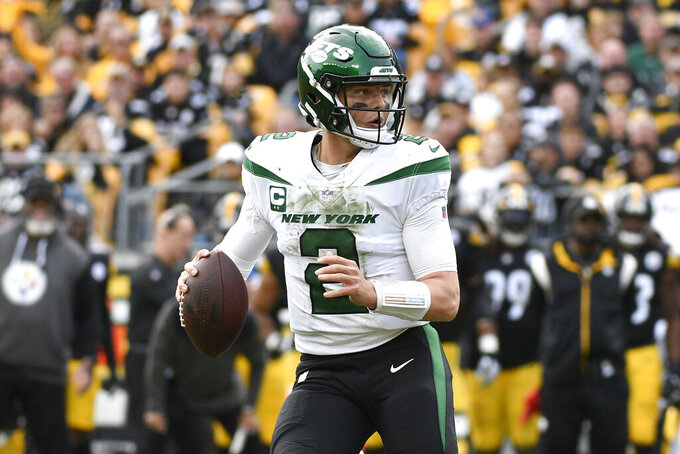 EAST RUTHERFORD, N.J. (AP) — Robert Saleh had a clear message for his team when the New York Jets gathered for offseason workouts in April.

To become a winning franchise, he told them, they need to first start winning their games in the AFC East.

That's no small task for the Jets, who have dropped 12 straight in their division — with the last victory coming in Week 17 against Buffalo to cap the 2019 season.

“The quickest way to the playoffs is to win your division, right?” Saleh said this week. “And that’s the one thing you have control over: beating your division opponents and all that stuff. It’s on our boards: ‘Own the East,’ so if you are trying to become that playoff team, you’ve got to be great in the division, and this organization and this team hasn’t won in a while within the division.”

New York has four consecutive losses each to Miami, Buffalo and New England during that span.

The Jets (2-2) will get a chance to change that trend — and narrative — Sunday at MetLife Stadium when they take on the Dolphins (3-1).

“This is obviously our first opponent, first division opponent, and we’re in a heck of a division with New England, Miami, and Buffalo — three freaking really good football teams,” Saleh said. "We’re looking forward to the opportunity to play Miami.

“They've got weapons all over the place, they’ve got a hell of a head coach and it’s going to be a fun game.”

They usually are between these division rivals, with the Dolphins holding a slight edge — 57-55-1, including playoffs — after having beat the Jets four straight times and eight of the last nine meetings.

“I do understand the history of this rivalry just being a football fan," said Dolphins quarterback Teddy Bridgewater, who is starting in place of the injured Tua Tagovailoa, who suffered a concussion against Cincinnati. "We have an opportunity to get to 3-0 in the division. That would be huge for us. That’s one thing that we emphasize right now.

"We know that we’re playing against a very good Jets team. It’s a young team with some young talent, but those guys are playing some good football. We know that they’re going to give us their best.”

The Dolphins, who could earn the franchise's 500th victory, including playoffs, are coming off their first loss of the season, a 27-15 defeat against Cincinnati. A win against New York would give Miami its first 4-1 start since 2003.

Meanwhile, the New York Jets are trying to get to 3-2 for the first time since 2017 after a fourth-quarter comeback last week in a win at Pittsburgh — led by quarterback Zach Wilson in his first start of the season.

The two were also assistants in 2006 on Gary Kubiak’s staff with the Texans.

“And then we both ended up being let go in Houston at some point," McDaniel said, "and scratching and clawing to stay in the league.”

The two remain close, and Saleh impressed McDaniel back then with his smarts.

“He would always blow my mind because we’d have a problem with our printer,” McDaniel said, “we’re trying to print Visio or Excel or something, and he wouldn’t call IT. He would just open up this manual and figure out how to figure this stuff out.”

McDaniel and Saleh will meet for the first time as head coaches Sunday.

“To just watch him from afar, watch some of his press conferences, talking to some of the guys who are on staff,” Saleh said, “you always knew when he got his opportunity, he was going to seize the moment and take absolute charge and show how, not necessarily strong of a personality, but how convicted he is in his beliefs and his philosophy.”

Tyreek Hill nearly became a member of the Jets in the offseason. There was one big thing that kept it from happening.

“Those state taxes, man,” Hill said. “I realized I had to make a grown-up decision, and here I am in a great city in Miami.”

Hill, acquired by Miami from Kansas City in March, has fit in just fine with his new team. He leads the league in yards receiving (477) and is tied for second with Buffalo’s Stefon Diggs with 31 receptions.

Wilson completed just eight of his first 24 passes for 124 yards through three quarters last week, but he went 10 of 12 for 128 yards while leading two touchdown drives in the final period.

The second-year quarterback's resilience and confidence in crunch time drew raves from teammates and coaches.

“It was great to have Zach back,” safety Lamarcus Joyner said. "After missing the first three (games), he did well coming back. He was composed and mobile and made some really good throws and decisions.”

The Dolphins are 29th in rushing offense through four weeks. They haven’t had a 100-yard rusher and are averaging 3.5 yards per carry.

McDaniel said Miami needed better commitment from him, starting with the plays that are called, and better execution from everyone on the team.

“It’s not unfounded to have a four-game block where you’re down in a phase and that becomes a strength of yours as the season progresses,” McDaniel said. “As a coaching staff and as a team, that’s our plan, for it to progress and become a strength of ours.”