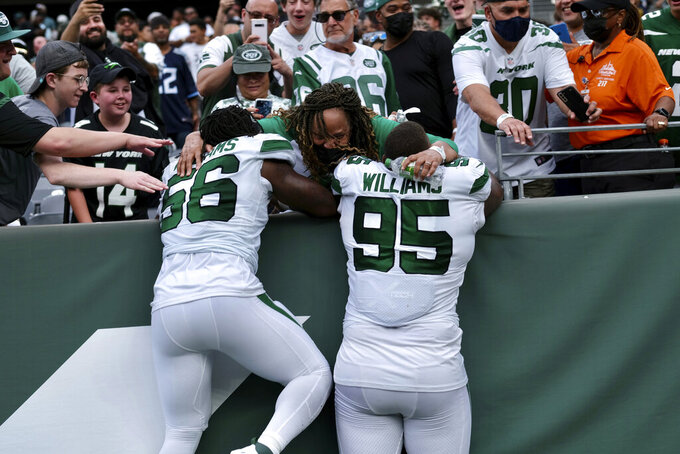 For its current Crucial Catch initiative to bring awareness to the fight against breast cancer, the NFL has perfect spokesmen in Quinnen and Quincy Williams of the New York Jets.

The brothers — Quinnen on the defensive line, Quincy at linebacker — are all too knowledgeable about the disease. Now ambassadors for the American Cancer Society, their mother Marquischa died in 2010 from breast cancer, and they each wear a locket with a picture of her in it.

“It means a lot to me, first and foremost, because my mom passed away, and she had it twice,” says Quinnen, a 2019 first-round draft pick from Alabama. “I see the hardship that people go through and also the most emotional state people go through. I make it my platform to raise awareness and bring a bright light however I can to a negative situation.”

He has done so this fall by visiting pediatric cancer patients at Goryeb Children’s Hospital in Morristown, New Jersey, when he invited patients to a Jets game as honorary captains. They were given the opportunity to watch the game with their families from a suite.

In the days following the draft, Quinnen visited Goryeb as part of an annual tradition of Jets first-rounders, and he has been interviewed by a patient for the “Jets Kid Reporter" series.

Two seasons ago, Quinnen surprised someone at Hope Lodge with tickets to the Super Bowl.

“I get the chance to hear people’s stories and the chance to see some smiles for people going through a bad time,” he says. "I want to reach as many people as I can and with the situation with their families, and for them to know there is somebody out there who cares. They can say, 'There's somebody on a platform for me,' because I am educated on what they are going through. It's an amazing opportunity for me.

"I'll do anything I can to help out with awareness."

As does Quincy, who went in the third round of the same draft to Jacksonville out of Murray State. Quincy played in 18 games with the Jaguars, including eight starts as a rookie. He dealt with injuries last season and was among Jacksonville’s final cuts this summer.

He landed with his brother in New Jersey, and is carrying on the same message about breast cancer and the NFL's annual program to combat it.

The Williams family — well, the brothers — set an NFL mark last Sunday. With both getting sacks against the Titans, it was the first time since the statistic became official in 1982 that brothers took down a quarterback as teammates in the same game.

Naturally, Quinnen and Quincy thought about their mom after the achievement.

“It's a very great opportunity to play with my brother anytime, but this last time we dedicated the game to my mom, and that record was another positive,” Quincy says. “And we did it in October, when we always wear pink, a very important thing. We let people know they are not the only ones going through it.”