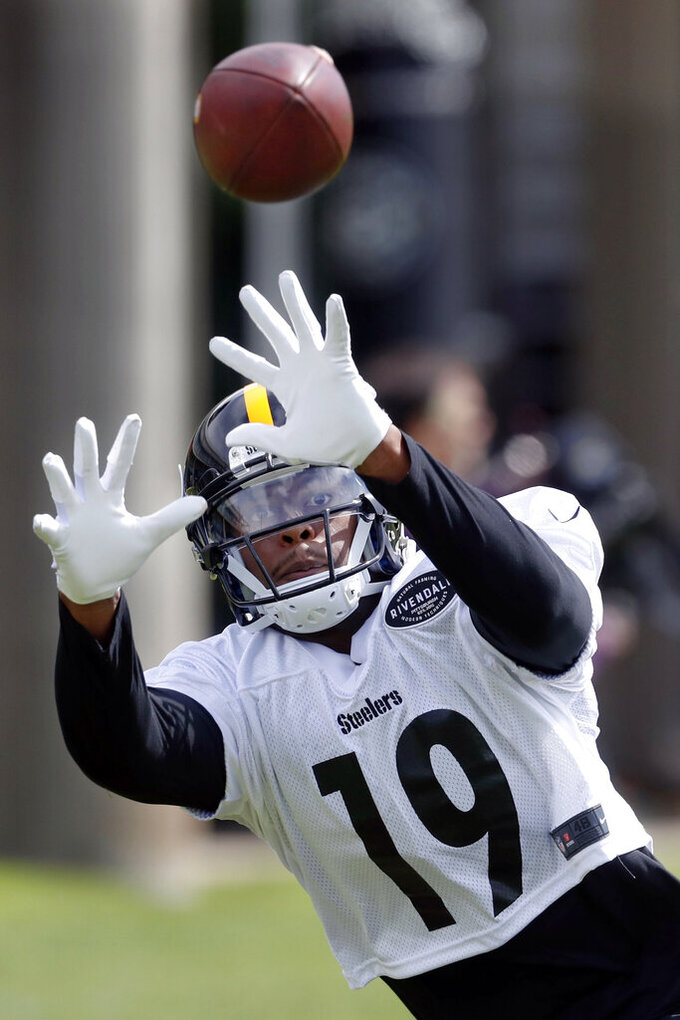 Smith-Schuster was trying to find some middle ground between being appreciative for Antonio Brown's influence while also acknowledging things should be considerably calmer for the Pittsburgh Steelers in 2019. The prolific but petulant Brown now is catching passes in Oakland following a high-profile divorce that included Brown taking thinly veiled public shots at Smith-Schuster.

"The chemistry is on point," Smith-Schuster said Wednesday. "Everyone is on the same page. Everyone is communicating. There's really no — how do you say? — drama in our locker room."

At least not the kind Brown manufactured with regularity during his final two seasons in Pittsburgh, ones that coincided with Smith-Schuster's ascent from the youngest player in the NFL to first-time Pro Bowler. Brown's influence played a major role in Smith-Schuster's rapid development, lessons Smith-Schuster will hold close now that he's the longest-tenured wide receiver in the room.

"I think everyone picked it up, not only us as receivers but everybody on the team," Smith-Schuster said. "They all see how AB worked. They seen how he came out here every day and he just ran hard, 100 percent."

It's all the other stuff — from Brown's occasional social media meltdowns to his hot/cold relationship with quarterback Ben Roethlisberger — that Smith-Schuster and the Steelers want to avoid going forward. Replacing Brown's production on the field will be almost impossible. He's the only player in NFL history to have six straight seasons with at least 100 receptions.

Yet Smith-Schuster is optimistic the group Brown left behind — one that includes second-year man James Washington, free agent signee Donte Moncrief, and third-round pick Diontae Johnson to go with Eli Rogers and Ryan Switzer — can still be effective. Oh, and do it quietly.

"There's so much motivation for everyone," Smith-Schuster said. "You think about last year, having AB and Le'Veon (Bell) and this year not having those two guys, two great players. I think for this year we've got guys like Moncrief, James Conner, it's his time now. It's always been his time. We always want to rock with what we got in the locker room, so at the end of the day, whoever is in that huddle, 11 man, that's what we're going to rock with."

Every band, however, needs a lead singer. With Brown gone, the gig now falls to Smith-Schuster. While stressing offensive production is a "collective" of all 11 players on the field, he's also well aware the spotlight is on him following a season in which he caught 111 passes for 1,426 yards.

"He's going to have an awesome challenge ahead of him for this year and I think he's ready for it," Roethlisberger said.

Smith-Schuster doesn't have much of a choice. He believes he's prepared for the spotlight and doesn't think his age — at 22 and heading into his third pro season, he's still the youngest receiver on the roster, born a few months after Johnson — will be an issue.

"Being a young guy in a room, being 22, I feel like a French bulldog, you know, just barking at everybody," he said. "At the same time, they've got dogs too, so they can bark. I like that role."

For proof look no further than his rollicking Instagram account , one he doesn't use to vent his frustrations — a Brown staple — but rather highlight his "YOLO" (You Only Live Once) philosophy. If he's not shooting selfie videos of him dancing in his car, he's hosting a water balloon fight , walking his dog Boujee, or looking for someone to play Fortnite with.

His free-spirited touchdown celebrations made him an instant fan favorite when he broke into the league in 2018. But Smith-Schuster stressed he won't let the rise of his own stardom get in the way of the bigger picture. He has no plans to get caught up in trying to match whatever numbers Brown puts up in Oakland this fall. Yes, gaudy statistics are nice. They're also not the point.

"I'm looking at mine, my own team, how we do and how we win," he said. "I'm fine. I would take five catches for 30 yards and win the game than have 10 catches, two touchdowns. It's not really about myself at the end of the day. It's about the Super Bowl."

That's a destination the Steelers believe remains within reach even with Brown on the opposite coast. Replacing him will be a group effort, one now led by a chatty, amicable and confident third-year pro who is intent on making sure his ego doesn't get in the way.

"There's no need for me to go out of my way and yell at the guys," he said. "We're all adults here. We all know what's right from wrong and everyone just works. Everyone has a voice in a room. It's not just mine."