The Latest: Patriots' Andrews has Georgia on his mind 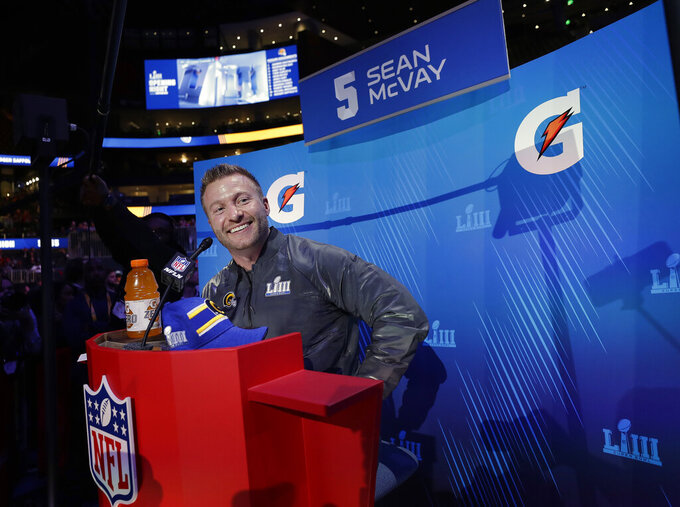 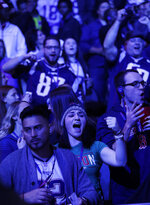 ATLANTA (AP) — The Latest on Super Bowl 53 in Atlanta (all times EST):

Andrews never thought he'd be working out at Georgia Tech's practice facility. The opportunity gave him the idea of pulling off a college prank.

"I thought about bringing a bunch of Georgia stickers and sticking them around the facility," Andrews said, smiling.

He resisted, but he still represented his alma mater.

"We were in there working out today and I had my Georgia 'G' shirt on," he said.

Bill Belichick has been mostly coy about his relationship with Rams coach Sean McVay, saying only that he had met him and that he had a lot of respect for the job the 33-year-old, first-time head coach has done in Los Angeles.

But according to McVay, he and the coach of five-time Super Bowl champion Patriots have become texting buddies — sort of.

McVay says he received a congratulatory text from Belichick after the Rams' 38-31 victory over the Vikings back on Sept. 27.

"For him to take the time to say congratulations with all the things he's got going on, it means a lot," McVay said at Monday's media night at State Farm Arena.

The coaches met for the first time when the Patriots held a joint practice with the Redskins in 2014. McVay was in his first season as the Redskins' offensive coordinator at the time.

If Los Angeles beats New England on Sunday, McVay will become the youngest coach to win a Super Bowl. Belichick can become the oldest to win one at age 66.

The greatest of all time? Rams running back C.J. Anderson says there's no question that honor belongs to New England quarterback Tom Brady.

The greatest in Sunday's Super Bowl 53? Anderson says that could be a different answer.

"I've always looked up to Tom," Anderson said at Monday's media night at State Farm Arena. "He's always been inspiring and how he continues to prove people wrong. To be a late-round pick guy at 199, I've always respected what he does. He's the best at what he does. Obviously he's the GOAT of our game."

Sure, he's old enough to be their father — or, for most of them, their grandfather.

But the Rams defensive coordinator still knows how to bridge the generation gap.

When cornerback Aqib Talib was poking at the 71-year-old Phillips, asking him how he was able to stay on top of his game after so long in the NFL, Phillips shot back, "I've been poppin' since my demo."

"That's a Future lyric from a song that Future just dropped, like not even a month old," safety John Johnson III marveled. "Why does a 70-year-old man know that? Why?"

Phillips flashed that sly grin of his when Johnson's comments were relayed to him on the floor of State Farm Arena.

"I just pick up stuff every once in a while," the silver-haired coordinator said. "And I ask them what they're talking about."

So, is Future his favorite rapper?

"Nah," Phillips said. "I'm still with Drake, because I started at the bottom and I'm here right now."

They weren't on podiums and were able to break away from the throngs of onlookers and pretend media on the floor of the State Farm Arena.

So Marcus Peters and Dante Fowler Jr., walked onto a makeshift stage Monday night and played a tossing game for the Nickelodeon show "Double Dare."

Several other Rams wandered over to participate, perhaps seeking a return to their childhoods. Not a bad idea to escape from the madness of Super Bowl Media Night.

Despite concerns about wintry weather in Atlanta on Tuesday, the forecast for the Super Bowl is much more promising. The Weather Channel is predicting a high of 58 degrees Fahrenheit (14.44 Celsius) and a low of 50 on Sunday, with a chance of occasional rain.

Atlanta Falcons owner Arthur Blank said Monday the weather should allow the retractable roof at Mercedes-Benz Stadium to be open for at least some part of the day's schedule.

Tim McGraw will headline the Super Bowl pregame festivities in Atlanta on Sunday.

His performance will take place at the NFL Tailgate Party, and his new single "Thought About You" will be televised live on CBS' Super Bowl pregame show.

McGraw is married to fellow country music star Faith Hill. She performed the national anthem at the previous Super Bowl in Atlanta after the 1999 season and sang "America the Beautiful" at the Super Bowl after the 2008 season.

Earlier on Super Bowl Sunday, Aloe Blacc will perform at the NFL Tailgate Party. He will be joined onstage by Atlanta's David Walker & High Praise for a live televised performance on the pregame show.

Arizona Cardinals President Michael Bidwill will receive the Paul Tagliabue Award from the Fritz Pollard Alliance on Thursday in Atlanta.

The award is given to a person who demonstrates the integrity and leadership former NFL Commissioner Tagliabue exhibited in career development opportunities for minority candidates and advocacy for diversity on the league and club level. It was established in 2012 by the Fritz Pollard Alliance, which was created to promote diversity and equality of job opportunity in the coaching, front office and scouting staffs of NFL teams.

"The Bidwill family has always done the right thing on issues of equality, from the days when Adele Harris was PR and community relations director back in St. Louis to the current day," said John Wooten, chairman of the alliance. "Michael's leadership has been a critical component in carrying the Cardinals' legacy of equal opportunity forward."

The Los Angeles Rams are a slight underdog against the New England Patriots in Sunday's Super Bowl.

In the video game maker's simulation of the NFL's championship game on "Madden NFL 19," the Rams defeated the Patriots 30-27. All-Pro defensive tackle Aaron Donald was named the Most Valuable Player for his four-sack performance.

Tom Brady led the Patriots to a 17-3 halftime lead, but the Rams rallied in the second half and won the game on Todd Gurley's 5-yard touchdown run.

The NFL is launching a yearlong celebration for its centennial season.

The campaign, "NFL100", will kick off during the Super Bowl with "The 100-Year Game," a commercial to air during Sunday's broadcast on CBS. It will pay tribute to the moments, players and images from around the league. The spot will include more than 40 current and former NFL players, including 19 Hall of Famers.

The events begin during the draft in April in Nashville, Tennessee, and will build leading up to the first game of the 100th season in the fall. The NFL100 celebration will last throughout the season and will culminate at next season's Super Bowl in Miami on Feb. 2, 2020.