The Latest: USL's Indy Eleven to return with limited fans 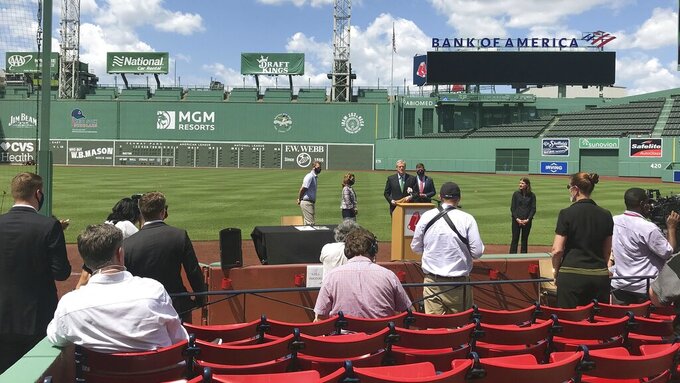 Massachusetts Gov. Charlie Baker, at podium, speaks about Phase 3 of the state's reopening plan during a media availability at Fenway Park, Thursday, July 2, 2020, in Boston. In most of the state, Phase 3 will begin on Monday. In Boston, the Phase 3 reopening will begin a full week later, on July 13. (AP Photo/Jimmy Golen)

The United Soccer League’s Indy Eleven will return to action next Saturday with limited fans at Lucas Oil Stadium.

League officials announced a 263-game schedule that will be played over a 13-week span, leading to a 16-team playoff scheduled for October.

Indy also released a nearly 2,000-word document about changes that will be implemented at the stadium, home of the NFL’s Indianapolis Colts, to protect those inside from COVID-19.

Changes include mandatory face coverings inside the stadium except when people are eating or drinking, limiting groups to four or fewer tickets, separating those groups with at least four empty seats and using a minimum of every other row to maintain social distancing.

Tailgating will not be permitted. Fans also will enter the stadium in staggered 15-minute shifts and will exit by row with those nearest the exits leaving first.

Each ticket holder also will be asked if they’ve been in close contact with anyone who had a confirmed case of COVID-19 and if they are experiencing specific symptoms of the illness before they can undergo a temperature check. Anyone topping 100.4 degrees will not be admitted, though fans can request a recheck after a cooling down period.

Players, referees and staff who are not competing on the field also will be required to wear face coverings. Flag bearers, player escorts and ball kids will not be used, and players will be discouraged from celebrating with hugs or high-fives.

Ten of Indy’s 15 remaining games will be played at Lucas Oil Stadium.

Indianapolis also will be hosting the first NHRA drag racing events next Saturday with limited fans in attendance.

The Boston Red Sox are getting ready to open their spring training reboot at Fenway Park.

On Thursday, a day before the team was scheduled to hold its first workouts, weights and exercise equipment were set up in the concourse to allow players to work out with more social distancing than the usual cramped facilities would allow.

Masked grounds crew members worked to get the field ready.

Baseball suspended spring training in March because of the coronavirus outbreak and delayed opening day. The players and owners agreed last month to try again, with teams reporting for workouts on Friday and the first games of a 60-game schedule to be played in empty ballparks on July 23 or 24.

Massachusetts Gov. Charlie Baker was at Fenway on Thursday to sign an order allowing the Red Sox to open the ballpark without fans as the state launches Phase 3 of its reopening plan.

The New York Post was first to report that the 60-year-old Davis won’t be on site at Citi Field for the beginning of practices because of concerns about the coronavirus.

“The timeline for him to join us is uncertain yet,” new Mets manager Luis Rojas said on a video call Thursday.

The Post, citing anonymous sources in its report, said Davis does not have the virus.

Rojas said all other coaches and players have reported for intake screening. Assistant hitting coach Tom Slater will substitute on site for Davis, who lives in Arizona during the offseason.

“I think we’re going to get the best of Chili whether he’s with us at the start of camp or whether he’s working remotely. I mean, we’re in constant communication. Chili and I practically talk every day and he’s in communication with the coaches,” Rojas said. “So he’s going to be helping us. He’s a great asset, he’s got great knowledge, great experience. He helps the players with hitting, with playing the game. He helps the coaches as well with his view of the game. So he is going to be working remotely and we’re going to feel his presence.”

Boise State is cutting its baseball and women’s swimming and diving programs as a result of the COVID-19 pandemic.

The program cuts, along with additional department and program operating reductions, will reduce the overall athletic budget by nearly $3 million.

“This is one of the hardest decisions athletic departments have to make, but it comes at a time when we are facing the most serious financial challenge we have ever seen,” Boise State athletic director Curt Apsey said in a statement Thursday.

The cut to baseball comes after the program was recently reinstated. The school announced in 2017 that baseball was being added after it had been discontinued following the 1980 season. The 2020 season was Boise State’s return, but the Broncos played only 14 games before the season was canceled.

The school said all scholarships for athletes in the affected programs, including incoming 2020 signings, will be honored.

Finishers of the virtual Boston Marathon will receive their medals in an Amazon package instead of having a volunteer drape it around their necks on Boylston Street.

Race organizers announced plans for the event on Thursday. Runners will have from Sept. 7-14 to complete the 26.2-mile distance and submit proof. There is no time limit, but it must be completed in one continuous run.

Also included in the post-race package will be a participation shirt, a program, a bottle opener and other unspecified celebratory items.

The virtual race is open for those who had already registered for the real one, which was scheduled for April 20 and then put off until Sept. 14 before it was canceled. The cost to register for the virtual race is $50.

The Boston Athletic Association says it is encouraging the more than 10,000 volunteers who had signed up to give back to their communities in another way. They can receive their volunteer jacket or donate it to a front-line worker.

The French Open will be held with fans when it starts in September.

The French Tennis Federation has written on Twitter that tickets will go on sale to the general public on July 16. The FFT did not give more information as to how many fans will be allowed at Roland Garros for the Sept. 27-Oct. Oct. 11 tournament.

The clay-court tournament had been scheduled to start on May 24. It then got postponed to Sept. 20 because of the coronavirus pandemic and then pushed back another week.

The FFT has prepared a health and safety protocol to ensure the safety of fans.

West Indies cricket coach Phil Simmons has mixed with his squad again in Manchester after passing his latest test for the coronavirus.

Simmons returned from his father-in-law’s funeral last week and had been self-isolating in his hotel room at Old Trafford.

He had been watching the team’s intrasquad match from his balcony but was allowed to interact with his players after passing a third consecutive virus test.

The first test against England starts on Wednesday.

The cancellation of the Wimbledon tennis tournament has led to a “berry” big boon for health care workers in London.

The All England Club says it will donate 200 portions of strawberries to workers on the front line of the coronavirus pandemic every day.

The club says more than 26,000 strawberries that would have been used for Wimbledon are being prepared by staff for delivery.

Wimbledon says it is a “small gesture of appreciation for the dedicated service of the NHS during what would have been The Championships Fortnight.”

Wimbledon was canceled this year for the first time since World War II because of the pandemic. The tournament had been scheduled to start on Monday.

The link between Wimbledon and strawberries is muddy but the main theory has to do with timing. Strawberry season in Britain just happens to coincide with the tennis tournament.

Novak Djokovic says he and his wife have now tested negative for the coronavirus.

The top-ranked player tested positive for the virus after playing in an exhibition series he organized in Serbia and Croatia with zero social distancing amid the pandemic.

His media team says “Novak Djokovic and his wife Jelena are negative for COVID-19. That was shown by the results of the PCR tests that both had in Belgrade.”

The statement says both had no symptoms and that they were in self-isolation in the Serbian capital since testing positive 10 days ago.

Djokovic was the fourth player to come down with the virus after participating in matches held in Belgrade and Zadar, Croatia. The others were three-time Grand Slam semifinalist Grigor Dimitrov, Borna Coric and Viktor Troicki.

The Swiss league leaders say they allowed Boris Babić to make the two-week trip while recovering from a serious knee injury.

The 22-year-old forward tested positive upon his return. The club says he does not have symptoms and is in self-quarantine.

St. Gallen says Babić has not had contact with his teammates.

Attention on Serbia’s rising number of coronavirus cases followed Novak Djokovic and three other tennis players testing positive at a tournament he organized in Serbia and Croatia last month.