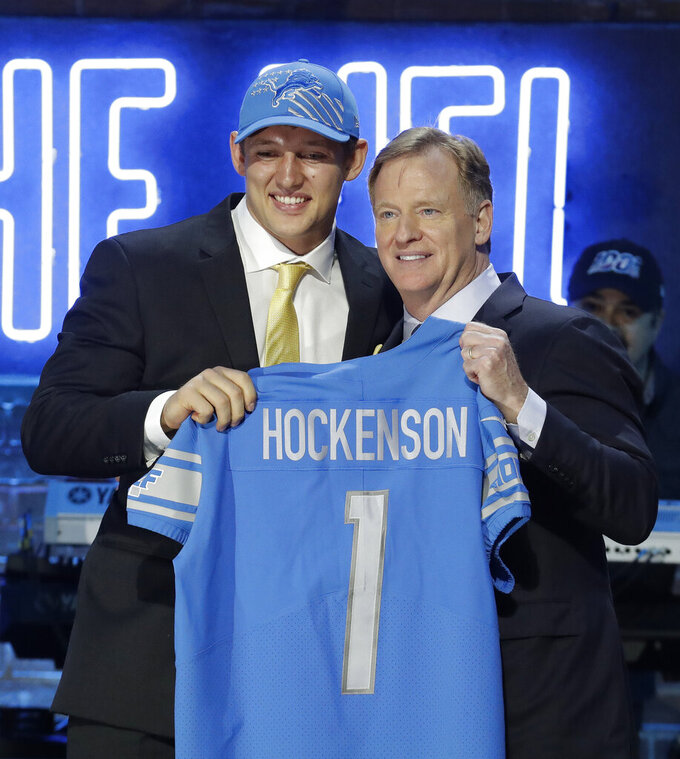 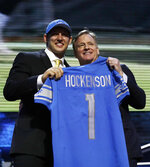 Detroit selected Iowa tight end T.J. Hockenson with the No. 8 overall pick in the NFL draft Thursday night, deciding he was too good to pass up after considering trading their first-round pick to acquire more selections. Tight ends are becoming a position where teams want difference-makers — and the Lions are hoping they've finally found one who will pan out for them.

"The game is always moving toward the tight end position," Detroit coach Matt Patricia said. "That's the mismatch everybody is trying to figure out."

Detroit drafted Eric Ebron No. 10 overall in 2014 and Brandon Pettigrew a decade ago with the 20th pick overall and ended up releasing both. Ebron ended up flourishing last season with the Indianapolis Colts and seems to keep tabs on his old team via social media .

"We're not going to revisit a draft I wasn't even a part of," Quinn said after making his fourth first-round pick in charge of a front office.

Since taking Pettigrew in 2009, the only other tight end selected among the top 20 picks in the NFL draft was O.J. Howard, who was taken No. 19 by Tampa Bay in 2017. The last time a team took a tight end No. 8 or higher was when San Francisco selected Vernon Davis sixth overall in 2006.

Hockenson insisted he doesn't feel a need to prove he was worth the investment.

"I don't put pressure on myself," he said.

Hockenson won the John Mackey Award last year, honoring the college football's top tight end. He had 73 receptions for 1,080 yards and nine receiving touchdowns in his career with the Hawkeyes, who also counted on him being a key blocker.

"He can do the dirty work in the run game, get open in the passing game," Patricia said. "Really puts a lot of pressure on the defense. He's a real, tough guy to tackle. He does a good job of turning small plays into big plays."

The 6-foot-5, 251-pound Hockenson, who is from Chariton, Iowa, was a second-team All-America and first-team All-Big Ten player last season. He led Iowa with 760 yards receiving and was second on the team with 49 receptions and six touchdowns.

"It's become a valued position," Hockenson said. "A three-down tight end who can run past defenders when needed and block when needed is special."

Detroit's new offensive coordinator, Darrell Bevell , will have a chance to put two receivers on the field with James and Hockenson. In four years with the Pittsburgh Steelers, James had 120 receptions for 1,189 yards and nine touchdowns.

The Lions needed to invest in pass-catching options for quarterback Matthew Stafford. Until taking Hockenson, the franchise had drafted only one receiver (Kenny Golladay) and one tight end (Michael Roberts) since the 2014 draft when it selected Ebron and that led to the offense struggling last season.

Outside and inside the organization, drafting Hockenson seemed likely if he was available.

"He's a guy we targeted early in the process," Quinn said. "He's a three-down, four-down player that is going to be a big part of our offense."

During the draft Friday night and Saturday, Detroit may look to fill voids at wide receiver, offensive guard and safety.

The Lions need all the help they can get after losing seven of their last 10 games under Patricia in his first year and finishing with double digits in losses for the first time since 2012. They went into the draft with fewer needs after making many moves in free agency.