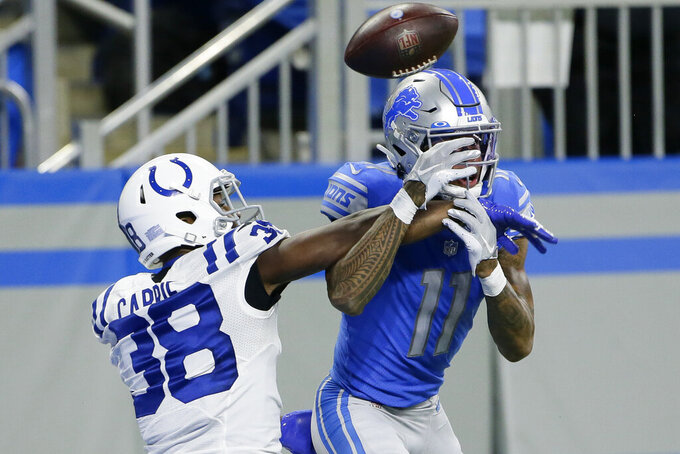 DETROIT (AP) — Two wins brought Matt Patricia and the Detroit Lions a bit of a reprieve.

Then the team returned home and fell flat once again.

The Lions lost 41-21 to Indianapolis on Sunday, slipping back below .500 and again looking like a team that is a step behind the playoff contenders in the NFC.

Detroit, of course, isn't out of it by any means — and the schedule looks favorable for a few more weeks — but last weekend's loss raised more questions about whether this team has really made any progress lately.

“None of us are happy about the game yesterday,” said Patricia, now in his third season as Detroit's coach. “We played a bad football game yesterday. That's something we really haven't done a lot of, as far as a game overall. We've been in some close games, some tight games.”

Sunday's matchup wasn't all that close — even though the Lions (3-4) scored first, as they've done in every game this season. Detroit's offense was mostly inept in the first half, and the running game in particular was no factor.

On Monday, Patricia had some more bad news to pass along when he said defensive lineman Trey Flowers was going on short-term injured reserve. Also, receiver Kenny Golladay left Sunday's game with a hip problem. Patricia described Golladay's status as “day by day and week by week."

Detroit entered this game on a two-game winning streak, but those victories were against Jacksonville and Atlanta, who now have a combined record of 3-12. The loss to the Colts was clearly a step backward for the Lions.

“We need each and every individual to buy in and do everything they need to do to be their best them,” defensive back Justin Coleman said. “We've got some games ahead of us, and we got a lot to look forward to.”

The Lions don't have a lot to feel good about after this game, but no matter how far behind they are, they can usually count on quarterback Matthew Stafford to have at least one impressive stretch. Stafford led a nice drive near the end of the first half, but it ended in a missed field goal. At the start of the third quarter, the Lions marched down the field again and scored a touchdown that cut the Indianapolis lead to six, but that was as close as they would get.

There's a lot to improve on after last weekend — and Detroit's flat start was a bit of a surprise. Although the Lions scored first, that touchdown came after a blocked punt in what was an otherwise listless first half for Detroit. In past defeats, the Lions have had trouble holding double-digit leads, but they never even put themselves in that position this time.

“For us to be able to score first in all of our games, that's pretty remarkable in the NFL,” Patricia said. “But obviously, we want to win all those games, and that's where we have to do a better job.”

T.J. Hockenson had seven catches for 65 yards against Indianapolis. That was a week after he caught the winning touchdown at Atlanta. The Lions may need to lean on the second-year tight end if Golladay is out for a while.

Rookie running back D'Andre Swift has shown promise this season, but he managed only 1 yard on six carries Sunday, along with three catches for 22 yards.

Patricia said Flowers' injury was a new one that happened in the game Sunday. In addition to Golladay, wide receiver Jamal Agnew (ribs) and tackle Halapoulivaati Vaitai (foot) also left the game.

7 — The number of consecutive home losses for the Lions. Detroit obviously doesn't have a big crowd to help out in home games this season, but it's still a little odd to see the team having so many problems at Ford Field. The Lions haven't won at home since October 2019.

The next four opponents on Detroit's schedule — Minnesota, Washington, Carolina and Houston — all have losing records. The Lions play on the road against the Vikings this coming Sunday.