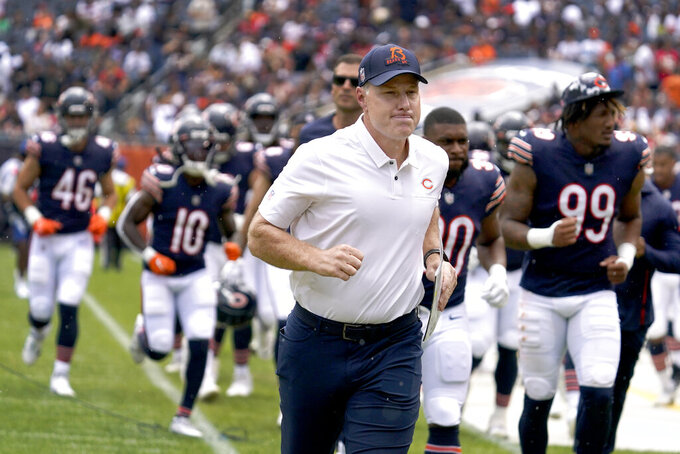 CHICAGO (AP) — Patrick Mahomes sure looked like he was ready to go. The one-time MVP, Super Bowl champion and four-time Pro Bowler made it look easy in his short time on the field.

Mahomes threw for 60 yards and a touchdown on Kansas City's first possession, then watched as the Chiefs lost to the Chicago Bears 19-14 in the preseason opener Saturday.

“We did what we were supposed to do,” Mahomes said. “We went out there, we were able to spread the football around, get a lot of different guys involved and found a way to get in the end zone.”

The game was the first for Chicago's Matt Eberflus as a head coach. It also marked the return to Soldier Field for predecessor Matt Nagy, now the Chiefs' quarterbacks coach. He was fired in January after leading the Bears to a 34-31 record in four seasons, then reunited with Andy Reid after previously working for him in Philadelphia and Kansas City.

Chiefs safety Justin Reid showed he could be an emergency kicker, nailing an extra point after Justin Watson caught a 22-yard touchdown from Shane Buechele in the closing seconds of the first half. Reid, who made a 65-yard field goal in a training camp practice, sent the kick right through the middle of the uprights to make it 14-0.

Reid said the coaches told him he might get an opportunity if he looked good practicing kicks during warmups.

“Pregame went pretty well, and I got the opportunity and it went down the middle,” he said. “That was awesome.”

Mahomes had no trouble playing on a chopped-up field that drew heavy criticism from the president of the NFL Players Association. He also picked apart a defense missing its two best players, with linebacker Roquan Smith in a contract standoff and the Bears holding out star pass rusher Robert Quinn.

Mahomes was 6 of 7 passing on a 72-yard drive after Chicago went three-and-out on the game's first possession. The completions were to six different receivers, which could be more of the norm after the Chiefs traded Tyreek Hill to Miami. Mahomes dumped the ball off to Blake Bell for a 5-yard TD, capping an 11-play possession — then called it a day.

“I think it's gonna come from everywhere this year,” he said. “It's gonna be hard for teams to game-plan against. ... I think the guys have kind of embraced that.”

Chicago's Justin Fields, trying to build on a shaky rookie season, was 4 of 7 for 48 yards. He played three possessions before veteran Trevor Siemian replaced him.

“I think we can improve at everything," Fields said. "Coming up on the ball, executing better. Of course there were plays where we didn’t execute as well as we wanted to, so just continually getting better each and every day and keep stacking these days.”

Smith ran and stretched during warmups and watched the game from the sideline. He threw down the gauntlet this week by going public with a trade request while insisting the Bears were not negotiating in good faith on an extension with his rookie contract expiring after this season. Management clapped back by removing him from the physically unable to perform list, opening up the possibility of fines for missing practices.

Jack Sanborn had an interception and fumble recovery in the third quarter, leading to a touchdown and field goal.

Siemian was 7 of 13 for 89 yards and two touchdowns. He threw a 12-yard TD to Trestan Ebner early in the third quarter after Sanborn picked off Buechele and a 13-yarder to Dazz Newsome that cut it to 14-13.

Cairo Santos put Chicago on top 16-14 after Sanborn recovered a fumble by running back Derrick Gore and added a 47-yarder to bump the lead to five with about six minutes left in the game.

“I think the guys did well," Eberflus said. "Just an overarching view of it, the guys operated well, there were no pre-snap penalties, very few penalties at all. I thought the kicking game operated really nice. And really, the defense played well, you know, in the second half."

Chiefs: Bell hobbled off the field with a hip injury after the Chiefs ran the ball on the first play of their second possession. ... RB Derrick Gore (neck) exited in the third.

Bears: CB Jayson Stanley (knee) left after he was injured covering a punt in the second quarter. ... DB Michael Joseph (hamstring) limped off the field in the second after he landed awkwardly defending a pass. ... LB Javin White (knee) left in the third.

Chiefs: Host Washington on next Saturday.