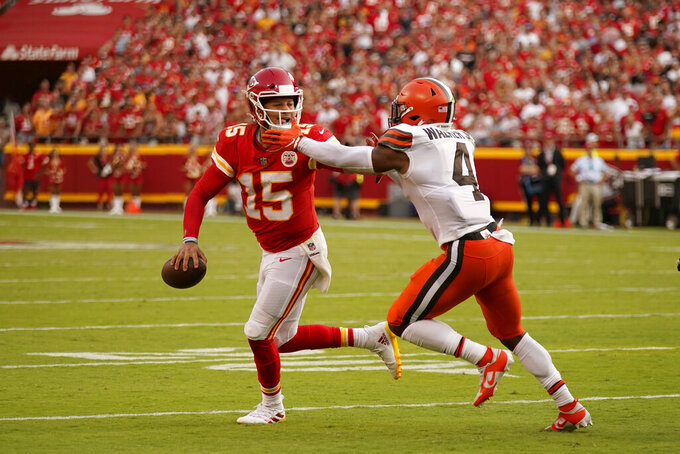 Leave it to Sammy Watkins — who has played for both teams recently — to set the stage for this weekend's Ravens-Chiefs matchup.

Patrick Mahomes and Lamar Jackson can downplay it all they want, but this game is first and foremost a clash between two MVP quarterbacks.

“I think those guys definitely view it that way,” said Watkins, now a receiver for Baltimore. “You can say you're not, but the world is watching two of the best, youngest MVPs in the league, and very talented guys. I'm definitely looking at it that way. Like, man, Lamar needs to win.”

This is the fourth straight season Baltimore and Kansas City will face off, and Jackson has yet to beat Mahomes and the Chiefs. The Baltimore quarterback is 30-5 as a starter in the regular season against everybody else.

The Ravens will be at home for Sunday night's game, but Kansas City won 34-20 at Baltimore last year, and the Chiefs have 11 straight regular-season road victories overall.

“When two good teams play each other, there’s always going to be a lot of hype and a lot of buildup to the game,” Mahomes said. “Seeing Lamar and all the success that he’s had with that team, you know two of the top teams in the AFC, so we’re going to have to battle every year it seems like in the playoffs or whenever it is.”

The Ravens still have to show they can measure up against Kansas City — and now there's added pressure on Baltimore, which is trying to avoid an 0-2 start. The Ravens dropped their opener for the first time since 2015, losing 33-27 in overtime at Las Vegas on Monday night.

The Chiefs, meanwhile, haven't lost in the month of September since 2016. Mahomes is 11-0 in September as a starter, with 35 touchdown passes and no interceptions in those games.

Watkins played three seasons with the Chiefs before signing with Baltimore this offseason. He says he can be a resource for defensive coordinator Don “Wink” Martindale.

“I’m trying to win," Watkins said. “Snitch or no snitch, anything I can give Wink and the defense, that’s what I’m going to do. Not particularly giving up plays, but, ‘Hey man, do this on this guy, and do this on that guy.’”

The Ravens traded tackle Orlando Brown Jr. to Kansas City in the offseason.

The Ravens and Chiefs rank last and next-to-last in the NFL in total defense after one week. They allowed a combined 948 yards in their openers.

The Chiefs are certainly the healthier team. Baltimore lost running backs J.K. Dobbins and Gus Edwards to serious knee injuries before the season started. Defensive back Marcus Peters is also out for the season.

The Ravens were still able to run the ball against the Raiders. Ty'Son Williams rushed for 65 yards and a touchdown in his NFL debut. The injuries led Baltimore to bring in veteran running backs Latavius Murray, Le'Veon Bell and Devonta Freeman, although only Murray played in the opener.

Freeman was promoted to the active roster Thursday.

“We have four good guys in here, and those guys are all going to be a big part of what we're doing going forward,” coach John Harbaugh said.

Jackson is a big reason Baltimore can still rack up big rushing numbers despite all the injuries in the backfield. The 2019 MVP ran for 86 yards against the Raiders, although he did lose two fumbles.

Jackson also threw for 235 yards and a touchdown.

“You can tell he has a better understanding of the offense, just like I have,” Mahomes said. “When you first get out there, me in my first year and him in his first year, you have to rely on your playmaking capability. But as you kind of continue to learn and evolve as a passer and you learn different things in this league and you see different defenses, you understand little tricks of the trade.”