Mariota eager to live up to expectations as Falcons new QB 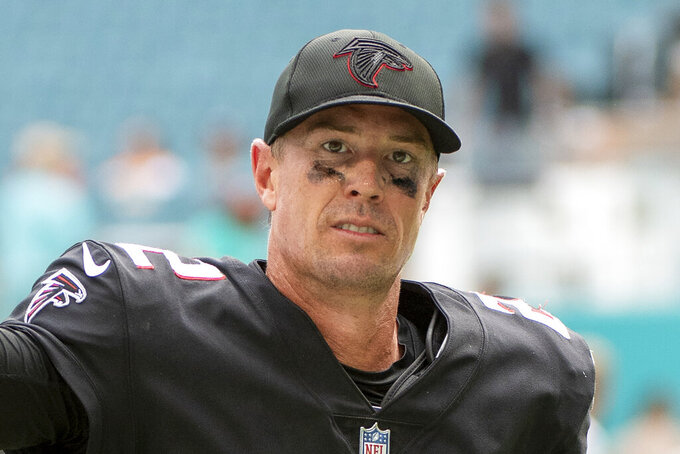 ATLANTA (AP) — Marcus Mariota has already addressed the most immediate issue with his new team.

Pro Bowl tight end Kyle Pitts already had Mariota's preferred number. The quarterback wasn't about to ask Pitts to give it up, so he plans to go with the digit he wore when he first started playing football as a kid in Hawaii.

“It's kind of a full-circle moment for me,” Mariota said. “When I started playing Pop Warner, the first number I got was ‘1.’ I'm going to go back to that, which is kind of cool.”

Mariota will soon have more pressing matters than the number on his jersey.

A former No. 2 overall draft pick, he's looking to get his career back on track after spending much of the last three years as a backup.

Mariota has some huge shoes to fill in Atlanta, where Matt Ryan started at quarterback the last 14 years.

“Something I've learned over the course of my career is you can't compare yourself to other people,” Mariota said. “What Matt accomplished here was truly great, but I've got to carve my own path."

Mariota was certainly on the fast track when he won the 2014 Heisman Trophy at Oregon, leading the Ducks to the national championship game, and then heard his name called second in the NFL draft by the Tennessee Titans.

Mariota was the Titans' starter for most of his first four seasons, which included a playoff win in 2017. But he didn't develop into the elite quarterback that Tennessee expected, putting him on a bit of a hot seat heading into 2019.

After Mariota threw two picks and was sacked three times in a Week 6 game at Denver, Ryan Tannehill took over at QB. After the Titans lost 16-0 to drop to 2-4, Tannehill got the start the following week.

With Tannehill taking over, the Titans went 7-3 the rest of the way, earned a wild-card playoff berth, and made an improbable run to the the AFC championship game before losing to the Chiefs.

Mariota finished out 2019 as Tannehill's backup and then signed with the Las Vegas Raiders, where he spent the past two seasons behind Derek Carr.

Looking back, Mariota said he wasn't vocal enough when it came to expressing what plays he wanted to run. He stressed that won't be the case in Atlanta, where he'll be reunited with former Titans offensive coordinator Arthur Smith, who is heading into his second season as the Falcons head coach.

“We kind of got rolling early on in that (2019) season, but then things kind of fell apart,” Mariota recalled. “That had to do with me not communicating to Art things I thought could be successful and things I thought were working well. ”

The Falcons made a bid for Deshaun Watson to take over as their new quarterback, but he wound up agreeing to a deal with the Cleveland Browns.

The failed pursuit of Watson left Ryan in a most uncomfortable position, so the Falcons hastily worked out a a trade with the Indianapolis Colts for a third-round draft pick.

Shortly after the deal was announced, the Falcons agreed to terms with Mariota, who was a free agent and looking for a chance to start again.

With only one other quarterback on the roster, the Falcons certainly intend to add to that position. They could be looking for Ryan's long-term successor in the draft after attending pro days for Malik Willis of Liberty, Kenny Pickett of Pittsburgh, Matt Corral of Ole Miss and Desmond Ridder of Cincinnati.

In the meantime, it looks like Mariota will get first crack at the starting job.

He's eager to live up to the expectations that so many had for him back in 2015.

“The last couple of years have been a great resource for me,” Mariota said. “I had a chance to step back and learn, and I feel like I've done that. I think these experiences have created a lot of value for me and I can help the team in a lot of different ways.”