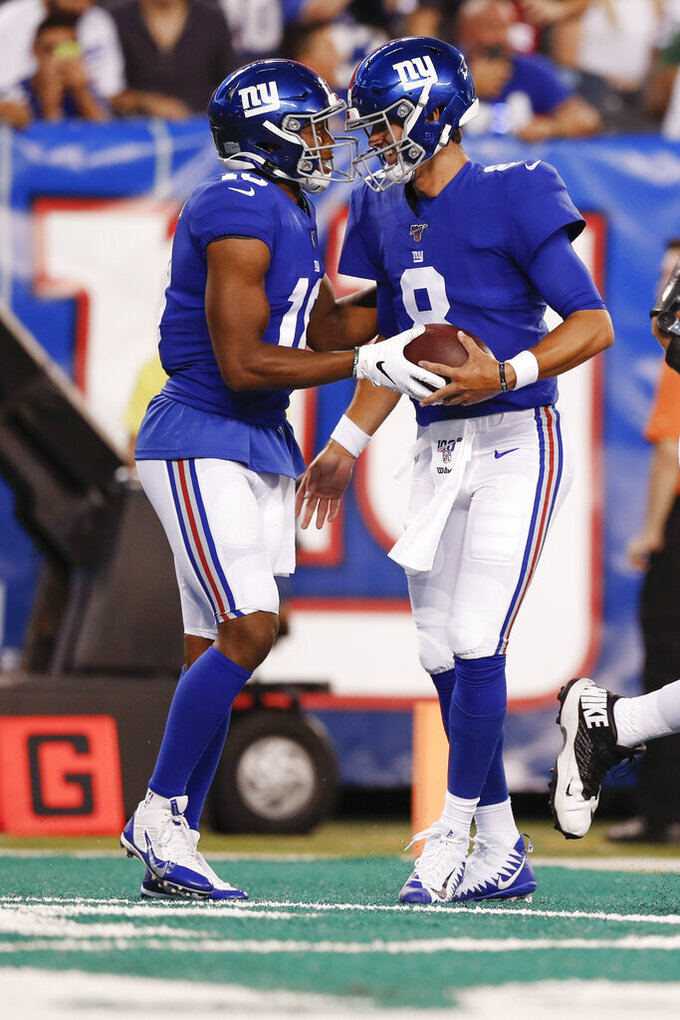 New York Giants quarterback Daniel Jones (8) celebrates with Bennie Fowler (18) after they connected for a touchdown during the first half of the team's preseason NFL football game against the New York Jets on Thursday, Aug. 8, 2019, in East Rutherford, N.J. (AP Photo/Michael Owens)

Cam Newton is expected to see his first game action since Dec. 17 when the Carolina Panthers host the Buffalo Bills on Friday night.

Newton, the league MVP in 2015, missed the final two games of last season and underwent arthroscopic surgery on his right shoulder in January. He and Carolina's other starters did not play in the first preseason game against the Bears.

Wide receiver Curtis Samuel was the star of training camp for the Panthers. His speed, quickness and ability to create separation are quickly turning him into Newton's favorite offensive option. Samuel will step into a starting role in his third NFL season and play alongside D.J. Moore after the Panthers let Devin Funchess leave in free agency.

Panthers rookie first-round draft pick Brian Burns had two sacks against the Bears and has looked dominant in Carolina's 3-4 defense. However, Burns tweaked his ankle Tuesday in a joint practice with the Bills. He tried to practice Wednesday, but couldn't. Burns said he plans to play against Buffalo, but it's possible coach Ron Rivera will err on the side of caution and keep Burns out.

Bills quarterback Josh Allen gets an opportunity to carry over what was an encouraging performance during two days of practices with the Panthers.

Aside from continuing to develop rapport with new receivers Cole Beasley and John Brown, Allen took time to get advice from Panthers star linebacker Luke Kuechly on how he defended against certain plays.

Running back LeSean McCoy is expected to make his preseason debut after fellow veteran Frank Gore started in Buffalo's preseason-opening win over Indianapolis. And there will also be focus placed on rookie running back Devin Singletary to see if he can build on the production — 27 yards rushing and 21 yards receiving — he had against the Colts.

Giants rookie quarterback Daniel Jones gets another chance to impress in the teams' first preseason matchup since 2012.

Jones was 5 for 5 for 67 yards and a TD pass in last week's preseason opener against the Jets.

Jones and Eli Manning and both played one series. Both should see more action against Chicago in the Giants' first game since the suspension of wide receiver Golden Tate was announced Tuesday.

The Giants' defense struggled as Sam Darnold drove the Jets right down the field on the opening possession.

Bears coach Matt Nagy continues to keep quiet on how much the starters will play, but all indications are little or not at all even if they're obviously tired of hitting each other and want to hit someone else.

They went through a two-hour-plus mock game Wednesday night, complete with pumped-in stadium noise, light hitting, a clock and starters facing backups. Kyle Long got into a fight, removed the helmet of rookie defensive lineman Jalen Dalton and began swinging it at defenders before being sent to the bench for the night. It was their third straight practice with a fight of some sort.

Starting tight end Trey Burton returned to play in the simulated game after a week and a half away while recovering from hernia surgery, but left guard Cody Whitehair injured a finger and left the practice. So, seeing any starters after a practice so long and intense would seem unlikely.

Mitchell Trubisky and the starting offense played only three snaps and handed off three times in last week's preseason opener, a 23-13 loss to Carolina.

The kicking competition between Eddy Pineiro and Elliott Fry continues after the Bears reportedly failed in a bid to trade with Baltimore for Kaare Vedvik, who was dealt to Minnesota.

Ryan Fitzpatrick, battling with Rosen for the Dolphins' starting quarterback job, will face the team for which he played the last two seasons.

Fitzpatrick is expected to start, but Rosen may also get some snaps with the first team. First-year coach Brian Flores this week declined to say who is leading the competition.

Flores will likely take another long look at undrafted rookie receiver Preston Williams, who had a breakout performance in the first exhibition game with four catches for 97 yards.

Also expected to see significant action are rookie guards Michael Deiter and Shaq Calhoun, both competing for starting jobs, and rookie defensive ends Jonathan Ledbetter and Dewayne Hendrix, who both won praise for their play in the first game.

They probably won't play as much as they might normally in a second preseason game because the Bucs and Dolphins held a pair of joint practices this week.

"With as much (practice against Miami) as our 1s are getting ... I don't think it's necessary probably to play them much in the ballgame, maybe a few more plays than last week," coach Bruce Arians said. "If things go as well as they did early offensively, it'll probably be the same. Defensively, the same, just because of the work we're getting this week. If we weren't working together this week, we'd probably play 20 or 25 plays."