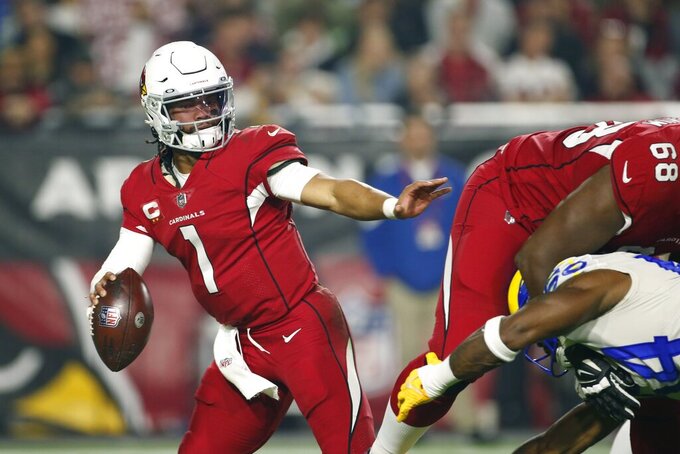 BETTING LINE: Cardinals by 12 1/2, according to FanDuel SportsBook.

TURNOVER DIFFERENTIAL: Cardinals plus-10; Lions minus-4.

LIONS PLAYER TO WATCH: WR Amon-Ra St. Brown. The rookie had a team-high eight receptions for 73 yards against Denver last week. In the previous game, he had career highs with 10 catches for 86 yards and made the winning TD reception for his first score in the last-play victory over Minnesota.

KEY MATCHUP: QB Kyler Murray against Detroit's defense. Murray threw for 383 yards, ran for a season-high 61 yards and had a career-high 444 yards of offense against the Rams. He did not throw a touchdown and did have two interceptions in the setback. The Lions will boost their slim chances at pulling off an upset if they can force Murray to turn it over often.

KEY INJURIES: Hopkins was hurt in the fourth quarter against the Rams. RB James Conner (ankle) had an MRI and coach Kliff Kingsbury said his status is day to day. Kingsbury hopes RB Chase Edmonds (ankle) and OL Justin Pugh (calf) will be play in Detroit after both missed multiple games. ... Detroit was without its top RBs D’Andre Swift (shoulder) and Jamaal Williams (COVID-19 reserve list) along with standout TE T.J. Hockenson (hand) against Denver. Hockenson had season-ending thumb surgery Thursday, according to a person familiar with the situation who spoke on condition of anonymity because the team had not made an announcement regarding Hockenson. Williams was one of five players on the COVID-19 reserve list on Wednesday, when C Evan Brown was removed from the list. The next day, S Jalen Elliott gave the team six players on the list. S Alex Anzalone (ankle) and CB Jerry Jacobs (knee) were injured against the Broncos.

SERIES NOTES: The Lions are 3-0-1 against the Cardinals since losing to them in 2015. ... Detroit has won 55.7% of games against Arizona, its third-highest winning percentage among teams with more than 15 all-time matchups.

STATS AND STUFF: Arizona is a win away from earning a spot in the playoffs for the first time in six years. ... The Cardinals are a game ahead of the Rams in the NFC West and are tied with Green Bay and Tampa Bay for the conference's best record. ... Arizona dropped from No. 1 to 5 in the AP Pro32 and Detroit remained at No. 30, staying ahead of Houston and Jacksonville. ... If the Cardinals win, they will be the 10th team to have eight road victories in a season with a chance on Jan. 2 at Dallas to be the NFL’s first team with a 9-0 road record in a season. The league is playing a 17-game schedule for the first time this season... If Arizona beats Detroit by double digits, it will be the league's first team to win eight road games in a row by 10-plus points since Chicago had nine consecutive victories by double digits as visitors during the 1941 and 1942 seasons. ... Conner scored for a team-record seventh straight game with two TDs against the Rams. He also had a career-high nine catches and a season-high 94 yards receiving, but was held to a season-low 2.38 yards rushing on 13 carries. ... Detroit has double digits in losses for the fourth straight year and will have 11 or more setbacks for the third year in a row. ... The lopsided loss in Denver ended a four-game stretch in which the Lions won for the first time, tied once and lost twice by a total of five points. ... QB Jared Goff threw five TDs and only one INT in his last two home games. ... St. Brown and Philadelphia's DeVonta Smith are the two NFC rookie WRs with 50-plus receptions and 500-plus yards receiving. ... Third-year LB Josh Woods had a career-high 13 tackles at Denver.

FANTASY TIP: Green is worth a start. He has a pair of 100-yard receiving games in a season for the first time since 2018 and will have an increased role in the offense against a banged-up secondary.