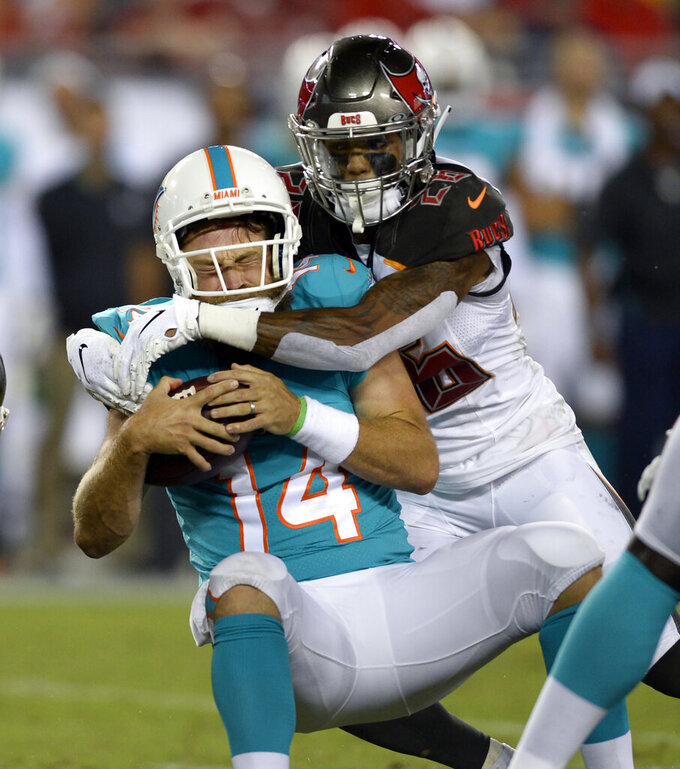 The long-time coach is back on the sideline following a year of retirement, tasked with helping Jameis Winston prove he's a franchise quarterback, and ending the second-longest postseason drought in the NFL.

The Bucs haven't made the playoffs since 2007. That's a 12-year stretch of futility that's claimed the jobs of five coaches.

It doesn't bother Arians that few prognosticators envision things winding up any differently under his leadership, especially with Winston — a talented, but wildly inconsistent passer — running the offense.

On the first day of training camp he repeated what's become a familiar chorus in the locker room.

"Don't listen to the noise. Go to work every day," said Arians, who coached for the Arizona Cardinals for five years before retiring after the 2017 season.

Nevertheless, Arians feels he inherited a team that wasn't that far from turning the corner under former coach Dirk Koetter, who was fired after winning 19 games in three seasons.

"I go back to my first year in Arizona, it was five, mostly six (predicted wins). We won 10, and we had injuries, but we won games in the last two minutes," Arians said.

"When you go back and look at (last year's) 5-11 record, there were a lot of close games. We didn't play smart enough to win, or we missed a kick, or we had a penalty or busted assignment. It was Bucs beating Bucs," the coach added. "It wasn't talent. It's just play better in the final two minutes of the half and the final two minutes of the game, and they're at least 8-8."

Arians said the opportunity to work with a quarterback with skills and potential of Winston was "a big part" of the decision to come out of retirement.

The prevailing belief is if Arians can't fix Winston, who'll earn nearly $21 million in the final year of the rookie contract he signed as the No. 1 overall pick in the 2015 draft, then no one will be able to do it.

Winston has appeared in a Pro Bowl and is less than 200 yards shy of becoming the franchise's career passing leader, yet there as still serious questions about whether he's the club's long-term solution at quarterback. He's only produced one winning season (9-7 in 2016) and is coming off a year when he missed three games while serving a suspension for violating the league's personal conduct policy. The biggest knock on the fifth-year pro has been his decision making with the football. He has thrown for 14,628 and 88 touchdowns, but also has 58 interceptions in 56 career games.

To give Winston a chance to be successful, the Bucs have assembled some impressive playmakers on offense. Receivers Mike Evans and Chris Godwin, as well as tight ends O.J. Howard and Cameron Brate, all figure to get plenty of opportunities to contribute. Arians also calls running back Ronald Jones II, coming off a disappointing rookie season, an explosive player who can make a difference in the rushing and passing attacks.

"Just like Jameis, and all these young players, we're trying to get these guys to make the right decisions because the National Football League is not really about talent," offensive coordinator Byron Leftwich said. "You win with technique, and that's hard to get young guys to understand."

Six-time Pro Bowl DT Gerald McCoy is out and Ndamukong Suh is in as part of an overhauled defense. Former New York Jets coach Todd Bowles is calling the shots as defensive coordinator and rookie ILB Devin White was asked to lead the unit from Day 1.

"I couldn't have asked for anymore. He knows what he's doing," Arians said of White, the fifth overall pick in the draft. "He's playing fast, he's playing physical. He's running the whole show."

LB Jason Pierre-Paul, coming off a season when he became the first Tampa Bay pass rusher to make double-digit sacks since Simeon Rice in 2005, missed all of training camp after suffering a neck injury in an offseason car crash. The Bucs hope he can return as early as October. In the meantime, Arians isn't concerned about being able to fit into Bowles' 3-4 scheme.

"No, because he knows how to rush the passer, and that's what he's going to do," the coach said. "He'll know where to line up."