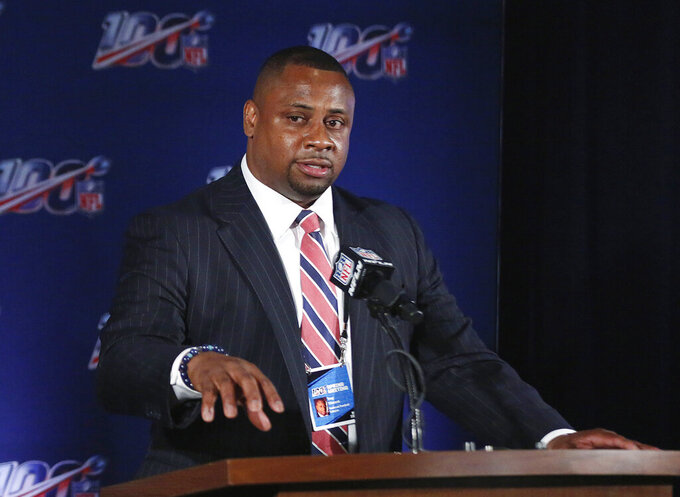 FILE - In this May 22, 2019, file photo, NFL vice president Troy Vincent speaks to the media during an owners meetings in Key Biscayne, Fla. When the Rooney Rule was adopted by the NFL in 2003, Vincent was in his 12th of 15 seasons as an outstanding defensive back. He was soon to become the president of the NFL Players Association, an impactful position he held for four years. He joined the league office in 2010 as vice president of player engagement, and by 2014 Vincent was in charge of NFL football operations. Vincent, who is Black, had made great strides in the sport. (AP Photo/Brynn Anderson, File)

When the Rooney Rule was adopted by the NFL in 2003, Troy Vincent was in his 12th of 15 seasons as an outstanding defensive back. He was soon to become the president of the NFL Players Association, an impactful position he held for four years.

He joined the league office in 2010 as vice president of player engagement, and by 2014 Vincent was in charge of NFL football operations. Vincent, who is Black, had made great strides in the sport.

Yet he knows the Rooney Rule, designed to advance opportunities for minorities in such areas as coaching and front office positions, hasn't been having the desired effect. Earlier this month, the NFL implemented a seven-point mobility plan that it projects will enhance such chances and lead to more diversity throughout a league in which about 70% of the players are minorities.

“We had to examine all we do and have done, and obviously things had not been working, so it took a complete reform,” Vincent told The Associated Press. "The resolution adopted is just a complement to what we have done in the expansion of the Rooney Rule through the years, and the media policy and the anti-tampering policy. It complements those other points of league and club education, and having diversity and equity-inclusion plans. It complements the identification of talent, the developing of talent, and networking of talent. Universal data collection and the reporting and measuring of the metrics.

“Now let’s see how we measure at the end.”

The end game is a long way off, of course. But even incremental steps are significant when considering there are only two general managers of color in the league. Of the 30 full-time coaches, only four are minorities; both the interim coaches in Houston (Romeo Crennel) and Atlanta (Raheem Morris) are Black.

The recent resolution calls for draft picks as a reward to organizations for developing minority coaches and front office executives who become head coaches, general managers or team presidents for other clubs.

The seven-point mobility plan focuses directly on explaining the responsibilities of the 32 clubs; the flow of information and who has access to it; developmental programs such as fellowships ( the Bill Walsh Diversity Coaching Fellowship and the Nunn-Wooten Scouting Fellowship Program have had a solid effect on hirings); accountability; making coaches more available to media to increase their profiles; and establishing a pathway for progress.

"Hopefully new opportunities and additional upward mobility will be created for coaches and personnel across the league. There’s still much work to do, but this resolution is another step in the right direction,” he said.

Vincent makes note of the dozens of people who have pushed for diversity in the 17 years since the Rooney Rule was adopted. From Paul Tagliabue, then the NFL's commissioner, and Steelers owner Dan Rooney, for whom the rule is named, to other team owners such as Atlanta's Arthur Blank, Philadelphia's Jeffrey Lurie, Denver's Pat Bowlen, the Rams' Stan Kroenke, and such Hall of Fame members as Paul Brown, Wellington Mara, Al Davis and Lamar Hunt who were open to diversity throughout their tenures.

He praises folks behind the scenes: league counsel Jeff Pash; attorney Cyrus Mehri, one of the developers of the Rooney Rule; Fritz Pollard Alliance executive director Rod Graves; team executives past and present such as Newsome, Bill Polian, Rich McKay, Katie Blackburn and Amy Trask; Black coaches Tyrone Willingham, David Shaw and Denny Green, whom Vincent calls, along with Walsh, “pillars” in the fight for opportunity.

“You can see the efforts have been a long, long time coming and a lot of people have been involved,” Vincent said. “When you look at where we started and some of the numbers and where we are today — we have work to do.”

He's hopeful the hiring process, particularly at the end of the season, will be slowed down, something Hall of Famer Tony Dungy and many others have pointed to as a major drawback in diversity hiring.

“I believe that is an accurate point,” Vincent said. "With the expansion of the Rooney Rule, you tie that back to the anti-tampering policy that now requires the clubs to give us organizational structure and the role and responsibilities of the job. You tie that back to expanding the requirements on the number of (minority) applicants that have to be interviewed — head coach is two and we believe clubs will exceed that.

“The coordinator job now is on the table, and it wasn’t for someone of color or a minority in the past. We are literally organically slowing down the process; there are more requirements to be met, so it slows down the process.

“Eventually the hope is we don't have to put these things in place. That we as a people and organization and a league can move beyond legislation and policy changes and just really stand on doing the right thing for the right reasons. It may not happen in my lifetime, but that is the ultimate goal. Until that happens, it is necessary to have in place what has been done.”