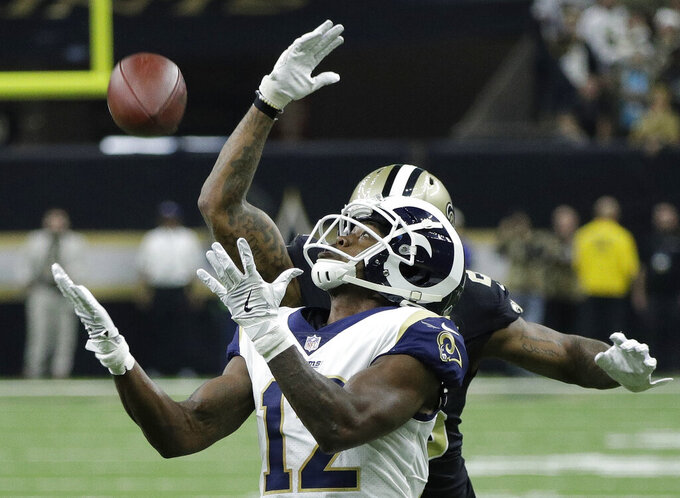 AFC vs. NFC in Pro Bowl, 3 p.m. EST. The NFL's all-star game will be played in Orlando, Florida, with Patrick Mahomes, Drew Brees, Todd Gurley and J.J. Watt all among those voted as starters.

New England vs. Los Angeles Rams in Super Bowl, 6:30 p.m. EST. Tom Brady and the Patriots (13-5) head to Atlanta to play for the Lombardi Trophy for the third straight season and fourth time in five years. Jared Goff and the Rams (15-3) will be appearing in the franchise's first Super Bowl since the 2001 season, when the "Greatest Show on Turf" was still in St. Louis.

— Tom Brady, Patriots, threw for 348 yards and a touchdown and led New England on the winning drive in overtime to send the franchise to its third straight Super Bowl appearance with a 37-31 victory over the Kansas City Chiefs.

— Greg Zuerlein, Rams, kicked a 57-yard field goal in overtime for a 26-23 victory over New Orleans in the NFC championship game.

— Ndamukong Suh and Dante Fowler Jr., Rams. Suh had 1½ sacks and Fowler had a half-sack and also hit Drew Brees' arm to cause an interception that sent Los Angeles to a 26-23 overtime win over New Orleans.

New England (13-5) advanced to the Super Bowl for the third straight year with a 37-31 overtime victory at Kansas City. Awaiting them in Atlanta will be the Los Angeles Rams, who won 26-23 in overtime in New Orleans for the NFC championship. The Rams (15-3) last made the Super Bowl in 2002 while based in St. Louis, losing to the Patriots. It will be 17 years to the day since New England won that game 20-17.

Both AFC and NFC championship games went to overtime for the first time. The only AFC conference title game that previously went to OT in the Super Bowl era was in the 1986 season, when Denver beat Cleveland 23-20. ... New England edged Kansas City 37-31 in overtime in the AFC championship game after the teams met in Week 6, when the Patriots beat the Chiefs 43-40 in a game featuring 946 yards. This one had 814. ... New England has played in eight straight AFC title games, but this is its first road playoff win since the 2006 season vs. San Diego. ... Kansas City's defense tied for first in the NFL with 52 sacks, but had none Sunday. New England had four. ... New Orleans' 26-23 overtime loss to the Los Angeles Rams was the first home playoff loss for the Saints with quarterback Drew Brees and coach Sean Payton, who had been 6-0 in those games since their pairing began in 2006.

Saints coach Sean Payton said the NFL told him officials botched a crucial pass interference call late in the fourth quarter of the NFC championship game in which New Orleans was eliminated by the Los Angeles Rams 26-23 in overtime.

The Saints faced third-and-10 from the Rams 13 in the final two minutes when Los Angeles defensive back Nickell Robey-Coleman slammed into Tommylee Lewis, connecting helmet-to-helmet, while Drew Brees' pass was still in the air. Payton and the Saints were livid when no flag was thrown. The missed call started a sequence that pushed the game to overtime.

Payton says officials on the field told him Robey-Coleman "arrived at the same time that the ball did." Payton got on the phone with the league to discuss the call immediately after the game.

Kansas City coach Andy Reid's decision to defer after winning the opening coin toss proved unwise as New England had 22 plays in the opening period, and Kansas City had seven. Then, the Chiefs lost the more important toss before overtime. Less than five minutes later, they were headed to the offseason with a 37-31 loss.

Saints 40-year-old quarterback Drew Brees made it clear after New Orleans' 26-23 loss to Los Angeles that he has no thoughts of retiring.

"I plan on being here next year and making another run at it," said Brees, who was denied a shot at adding to the Super Bowl title he won during the 2009 season.

"There's just too much at stake, and listen, it's a hard job for those guys. It's happening fast. But I don't know if there was ever a more obvious pass interference. — New Orleans coach Sean Payton after NFL executives he spoke with by phone after a 26-23 overtime loss to the Los Angeles Rams agreed with him that officials on the field missed two obvious penalties on one late, game-turning play that might have prevented the Saints from advancing to the Super Bowl.

"Overtime, on the road against a great team. They had no quit. Neither did we. We played our best football at the end. I don't know, man, I'm tired. That was a hell of a game." — Patriots quarterback Tom Brady after New England advanced to the Super Bowl with a 37-31 overtime victory at Kansas City.