No resolution to Watson dilemma as he stays on Texans roster 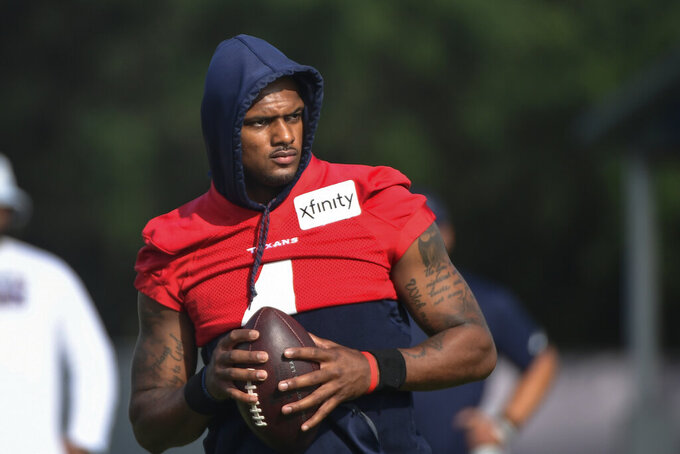 FILE- In an Aug. 2, 2021 file photo, Texans quarterback Deshaun Watson practices with the team during NFL football practice in Houston. Attorneys involved in the lawsuits accusing Watson of sexual assault and harassment say the FBI has become involved in the case. Tony Buzbee, the attorney for the 22 women who have sued Watson, said Wednesday, Aug. 18, 2021 he and some of his clients have spoken with FBI agents about the allegations against Watson.(AP Photo/Justin Rex_file)

HOUSTON (AP) — Quarterback Deshaun Watson remained on the active roster Tuesday as the Houston Texans made cuts to reduce their roster to 53 players.

Watson’s future with the team is in question after 22 women filed lawsuits alleging that he sexually assaulted or harassed them.

Houston police and the NFL are investigating the allegations. Even before the accusations against Watson, he had been unhappy with the direction of the team and requested a trade earlier this year.

Watson, who led the NFL in passing yards last season, reported to camp to avoid being fined and participated in individual drills but never practiced with the team, watching as Tyrod Taylor ran the offense.

“I’ve said from Day 1 that Deshaun is a part of this team and we’ll continue to handle business accordingly," Taylor said when asked about his thoughts on Watson remaining on the roster.

The Texans haven’t named Taylor the starter, but he started each preseason game and his repetitions in practice made it clear that he would be the one to replace Watson.

“My mindset hasn't changed since I started playing football,” Taylor said. “Prepare like a starter, lead like a starter and let the coaches make decisions.”