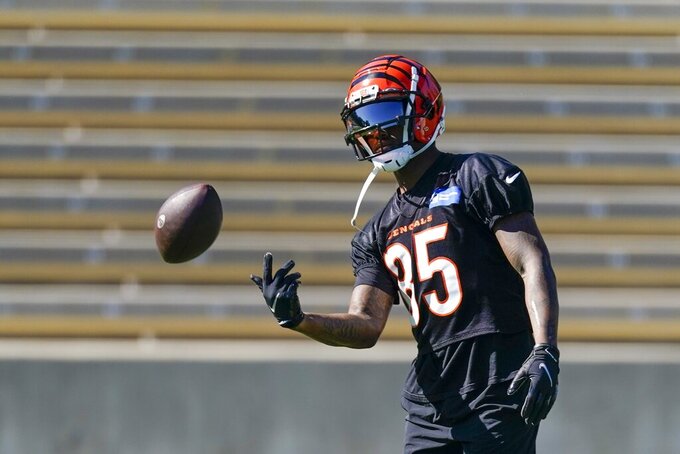 LOS ANGELES (AP) — Ja'Marr Chase gets most of the attention at receiver for Cincinnati with his big-play ability opening up the offense and helping the Bengals reach the Super Bowl.

The addition of Chase this season wouldn't have been nearly as consequential for the Bengals if not for the standout play from the two returning receivers in Cincinnati.

With Tee Higgins providing the big-bodied outside receiver who thrives on winning contested catches and Tyler Boyd excelling in the middle of the field out of the slot, quarterback Joe Burrow almost always has an open target.

“There’s no way that teams can come out there and double all of us and there’s no way to take away one guy and the rest of us is not going to make plays,” Boyd said. “I think we just do a good job of feeding off each other once we see one another make a play, then we’re going to be the next guy to do that and keep the ball rolling.”

Completing a receiver group that already had playmakers in Higgins and Boyd was exactly why the Bengals made the difficult decision in April to draft Chase instead of upgrading the offensive line with a player like Penei Sewell.

The Bengals have a similar dynamic with what Higgins calls the “best trio in the game.”

“For the most part, we’re a three wide receiver offense,” Callahan said. “If you have three receivers that people have to cover, it’s going to be harder for them. Our biggest philosophy is you want guys that can score touchdowns because you got to score points to win in today’s NFL. The quarterbacks have to have a target to throw to, guys that can win and separate on all levels of the defense. We got three guys that can do that.”

While Chase's exploits are well known after he was named the top offensive rookie in the league after setting a rookie record with 1,455 yards receiving and a league-leading seven receptions of at least 50 yards in the regular season and playoffs, Boyd and Higgins are nearly as important.

Higgins is second in the NFL with five 100-yard games since the start of Week 12 and his 854 yards in that span trail only Chase and the Rams' Cooper Kupp.

Higgins had 194 yards and two TDs in a key late-season win over Baltimore and a team-high 103 yards in the AFC title game when the Chiefs keyed their coverage on Chase.

“It definitely helps. The guy’s been playing outstanding, Offensive Rookie of the Year,” Higgins said of Chase. “So of course, he should get a lot of attention. And once he does, that's when TB and I do what we have to do.”

Boyd has been one of the most productive receivers out of the slot this season with his 808 yards receiving from the slot in the regular season and playoffs ranking third best in the NFL, according to Pro Football Focus.

Boyd also had the most targets this season without a dropped pass with 99 and leads the Bengals with 21 conversions on third down as Burrow's most trusted target in key situations.

“Me maneuvering in the slot determines a lot of his hot reads and it allows him to get rid of the football quickly,” Boyd said. “The good thing about that is I understand a lot of what defenses are trying to do to us. I understand coverages and things like that and just preparation.”

The three all say their closeness off the field plays a big role in their success on it with the receivers spending lots of time away from the facility eating meals and hanging out.

Those relationships mean that none of them ever get frustrated if one of the others is producing the big numbers.

“We wish the best for each other,” Higgins said. “If one guy goes off, nobody’s mad. We just just wish the best. We’re hoping somebody goes off.”