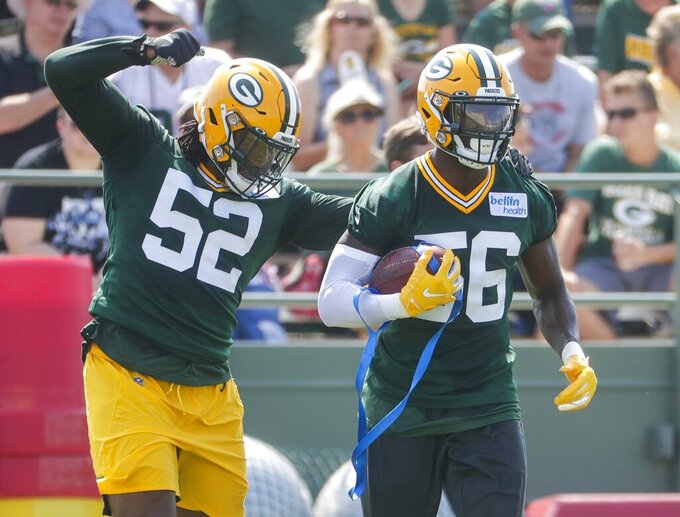 GREEN BAY, Wis. (AP) — Rashan Gary is his own worst critic. Nobody is harder on him than himself.

But the rookie outside linebacker is trying to not allow that to get the best of him as he figures his way in Packers defensive coordinator Mike Pettine's defense.

"I'm just trying to understand that if I mess up in practice, I still have a couple more team periods to erase it," Gary said on Friday after Green Bay's second practice of training camp. "But I'm always hard on myself. I'm the hardest person when it comes to breaking down my own film. But it's a learning process. I know I'm at the point where I'm able to do certain things I know I need to do. I know I can execute."

Gary's locker is nestled between outside linebackers Preston Smith and Za'Darius Smith. Gary said he's just trying to soak up as much knowledge as he can from the two veterans.

"Those two guys are just molding me," Gary said. "Everything they're doing, I'm following in their footsteps."

Green Bay acquired the two Smiths in March to bolster its pass-rush personnel. The Packers drafted Gary the following month with the 12th overall pick to do the same.

With the release of former Pro Bowl defensive tackle Mike Daniels earlier this week, Gary could be asked to do more. The two-time first-team All-Big Ten performer at Michigan said that's not a problem.

"If coach wants me to play the 3 (technique), then I'm going to go rush at the 3," he said. "If you want me to stay outside, keep rushing outside, that's what I'm about to do. Day by day, I've just been working on perfecting my craft and becoming the best I can for this team."

Gary's listed as an outside linebacker but played both defensive end and defensive tackle while at Michigan. When asked what position he prefers, Gary kept it simple: "I'm an athlete. I don't know how else to put it. I feel like whatever the coach wants me to do, I could do it."

Preston Smith, a fifth-year veteran who played his first four seasons in Washington, said he's never seen a player at Gary's height and weight that also has his athleticism. The 6-foot-5, 277-pound Gary ran a 4.58 40-yard dash at the NFL combine, the fastest by any defensive lineman in this year's event.

"He's a good kid," Preston said. "He has his head on right. He's always willing to come in and learn. He loves to compete. He always wants to get better. ... Being a young kid, I just try to tell him, 'Man, don't let it get to your head,' because sometimes he thinks he's not doing as good as he knows he can.

"I have to tell him, 'You're still doing good, man. Just watch the film and improve on it and try to polish up certain areas of your game.'"

The priority for Gary is just to learn. Learn as much as he can as quickly as he can. Gary said he has already picked up from Aaron Rodgers that he's tipping some of his coverages. Gary said he's talked with Rodgers about how to better disguise his plans on the field.

Gary and the Packers' first preseason test will come Aug. 8 at Lambeau Field against the Texans. The two teams will hold joint practices Aug. 5-6 in Green Bay. Gary said he will be keeping a close eye on three-time NFL Defensive Player of the Year J.J. Watt.

"When it comes to people that are taking over the game — from rushing the passer to setting the edge and playing the run — having a guy like J.J. Watt come down, a guy I look at and watch his film, I can't wait to watch him. It's going to be a good thing. But I'm going to watch from a distance and make sure I take my notes on him."