Packers attempt to contain Henry as Titans head to Lambeau 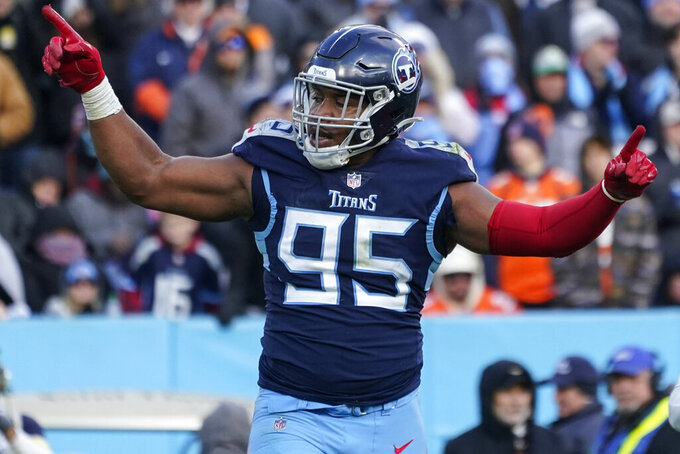 TURNOVER DIFFERENTIAL: Titans plus-3; Packers minus-5

TITANS PLAYER TO WATCH: QB Ryan Tannehill. With defenses focused on stopping two-time NFL rushing champ Derrick Henry first and foremost, Tannehill has to make them pay. He rebounded from missing two games with a sprained right ankle to throw for 255 yards and two TDs. He has eight TD passes with only three interceptions. Better yet, Tennessee’s patchwork offensive line allowed him to be sacked only once last week.

PACKERS PLAYER TO WATCH: WR Christian Watson. The second-round pick from North Dakota State was struggling with injuries and inconsistency for much of his rookie season before catching four passes for 107 yards and three touchdowns against the Cowboys. His continued emergence would give QB Aaron Rodgers the downfield threat the four-time MVP has been lacking for most of the season.

KEY MATCHUP: Henry vs. Packers run defense. Henry is coming off his second-worst game of the season after Denver held him to 53 yards on 19 carries, snapping his streak of five straight 100-yard rushing performances that had pushed him to the top of the NFL in rushing. He has a chance to bounce back against a Green Bay defense that is allowing 4.8 yards per carry.

KEY INJURIES: Titans C Ben Jones is out after not clearing concussion protocol along with K Randy Bullock (right calf). The Titans signed K Josh Lambo to the practice squad on Tuesday, then to the active roster Wednesday. ... Titans DL Jeffery Simmons, a 2021 Pro Bowler, is among 11 Titans from the defense on the injury report with OLB Bud Dupree (hip) and S Amani Hooker ruled out. Simmons didn’t play against the Broncos because of an ankle injury. ... The Packers will play a second straight game without OLB Rashan Gary (knee) and CB Eric Stokes (ankle/knee), who are on injured reserve. ... Packers WR Romeo Doubs (ankle) also is out for a second straight game. ... Packers LB De’Vondre Campbell (knee) will miss a third straight game. ... Packers OT David Bakhtiari (knee) and OG Elgton Jenkins (knee) are questionable.

SERIES NOTES: This is only the second time Titans coach Mike Vrabel has faced off against his former offensive coordinator Matt LaFleur, who was Tennessee’s offensive coordinator in 2018 before being hired as the Packers head coach. LaFleur is 1-0 against Vrabel. The Titans are 3-0 in Tennessee against the Packers and 4-3 at Lambeau Field, but have lost their past two visits by a combined score of 95-21. The winning team has scored at least 40 points in four of the past five Titans-Packers matchups. When Green Bay and Tennessee previously met, Aaron Rodgers threw four touchdown passes and A.J. Dillon ran for a career-high 124 yards and two more scores as the Packers romped at a snowy Lambeau Field.

STATS AND STUFF: The Titans are 14-5 against the NFC since 2018 when Mike Vrabel was hired as head coach. That .737 interconference winning percentage is tied for third in the NFL in that span. ... The Titans have won six of their past seven. ... The Titans are 9-2 in games on short rest during Vrabel’s tenure. ... The Titans have an NFL-best 16 sacks over the past four games. ... Tennessee has used 24 defensive starters this season. ... The Titans are holding opponents to 27.9% conversions on third down to lead the league in that category. ... The Titans have three or more sacks in six straight games, the franchise’s longest streak since 1979 as the then-Houston Oilers. It’s also the longest active stretch in the NFL. ... Tannehill has 37 total wins, including playoffs. That’s the most by any quarterback in his first four seasons in franchise history. ... Titans WR Nick Westbrook-Ikhine had a career-high 119 yards receiving and two TDs against the Broncos. ... The Titans have limited their opponents to 10 points three times in their past four games and have allowed more than 22 points only once. ... Titans rookie P Ryan Stonehouse leads the NFL with a 53.2 punting average. ... The Titans haven’t scored more than 24 points in a single game this season. ... The Packers are the only NFL team with two overtime wins this season. Denver and Indianapolis are the only other teams to play multiple overtime games. ... The Packers have rushed for at least 200 yards in two of their past three games and three times this season. ... Packers RB Aaron Jones can move into third place on the team's career rushing list with a big game. Jones has 4,901 yards rushing. John Brockington ranks third in Packers history with 5,024 yards rushing. ... Watson’s big performance Sunday made him the first Packers rookie to have at least 100 yards receiving and three touchdown catches in the same game since Hall of Famer James Lofton did it in 1978. ... Packers S Rudy Ford had two interceptions against the Cowboys. Ford had just one interception in his previous 65 games.

FANTASY TIP: Rodgers hasn’t approached the MVP form of his 2020 or 2021 seasons, but he threw three TD passes against the Cowboys and has a legitimate deep threat now with Watson’s emergence. Those fantasy owners who drafted Rodgers, but may have taken him out of their lineups during Green Bay’s five-game skid should feel comfortable starting him again. Watson obviously is worth picking up if his slow start to the season landed him on your league's waiver wire.