Packers dealing with plenty of adversity during busy week 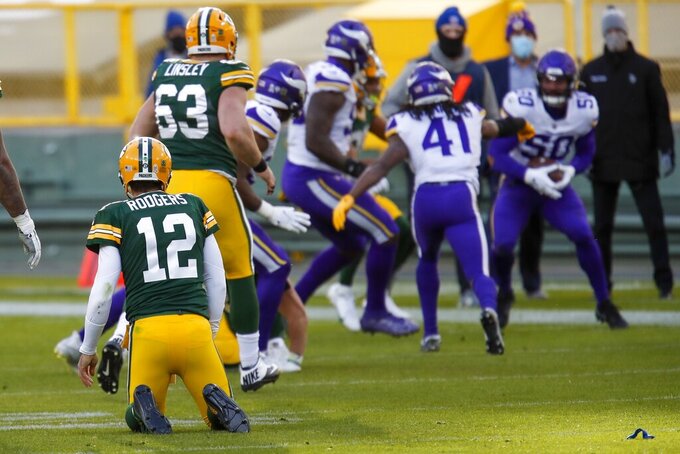 GREEN BAY, Wis. (AP) — This hasn’t been an ideal start to a busy week for the Green Bay Packers.

They lost 28-22 to the Minnesota Vikings on Sunday in a game that revealed how they need to shore up their run defense and get more production from wide receivers other than Davante Adams. Then they had a player test positive for COVID-19 for the first time this season.

All this comes as Green Bay (5-2) prepares to visit the San Francisco 49ers (4-4) on Thursday in a rematch of the NFC championship game that the Packers lost 37-20 last season. Packers coach Matt LaFleur said Monday he’s preparing for the game to go on as scheduled even after the positive test.

“It’s the situation that we’re presented with, and we’re going to make the best of it,” LaFleur said. “It’s not an excuse to go out there and play bad or anything like that. It is what it is, man. You’ve got to adapt and adjust.”

This short week wouldn’t have given the Packers much time to get ready for the 49ers game even without the positive COVID-19 test.

The Packers haven’t announced who tested positive, but they did place rookie running back A.J. Dillon on the COVID-19 reserve list Monday. That list is for players who either test positive for COVID-19 or who have been in close contact with an infected person.

Green Bay has plenty to work on.

The Packers lost to the Vikings by allowing Dalvin Cook to rush for 163 yards, catch two passes for 63 more yards and score four touchdowns.

“We had too many missed tackles,” LaFleur said. “We have to make sure we have 11 hats rolling to the football, playing relentlessly with that intent on every play. If a guy’s tired, we have a lot of confidence in the guys that are on the sideline to go in there and replace one of those guys.”

Adams scored three touchdowns for Green Bay, but no other Packers wideout caught more than one pass.

With Tuesday’s trade deadline approaching, the Packers must decide whether to add firepower on either side of the ball or hope they can shore up their weaknesses by getting healthier.

Wide receiver Allen Lazard and linebacker Christian Kirksey are eligible to come off injured reserve at any time after missing Green Bay’s last four games. Lazard had six catches for 146 yards and a touchdown in a 37-30 victory at New Orleans before a core injury sidelined him. Kirksey’s 27 tackles rank fourth on the team.

The Packers miss the injured Aaron Jones but have continued running the ball pretty effectively without him. Jamaal Williams led the way with 75 yards Sunday as the Packers gained 109 yards on the ground and picked up 4.5 yards per carry. … Green Bay’s running backs and tight ends are doing a nice job of getting involved in the passing game. Williams and tight ends Robert Tonyan and Jace Sternberger combined to catch 14 passes for 152 yards. … The offense overall moved the ball well, as the Packers punted just once all day.

Green Bay must improve its tackling and upgrade a run defense that allowed the Vikings to gain 5.1 yards per carry. … The Packers must cash in on drives better after having four scoreless trips to Vikings territory in the second half.

Pick just about any Packers on defense. They all played a part in allowing Cook to score touchdowns on each of the Vikings’ first four possessions. There were missed tackles all over the field.

4 – The Packers have forced only four turnovers all season and didn’t have any takeaways Sunday. Their four takeaways match Dallas and Las Vegas for the lowest total of any NFL team.

The Packers will decide whether to make a move before Tuesday’s trade deadline as they get ready to visit San Francisco on Thursday.