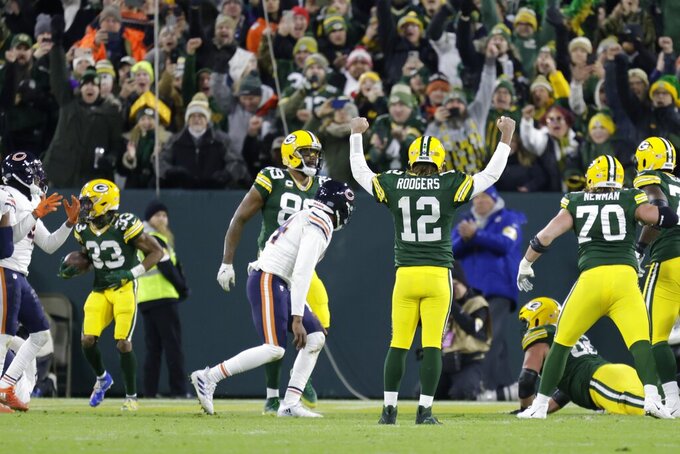 GREEN BAY, Wis. (AP) — Green Bay Packers quarterback Aaron Rodgers, who has been playing well despite barely practicing because of a broken pinky toe, said he’d like to avoid surgery unless “absolutely necessary.”

Coming off a bye week that resulted in some healing and optimism that he could get back on a regular preparation schedule, Rodgers practiced on Friday and threw four touchdown passes in Sunday night’s victory over the Chicago Bears.

Rodgers, however, said he suffered a setback in the game. That seemed to open the door to surgery, a minor procedure that he said wouldn’t cost him playing time.

“It’d be nice to avoid that,” Rodgers said after sitting out Wednesday’s practice. “Can’t avoid a lot of the stuff that happens on gameday, but you can do your best during the week (and) hope for the healing that we need. We’re getting later in the weeks since the initial injury, so it’d be nice to really have some final healing.

"But there’s always going to be potential setbacks when I’m playing on it. If we can have a week where we avoid any major ones, I think we can kind of get past this. But if there’s some major setbacks, then surgery’s always kind of lurking there. It’s just not desirable for myself or any of the people that I’ve consulted with.”

Rodgers broke the toe during his COVID-19 isolation. Since returning to face Seattle on Nov. 14, he’s practiced only twice.

Nonetheless, he has gotten on one of those Rodgers-style rolls that has thrust him back into the MVP race after winning the award last year.

“I’ve always been somebody that enjoys the practice environment and the competition at practice,” Rodgers said. “Because of the situation with my toe, obviously, I’ve had to come up with a different routine that’s worked for me to get me in the right headspace to play well on gameday. When I can get into that rhythm, I’ve had stretches like this before.”

While Rodgers did not practice, left tackle David Bakhtiari started his second comeback from the ACL tear he had on New Year’s Eve.

The two-time All-Pro initially returned to practice on Oct. 20 and was activated from the physically unable to perform list and added to the 53-man roster on Nov. 10. His comeback hit a snag, though, and he wound up having a minor follow-up procedure about three weeks ago.

This was his first practice since Nov. 11.

“That’d be nice to get the Big Giraffe back out there,” Rodgers said. “Obviously, he’s gone through a lot in his rehab and there’s definitely been some low days for him and some contrasting better days. I think he’s in a lot better place now than when he was trying to come back the first time. That’s exciting. He seems to be feeling a lot better with his knee and his recovery.

"Yeah, it’d be great to have him back. He’s an All-Pro player. We’re not going to have maybe first-team All-Pro expectations from snap No. 1, but 80 percent of the Big Giraffe is better than most of the guys in the league. It’d be good to get him back out there for sure.”

Yosh Nijman, the team’s third-string left tackle, figures to start his sixth game of the season in his place.

NOTES: Starting RT Billy Turner suffered a knee injury during the first half against Chicago. Coach Matt LaFleur said the team believes Turner will be able to return this season. Once Turner was out, the Packers were down to only one preferred starter on their offensive line, rookie RG Royce Newman. ... The team held a walk-through on Wednesday. Had the team practiced, Rodgers, Turner, TE Dominique Dafney (ankle) and WR Equanimeous St. Brown (concussion) would not have participated. ... Before practice, the team signed C Michal Menet to the practice squad. He was a seventh-round pick by Arizona in this year’s draft.