Packers' Watson eager to flip script on his rookie season 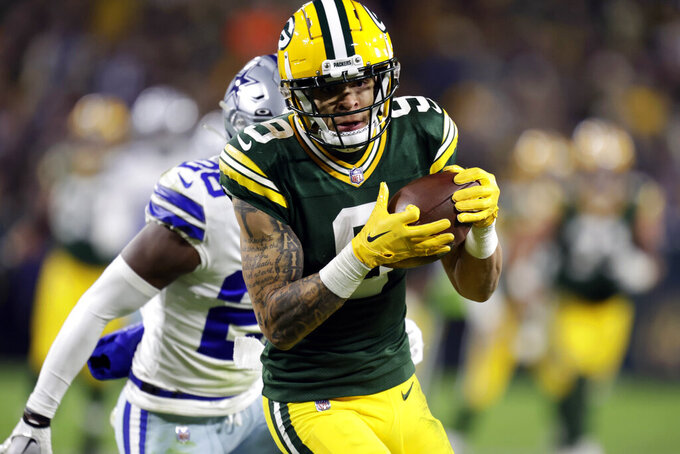 FILE - Green Bay Packers wide receiver Christian Watson (9) catches a pass for a touchdown in front of Green Bay Packers safety Darnell Savage, rear, ,during the second half of an NFL football game Sunday, Nov. 13, 2022, in Green Bay, Wis. Watson had spent most of his rookie season dealing with injuries and struggling to catch the ball before coming up huge Sunday with three touchdown catches in a 31-28 overtime victory over the Cowboys. (AP Photo/Matt Ludtke, File)

Then again, who could blame the second-round draft pick out of North Dakota State for wanting to commemorate his breakthrough performance in style after facing so much adversity?

Watson had his first three career touchdown catches Sunday in the Packers’ 31-28 victory over the Dallas Cowboys. He did the backflip in the end zone after the first one and isn’t saying whether he will make that a one-time thing or a regular part of his touchdown celebrations.

“I guess we’ll find out,” Watson said. “It’s definitely something that I enjoy doing.”

Watson will try to build on the momentum from that performance when Green Bay (4-6) hosts the Tennessee Titans (6-3) on Thursday night. His rookie season hadn’t been particularly enjoyable until Sunday.

The Packers traded the No. 53 and No. 59 overall picks in this year's draft to the Minnesota Vikings for the right to take the 6-foot-4 Watson at No. 34. Now he finally has shown what he’s capable of delivering.

“We need him to stay healthy,” quarterback Aaron Rodgers said after Sunday’s game. “Because when he is, he’s a different type of guy.”

Staying healthy has been an issue.

Watson went through organized team activities but had knee surgery this summer that sidelined him for much of training camp and kept him from playing in the preseason. He missed two regular-season games with a hamstring injury and left a third game early because of a concussion.

When he has been healthy enough to play, his hands have been a problem. On Green Bay’s first offensive snap of the season, Watson dropped what likely would have been a 75-yard touchdown pass in a 23-7 loss at Minnesota. Watson couldn’t hang on to passes on back-to-back plays in the Packers’ opening series Sunday.

He was asked Tuesday whether his confidence ever wavered.

“I’d say here and there, but it’s a quick bounce back,” Watson said. “Obviously, got a lot of guys rallying around me, a lot of guys building that confidence back up in me. It comes down to a lot of self-talk, too, just leaning back on my preparation, leaning back on my work and know that drops are going to happen, bad plays are going to happen. You’ve just got to make the most of the next opportunity.”

“I’ve been down that slope,” Cobb said. “I’ve had the wrong thoughts. (It helps) being able to have some people around you who continue to uplift you and encourage you and be optimistic and know that you’re going to get another opportunity. After he made that first drop in the game, I went up to him and said: ‘He’s coming back to you. He’s coming back to you. Get the next one.’

“That’s just what Watson did."

He’s the first Packers rookie to catch at least three touchdown passes while accumulating at least 100 yards receiving in a single game since Hall of Famer James Lofton in 1978.

Watson’s 58-yard touchdown in the second quarter was the Packers’ longest pass completion of the season. After the Packers fell behind 28-14 in the fourth quarter, Watson had a 39-yard touchdown and a game-tying 7-yard score.

His only touchdown before Sunday was a 15-yard run from scrimmage on Oct. 2 in an overtime victory over the New England Patriots. Now he’s ready for more.

“Keep on chopping,” Watson said. “Obviously, got to stay on that incline, stay on that rise, just keep on building week to week.”

The Titans are well aware of what Watson did against the Cowboys.

“I think he struggled with some drops and stuff like that earlier in the season, but he definitely had a breakout game and I’m sure they’re hoping that that’s going to kind of carry on for the rest of the year,” Tennessee safety Kevin Byard said. “So we have to make sure we be physical with him, make sure he’s not getting those big plays over the top.”

If Watson gets one of those big plays, he just might break out another backflip.

Sunday wasn’t the first time Watson’s teammates had seen him pull that off. Watson also did a backflip in practice a couple of weeks ago.

“It shocked us all because we hadn’t really seen that from him, that side of his personality first and foremost,” Packers coach Matt LaFleur said. “So I knew there was a chance that if he was going to get into the end zone that that was coming, so it didn’t surprise me.”

Offensive coordinator Adam Stenavich was asked if the Packers might tell him to avoid backflips the rest of the season because of his injury history.