Panthers make history, use all 7 picks on defensive players 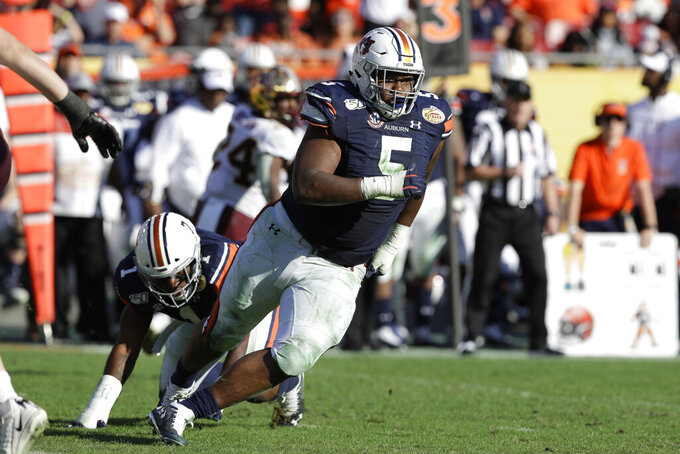 FILE - In this Jan. 1, 2020, file photo, Auburn defensive tackle Derrick Brown (5) runs during the second half of the Outback Bowl NCAA college football game against Minnesota in Tampa, Fla. The Carolina Panthers selected Brown with the seventh pick in the first round of the NFL draft. (AP Photo/Chris O'Meara, File) 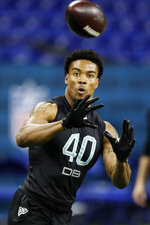 CHARLOTTE, N.C. (AP) — The Carolina Panthers sent a clear message over the weekend: It's time to upgrade the defense.

Rhule knew it would be a defense-heavy draft for the Panthers, but said the team didn't rule out picking offensive players. He said things just happened to fall that way.

“The great thing is we have this young cohort of defensive guys who are going to grow together in (defensive coordinator) Phil Snow’s system over the next couple of years," Rhule said

Rhule did, however, realize what was happening as the NFL's first virtual draft went on, and at one point teased his offensive staff on Zoom, saying, “Are we even paying you guys for today? Are you guys even doing anything?”

Brown figures to be the centerpiece.

The No. 7 overall pick is viewed as three-down player who at 6-foot-5 and 326 pounds is stout enough to take on double-teams up front, which should free up teammates to make tackles.

Brown was one of the most dominant players in the SEC, which had 63 players taken in the draft.

“He is a combination of Richard and Marcus,” Garner said. “He has the athleticism of Seymour but the stature and power of Stroud. So when you put those two together it equates into a pretty special player. ... He imposed his will on pretty much every opponent that we played this year."

Robinson became the first (and perhaps only) XFL player drafted into the NFL when he was selected in the fifth round. After being booted out of West Virginia for violating academic rules, he signed with the XFL's St. Louis BattleHawks, where he had 21 tackles and two interceptions in five games before the league collapsed in the wake of the coronavirus pandemic and ultimately filed for bankruptcy.

Because he still had college eligibility remaining, he qualified for the NFL draft.

“I knew the XFL benefited me in ways like preparing me to be a professional," Robinson said. "I was a professional football player for like six months before anyone else could be.”

Fourth-round pick Pride has a decent chance of starting right away given that the Panthers parted ways with last year’s starting cornerback tandem, James Bradberry and Ross Cockrell.

“You relish that moment to compete against the best because, shoot, the cream is going to rise to the top,” said Pride, the fastest cornerback at the scouting combine this year.

It was no surprise the Panthers drafted a player from Baylor, where Rhule coached last season.

“I knew this was a possibility," Roy said. "He knows what I’m about.”

As for the potential of being paired on the interior defensive line with the mammoth Brown, the 6-1, 332-pound Roy replied, “there’s gonna be some problems for some people, I’ll tell you that right now.”

Gross-Matos’ childhood was marred by family tragedies that he said have shaped his life.

When he was 2 years old, he fell off the side of a boat and his father, Michael Gross, drowned after saving him. He was 29. Nine years later, Gross-Matos’ brother, Chelal, died after being struck by lightning.

“It put the rest of my life in perspective,” Gross-Matos said. “It’s about taking advantage of opportunities every second, every day. Give your best and love the people around you.”

Chinn is the nephew of former Broncos safety Steve Atwater, who was selected to Pro Football Hall of Fame earlier this year.

“He’s definitely been a mentor for me,” Chinn said. “I’ve been able to talk to him about the way life is about to change. From before being an NFL athlete and afterwards and relationships and things like that.”