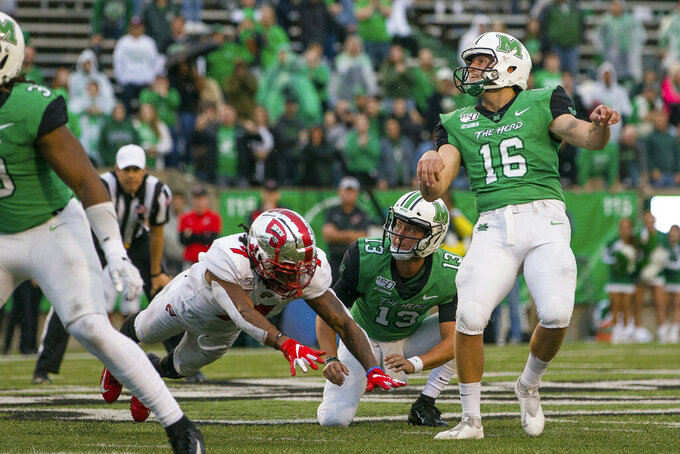 FILE - In this Oct. 26, 2019, file photo, Marshall kicker Justin Rohrwasser (16) hits a 53-yard game winning field goal against Western Kentucky during an NCAA college football game in Huntington, W.Va. New Patriots kicker Justin Rohrwasser says a tattoo on his arm is not representative of a loosely organized right-wing militia group that has adopted the symbol. Rohrwasser, who played at Rhode Island and Marshall, was taken 159th overall in the fifth round of the draft Saturday, April 25, 2020. (Sholten Singer/The Herald-Dispatch via AP, File)

BOSTON (AP) — The Patriots didn’t find a replacement for Tom Brady in the draft, if that was even possible.

But they did address almost every other one of their needs.

New England entered the draft with 12 picks and after making several trades over three days wound up selecting 10 players.

Patriots coach Bill Belichick acknowledged the team made an attempt to add a third quarterback, but it simply didn't work out.

“The bottom line is we’re evaluating the position along with all the other ones," he said. “If we feel like we find the right situation, we certainly draft them. We’ve drafted them in multiple years in multiple points in the draft. It didn’t work out the last three days. It wasn’t by design. It could have, but it didn’t.”

Belichick said the Patriots would address the position via the undrafted free agent market. J'Mar Smith of Louisiana Tech is a possibility.

For now, second-year player Jarrett Stidham and former Brady backup Brian Hoyer remain the only quarterbacks on the roster.

“I like both those players," Belichick said. “I have confidence in both of them.”

The remaining picks were used to target offensive needs, with three used to bolster the line.

The line will get some size with the selection of 340-pound guard Michael Onwenu (Michigan) and guard Justin Herron (Wake Forest) in the sixth round. New England also took Memphis center Dustin Woodard in the seventh round with its final pick.

Woodward has a great shot to make the team. He played in every game during his time at Memphis, including 52 consecutive starts.

David Andrews, who has started 57 games since being drafted in 2015, says he is ready to return after missing last season with blood clots in his lungs. But it’s unclear how durable he will be.

While questions remain at quarterback, the Patriots did identify the man they hope will be Stephen Gostkowski’s successor at kicker.

New England selected Marshall's Justin Rohrwasser in the fifth round (159th overall), just the third kicker drafted during Belichick’s tenure. The last kicker the Patriots drafted was Gostkowski in the fourth round in 2006. He made the 2010s All-Decade team, is a two-time All-Pro and won three Super Bowls with the Patriots. He was released last month.

Rohrwasser is beefy for a kicker at 6-3 and 230 pounds. He also has several tattoos, which include the phrases “Liberty or death” and “Don’t tread on me” as well as an American flag.

But he said another tattoo, a symbol used by the right-wing militia group the Three Percenters, is not meant to represent them. He said he got it as a teenager because he thought it represented military support.

“It’s evolved into something that I do not want to represent,” he said. “It will be covered.”