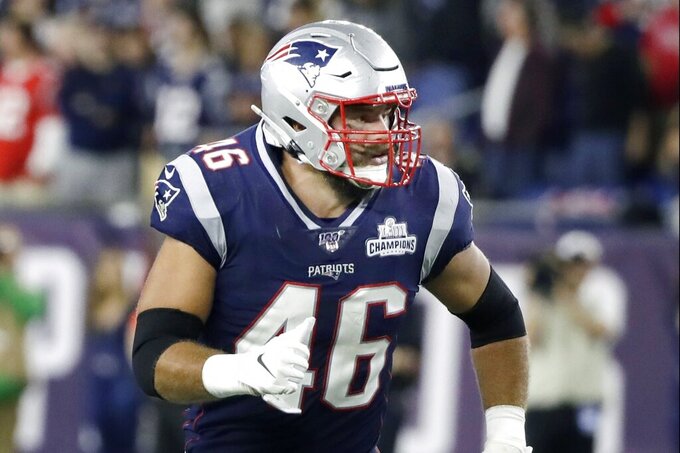 FILE - In this Sept. 8, 2019, file photo, New England Patriots fullback James Develin look for a defender to block in the second half of an NFL football game against the Pittsburgh Steelers in Foxborough, Mass. Develin said in an Instagram message Monday, April 27, 2020, that he is retiring from the NFL because of complications from the neck injury that caused him to miss the final 14 games of the 2019 season. (AP Photo/Elise Amendola, File)

BOSTON (AP) — Patriots fullback James Develin is retiring from the NFL because of complications from the neck injury that caused him to miss the final 14 games of last season.

Develin announced his decision in an Instagram message Monday.

“I have decided it is my and my family's best interest to retire from the game of football,” Develin wrote. “I've always maintained a belief that in the sport, the team is much more important than myself as an individual and that belief still rings true, as I have to prioritize my team at home before anything else.”

Develin played in just two games last season before being placed on injured reserve with the neck issue. He appeared in all 16 games each season from 2013 through 2018.

The 31-year-old has been a staple of both New England’s offense and special teams since joining the team in 2012. He was selected to his only Pro Bowl in 2017 as a fullback. He was a member of three Super Bowl-winning teams.

A Brown graduate, Develin was originally signed by the Bengals as an undrafted free agent in 2011. After being cut the following season, the Patriots signed him to their practice squad. He earned a roster spot and spent most of the next eight seasons with the Patriots doing the kind of dirty work that rarely gets noticed on the field.

Though primarily used as a blocker, over the past few seasons he has filled a hybrid fullback-tight end role. He made a career-high eight starts in 2018 and rushed for a career-best four touchdowns.

“There’s no one person that can do what he does,” Belichick said last season.

Develin was also praised for his selflessness as a teammate during his time in New England. Safety Patrick Chung was one of the first people to reply to Develin's Instagram post.

“You’re a great man, father and husband. Going to miss you on the field,” Chung wrote. “Keep being you and you’ll be successful in anything you do my man.”