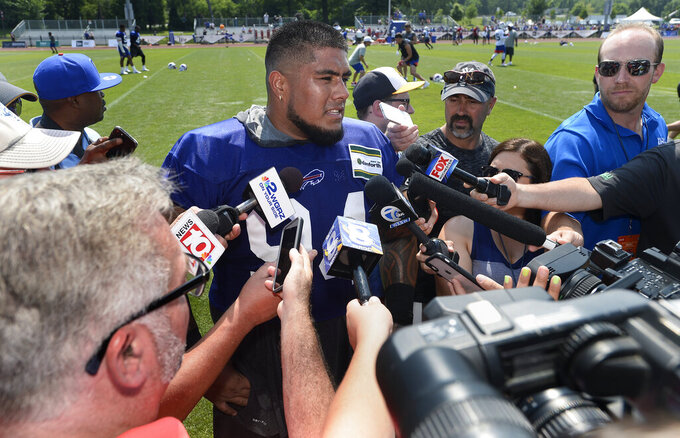 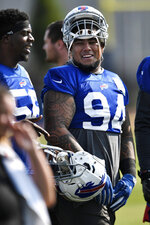 PITTSFORD, N.Y. (AP) — Bills defensive tackle Kyle Peko was torn over whether to report to training camp after his wife, Giuliana, was diagnosed with Stage 3 Hodgkin's lymphoma.

Giuliana made the decision for him.

"It's crazy that I'm here, but it's her. She wouldn't want it any other way," Peko said following practice Friday, a day after he was excused by the team to miss the opening session. "She's the one who told me to get back out there."

The decision to leave his home in California still didn't make it easy on Peko, who revealed his wife's illness in a message posted on his Instagram account while awaiting his flight to Buffalo on Thursday.

"I've just got to be strong for her and my kids," he said. "I have to be the rock here as much as I can while she's back there taking care of business."

The Pekos were informed of the diagnosis about a month ago.

Calling the news devastating, Peko credited his wife for being strong and a fighter. He added she's doing well and remaining positive.

"An Argentinian little fireball," Peko said of his wife, whom he met at junior college in California. They've been married for 4-1/2 years and have two children.

Peko was an undrafted free agent, who spent his first three seasons with the Denver Broncos. He spent most of last season on the Bills' practice squad and was re-signed by Buffalo to a reserve-future contract at the end of the season.

Peko's chances of making the team are uncertain as he's competing for a job with returning backups Jordan Phillips and Harrison Phillips.

Coach Sean McDermott opened his news conference by admiring Peko for reporting to camp and saying they will do everything it can to support the player and his family.

"It puts things in perspective in a hurry," he added. "We're all human and we go through challenges. But the challenge that Kyle and his family are facing are certainly a significant one. I want to let his family know that we are with him all the way."

McDermott, general manager Brandon Beane and team owner Terry Pegula all pulled Peko aside to have a chat Friday.

"They were all about me doing what I have to do and taking care of my family," Peko said. "Super supportive, and I couldn't have asked for anything more."

In his Instagram message, Peko referred to Giuliana as being "the strongest person I know, so what you are BATTLING stands no chance."

Peko then concluded by writing: "As long as I go to NY and kick ass, you'll be here kicking ass. So I hold you to it."

NOTES: TE Jason Croom did not practice after aggravating a hamstring injury he first hurt during spring practices. ... McDermott hasn't yet determined whether the Bills will begin practicing in pads this weekend. ... Spencer Long got his turn at the starting spot at right guard, replacing Jon Feliciano.