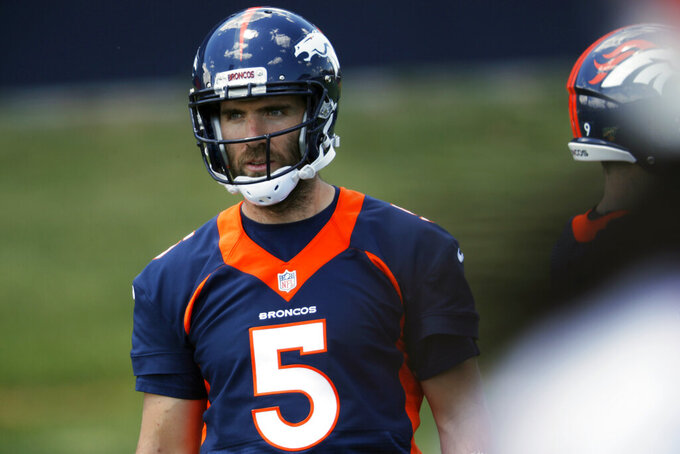 Already, that's being put to the test.

Lindsay participated in individual drills Wednesday at minicamp as his surgically repaired right wrist heals. He also sat out the team drills, which made him antsy.

"I'm itching to be out there," said Lindsay, whose wild hair and relentless rushing style earned him the nickname "Tasmanian Devil" at the University of Colorado. "That's why they have to hold the reins on me so tight."

With a new coach in Vic Fangio and digesting a different system, the second-year undrafted tailback is eager to display what he can do.

Last season, Lindsay rushed for 1,037 yards and nine touchdowns. Only a wrist injury at Oakland on Christmas Eve deprived him of a shot at breaking Dominic Rhodes' 2001 record of 1,104 yards for undrafted rookie running backs. Still, Lindsay earned a Pro Bowl selection even if he couldn't play.

On his list of areas to improve in 2019 — patience. More specifically, waiting for things to develop, especially given the different blocking schemes.

But he could hardly stay still on the sideline with Royce Freeman and Devontae Booker splitting the reps.

Lindsay wanted to be taking handoffs.

"But you can't go out there half-healthy. You're going against these grown men and it's your livelihood," said Lindsay, who attended the Pro Bowl as a social media correspondent. "They want to put me in the best situation to be able to make plays. I want to be able to go the whole entire year, not half a year."

Lindsay believes he will fit in well in this new offense. He can't wait to start developing a bond with quarterback Joe Flacco.

"Flacco's seen me, heard about me, but now he has to trust me," Lindsay said. "I have to go back and earn his trust."

At times, Lindsay ditched his wrist brace for some of the drills. He's balancing being smart about his wrist with the desire to participate in more activities.

Fangio said he expects Lindsay to be full-go for training camp. As for his preference about whether he'd rather have a featured back or use the hot-hand approach, Fangio will take a wait-and-see approach. He likes what he sees from Lindsay even if it's been in a limited capacity.

"He's a very intense competitor, wants to do well and has his priorities in order," Fangio said.

Next month, Lindsay will host a football camp for kids in the Denver area. He will be out there with them and fully engaged.

"That's what I do," said Lindsay, who grew up in Denver. "I'm not going to just sit there."

After all, it's difficult enough to sit out some of the minicamp action.

"Any injury is frustrating. I'm anxious to be out there with my teammates," Lindsay said. "I see Booker and Royce putting in a lot of work and I want to be out there with them. I like the grind. I like being tired. I like sweat, blood, the tears. That's what I'm here for. I can't wait to get back to that."

NOTES: Former Broncos QB Peyton Manning and his father, Archie, stopped by minicamp Wednesday. Fangio maintained that Archie was the best quarterback in the Manning family. "I always said if he was with the Pittsburgh Steelers back when he played, instead of (Terry) Bradshaw — if him and Bradshaw switched spots, Archie would've had all those Super Bowl rings and Bradshaw would've had to go through the agony of playing with the Saints in the '70s." ... Fangio estimated that 90% of the concepts have been installed. ... K Taylor Bertolet took quite a few of the field-goal attempts Wednesday over Brandon McManus. "Brandon is obviously the incumbent," Fangio said. "He (Bertolet) would have to knock him out like in a heavyweight battle."