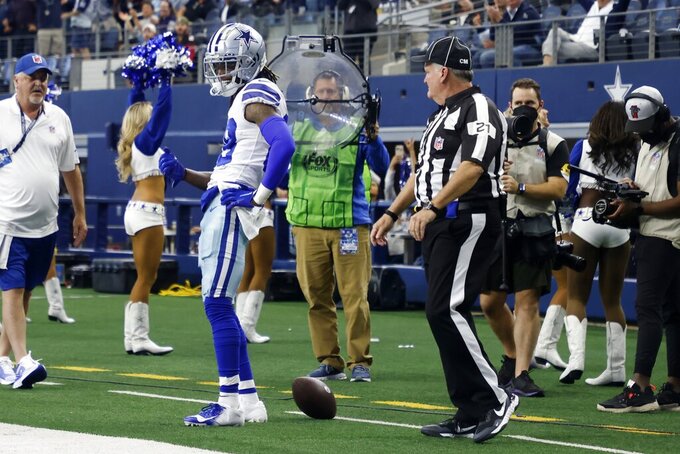 Dallas Cowboys wide receiver CeeDee Lamb, left, performs a dance move after catching a touchdown pass as side judge Jeff Lamberth (21) looks on in the first half of an NFL football game against the Atlanta Falcons in Arlington, Texas, Sunday, Nov. 14, 2021. (AP Photo/Michael Ainsworth)

FRISCO, Texas (AP) — Dak Prescott and the Dallas Cowboys believe they are the team that blew out Atlanta, not the one that was dominated by double-digit underdog Denver when a six-game winning streak ended.

Tied for the fewest losses in the NFC (and the NFL), the Cowboys (7-2) say they learned their lesson and proved it with the 43-3 thrashing of the Falcons.

“We’re not going to get overconfident again,” Prescott said. “That’s what a game like last week does for you. It leaves that taste in your mouth and keeps you humble and makes sure that you stay hungry and that you don’t get too ahead of yourself.”

Dallas doesn't have to worry about any of that this week. Prescott faces Patrick Mahomes for the first time Sunday at two-time defending AFC champion Kansas City in a matchup of division leaders.

The 2018 NFL MVP threw for 406 yards and five touchdowns without an interception to answer doubts about the Chiefs (6-4), who are back atop the AFC West after beating the Las Vegas Raiders 41-14.

The Cowboys answered brief doubts by responding to a poor offensive showing with 219 yards passing and two touchdowns for Prescott before halftime, along with a pair of rushing TDs for Ezekiel Elliott. Dallas' 36-3 halftime lead was its biggest since 1971.

The defense intercepted three passes after going consecutive games without a takeaway following a franchise record-tying 10 straight games with at least two. Atlanta's Matt Ryan had the worst passer rating (21.4) of his 14-year career.

“We’ve got to understand what our journey is and where our competition is,” owner and general manager Jerry Jones said. “We all maybe had overblown what we thought we could be. Well, this team handled that beautifully and I think gave us a lot to go forward with.”

Special teams coach John Fassel's group has blocked punts in consecutive weeks, converting the one against the Falcons into a touchdown. The previous week, Denver got to keep possession because Dallas touched the loose ball beyond the line of scrimmage and the Broncos recovered.

With Greg Zuerlein on the COVID-19 list, 31-year-old kicker Lirim Hajrullahu was perfect in his NFL debut. The former CFL standout went 6 of 6 on touchbacks to keep the ball away from Cordarrelle Patterson and made all five PATs.

Touchdown celebrations. Prescott ended up with a gash on his right cheek because a helmeted CeeDee Lamb head-butted his helmetless quarterback on the sideline after one of Lamb's two receiving TDs.

Prescott completed the scoring against the Falcons by running through linebacker Mykal Walker at the goal line and was asked about the punishment he invited on a play not far from where his gruesome season-ending ankle injury happened last year.

“The hardest hit was CeeDee on the sideline,” Prescott responded. “I’ll be fine.”

Parsons fooled Atlanta RT Kaleb McGary badly by faking outside on a rush and going inside for an easy strip sack of Ryan. At least McGary recovered the fumble. Parsons leads the Cowboys with six sacks and is two from DeMarcus Ware's rookie record of eight in 2005.

LG Connor Williams had three penalties in a span of six Dallas offensive plays in the second half. Two were holding, one declined because it came when Elliott fumbled for the first time this season. The other was a chop block. Williams leads the NFL in penalties (10) and holding calls (eight).

When LT Tyron Smith is ready to return from an ankle injury, Williams' starting job could be in jeopardy. RT La'el Collins has been getting work at guard, and Smith's return could send Terence Steele back to Collins' regular spot. Collins didn't get his job back from Steele when he returned from a five-game suspension.

The questions continue to be about who's coming back rather than who's out. WR Michael Gallup returned from a calf strain that had sidelined since the opener and had a 23-yard catch on fourth-and-3 to set up a touchdown. DT Trysten Hill (2020 torn knee ligament) played for the first time this season. Next up, Lawrence and DT Neville Gallimore. But it might be after the Thanksgiving game for both.

1 — Number of game balls for defensive coordinator Dan Quinn, who was facing Atlanta for the first time since getting fired after an 0-5 start to his sixth season last year. The second of those losses was in the same stadium, a gutting 40-39 defeat in Mike McCarthy's second game as Dallas coach.

“I think I said it on the radio before the game, there wasn’t an individual in football ops that didn’t want to see Dan get a game ball today,” McCarthy said.

The traditional “three games in 12 days” has started for the Cowboys. After visiting the resurgent Chiefs, Dallas plays the Raiders at home on Thanksgiving.