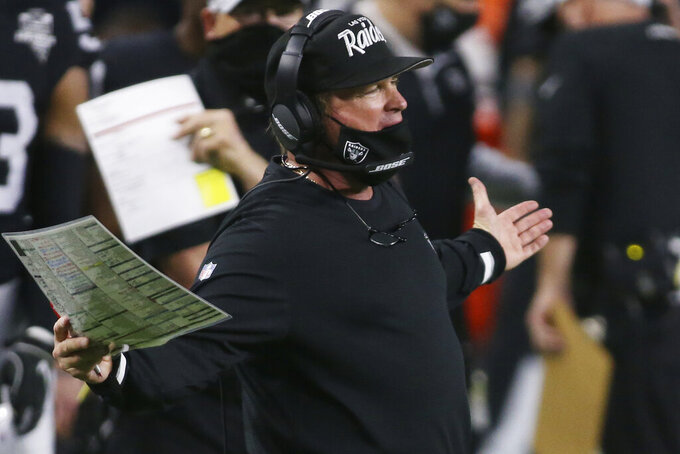 Herbert scored on 1-yard plunge to give the Los Angeles Chargers a 30-27 overtime victory over the Las Vegas Raiders on Thursday night.

“It was pretty crazy,” said Herbert, who set an NFL rookie record with his seventh 300-yard game and has 27 passing scores on the year, tying Baker Mayfield (2018) for the most by a rookie in NFL history. “I kind of waited to see the replay and guys didn’t really know what had happened. So I got up and started shaking hands and kind of saw the game was over.

The Chargers (5-9) snapped a nine-game losing streak against their AFC West counterparts, and snapped a three-game skid against the Raiders. Las Vegas (7-7) lost quarterback Derek Carr to a left groin injury in the first quarter. It has lost four of five, all but killing its playoff chances.

Los Angeles improved to 1-2 in overtime games, while all four of its games against division foes have come down to the final play.

Herbert, who targeted nine receivers and completed at least one pass with seven, was 22 for 32 with 314 yards and two touchdowns.

“I’ve seen a lot of growth over the past couple weeks,” Chargers coach Anthony Lynn said. “He’s doing it with young receivers on the field and spreading the ball around.”

With five receptions for 65 yards and a touchdown, Los Angeles’ Hunter Henry now has a career-high 60 receptions on the year, third-highest among tight ends this season.

The Chargers got revenge from the first meeting on Nov. 8, when Herbert’s apparent TD pass to Donald Parham was overturned by replay to end the game.

For the Raiders, the storyline quickly changed from must-win to stay alive in the playoff hunt, to how to win with backup Marcus Mariota seeing his first action as a Raider, while setting up a showdown of former University of Oregon quarterbacks.

“It was a pretty crazy experience,” Herbert said. “I grew up watching Marcus. He was my favorite player. To see him on the field and play against him was really cool. It’s everything I’ve ever wanted.”

Just four days after firing defensive coordinator Paul Guenther, plus missing four starters on defense, and having their offensive coordinator Greg Olson sidelined after testing positive for COVID-19, the Raiders lost Carr when he came up lame on a third-down scramble near the goal line in the first quarter. Carr immediately went to the locker room and did not return.

Mariota was poised in his return from the first snap.

In his first drive, he was 3 for 3 for 70 yards and a perfectly placed over-the-top pass to Darren Waller. Mariota also scrambled for 11 yards for a first down.

“When it comes down to it, I think it’s part of your job to be prepared,” Mariota said. "Just try to give these guys a chance to win and unfortunately we came up a little short.”

The sixth-year pro finished 17 of 28 for 226 yards with one TD and one interception. He also rushed for 88 yards on nine carries, including a touchdown.

“It just shows the kind of player and football character he has,” Raiders coach Jon Gruden said of Mariota. “You lose Derek, and we change gears offensively. Marcus came in and did a great job. I’m really proud of him. That just puts an exclamation point on why we signed him. Just wish we could have won the game for him.”

Los Angeles placekicker Michael Badgley missed two field goals near the end of the game — one from 47 yards and one from 51 — while the Raiders blew their chance when Mariota made his first bad decision of the game with an ill-advised pass that went off the hands of Zay Jones and into the hands Chris Harris Jr., who returned it 51 yards to give Badgley his second opportunity.

Las Vegas lined up for a 65-yard, game-winning field goal at the end of regulation, but a bad snap was bobbled by AJ Cole, preventing Carlson from making an attempt.