Rams reduced to playoff observers after season of setbacks 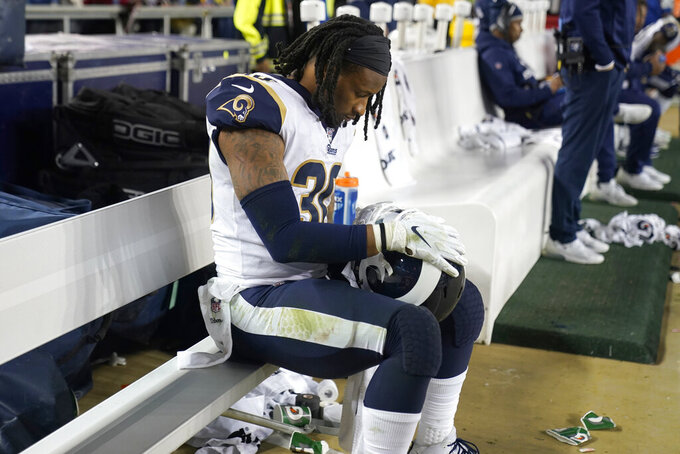 Los Angeles Rams running back Todd Gurley II sits on the bench during the second half of the team's NFL football game against the San Francisco 49ers in Santa Clara, Calif., Saturday, Dec. 21, 2019. (AP Photo/Tony Avelar)

Only five teams in the last 10 years failed to make the playoffs in the season after they reached the Super Bowl.

The Los Angeles Rams (8-7) officially joined that disappointing group Saturday night. Their last-second loss at San Francisco encapsulated so much of what went just wrong enough this season for coach Sean McVay and his star-studded roster.

The Rams were good in 2019, and they could end up as the league's only team with a winning record to miss the playoffs. But a series of setbacks at inopportune times has left them third in the highly competitive NFC West, the only division with two 11-win teams.

Los Angeles is 5-7 since a 3-0 start to this season, stumbling through blowout losses and heartbreakers alike that have left them just outside the postseason picture.

Because so many of their expected difference makers didn't get it done this season, they’re already headed into a long offseason with several huge roster questions And with equally huge financial commitments to navigate while they move into their palatial new stadium in Inglewood.

“You put so much into it, and you want to see more success collectively with the group,” McVay said Sunday. “You get to go through a lot of good and some bad this season. I think that’s forced us to learn a lot about ourselves. I know it has for me personally. Really my focus is on finishing this season out the right way. Once we get to that point where the season is finished, there will be a lot of good self-reflection.”

The Rams finish their four-year tenure in the Coliseum on Sunday by hosting the Arizona Cardinals (5-9-1), but the game was rendered irrelevant by their loss to the Niners.

Again, the Rams were good. They led for nearly the entire first half, their defense held San Francisco to 334 yards, and they made two gritty scoring drives in the second half.

They blew that first-half lead by giving up two touchdowns right before halftime, including an interception returned for a 46-yard score. The defense gave up 60 of its 334 yards in the final 2 ½ minutes on a drive to the Niners’ game-winning field goal.

The defense was more consistent than the offense in Santa Clara, just as it has been all season. But the defense also flopped at a few key points, making glaring errors that led to key scores by the Niners. The two third-and-16 conversions on San Francisco’s final drive will ring the loudest, but the Rams’ season-long ability to limit big plays evaporated down the stretch.

The loss still fresh in his mind, McVay cited “the consistency” as the Rams’ biggest flaw.

The Rams are still ninth in the NFL against the pass, and they leaped up to third in the league with 49 sacks after dropping Jimmy Garoppolo six times. That just makes those third-and-16 mistakes even more painful. But it’s clear the Rams have the ingredients for a stellar pass defense if they can keep most of those players around — which won’t be easy with Dante Fowler, Cory Littleton and Jalen Ramsey among those possibly in line for huge raises.

Todd Gurley and McVay’s rushing game had another dismal evening in Santa Clara. The Rams have the NFL’s 24th-ranked rushing offense (94 yards per game) after managing 78 yards on the ground. Los Angeles was third in the league with 139 yards per game last season, and its yards per attempt is also down from 4.9 to 3.8. The problems are numerous, and McVay must solve them to avoid wasting another year of his wealthy running back's career.

Tight end Tyler Higbee’s late-season emergence as a receiver continued with his fourth consecutive 100-yard performance. That ties the franchise record for 100-yard receiving games in a tight end’s entire career, and Higbee did it all in a row.

It’s difficult for McVay to sugarcoat Jared Goff’s inconsistencies after a game that showcased both his enormous talent and his capacity for game-changing mistakes. Goff went 27 of 46, making pinpoint throws and egregious errors in baffling succession. Goff is tied for 19th in the league in touchdown passes (19), but fourth in interceptions (16).

Rookie running back Darrell Henderson is done for the season due to a high sprain of his right ankle. Ramsey played through pain in a strained knee ligament Saturday, but the Rams haven’t decided whether he will play in the finale.

9-7 — That’s what the Rams’ record would be with a season-ending win over Arizona. This franchise hasn’t had three straight winning seasons since 1999-2001 in St. Louis. “You want to have those temporary milestones,” McVay said. “What we can accomplish this week is to try to establish a winning record based on where we’re at after 15 games. Is it where we wanted to be? I don’t think anybody would have said that before the season. It is where we’re at, and all we can do is handle it the right way.”

The Cardinals and the final chapter in this lost year.