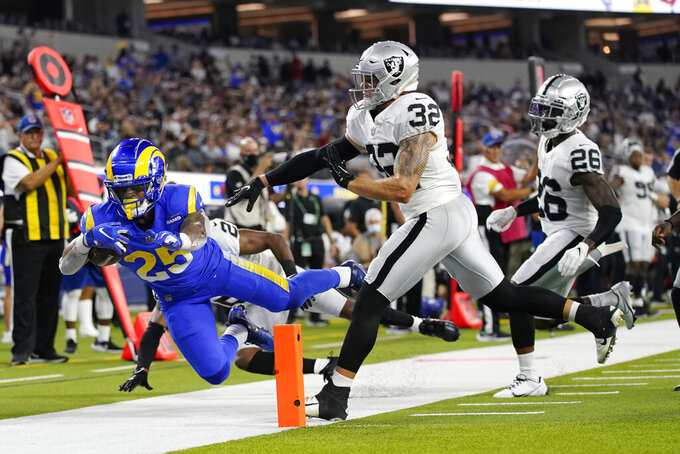 Los Angeles Rams running back Xavier Jones, left, is pushed out of bounds near the end zone by Las Vegas Raiders defensive back Dallin Leavitt (32) during the first half of a preseason NFL football game Saturday, Aug. 21, 2021, in Inglewood, Calif. (AP Photo/Ashley Landis)

THOUSAND OAKS, Calif. (AP) — The Los Angeles Rams are running low on healthy running backs before the regular season has even started.

And though Darrell Henderson's new thumb injury doesn't appear to be serious, the Rams must decide soon whether they're comfortable with the inexperienced depth behind him.

Henderson left practice Monday with a sprained thumb. It's too soon to know whether he'll be ready for the season opener against Chicago on Sept. 12, when he is expected to be the Rams' starter largely because he's the only running back on the roster who has carried the ball in an NFL game.

The Rams won't have two of last season's top three running backs this fall after Cam Akers' season-ending Achilles injury and Malcolm Brown's departure for Miami. They also won't have emerging talent Raymond Calais, who was waived with an injury designation Monday after breaking his foot in their preseason game against Las Vegas.

Calais was in the mix to get playing time as both a backup ball-carrier and a kick returner this season.

“You feel terrible for him,” coach Sean McVay said. “He was really doing a nice job, and it's a bummer that occurred. I was really pleased with the progress he had made, but we feel good about the group we have right now. Going to continue to evaluate it.”

They seem like a team in need of reinforcements, but McVay isn't sure.

“I think we’re still in the process of figuring all that out,” McVay said when asked whether the Rams will sign another running back. “We’ve got a little bit of time. Darrell is a guy that’s been established and done some good things, but I was pleased with both (Jones and Funk).”

Funk rushed for 56 yards on seven carries against the Raiders, stringing together chunky runs of 19, 14 and 12 yards.

Jones, who contributed on special teams as a rookie last season, rushed for 29 yards and caught a 10-yard pass — and he would have had more production without some other big gainers being called back by penalties.

Although Matthew Stafford is the centerpiece of McVay’s bid to return his offense to the top of the league after two mediocre years, a strong running game was a major factor in Los Angeles’ offensive success during McVay’s first two seasons. The Rams were eighth in the league in yards rushing in 2017, and they were third in 2018 on their way to the Super Bowl.

But Los Angeles lost Akers for the season before training camp even began. Henderson sprained his ankle late last season and finished the year with 1 yard fewer than Akers, who didn't play regularly until the second half of the season.

Henderson's durability is another question: He has battled injuries throughout his two NFL seasons, and the Rams held him out of the entire preseason — yet he injured his thumb anyway.

The Rams' preseason finale is Saturday in Denver, and they might wait until after that to decide whether to bolster their depth. Their current options on the free-agent market are intriguing, but they could get better after final roster cutdowns next week.

Todd Gurley is available after one middling season with Atlanta, but a reunion seems unlikely with a player the Rams released only 17 months ago.

The name most often linked with the Rams is Duke Johnson, a dependable veteran who has been effective as a pass-catcher and a runner for Cleveland and Houston. Adrian Peterson and Le'Veon Bell are also on the market, and more backs will join them soon.

For now, McVay is emphasizing the Rams' confidence in the ball-carriers they've still got left.

“Both Jake and Xavier showed some really good things," McVay said. “And then we know the confidence we have in Darrell.”