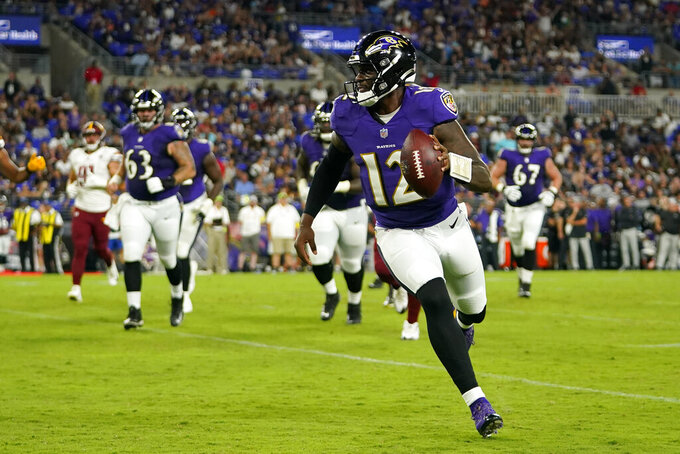 Baltimore Ravens quarterback Anthony Brown rushes for a touchdown in the second half of a preseason NFL football game against the Washington Commanders, Saturday, Aug. 27, 2022, in Baltimore. (AP Photo/Julio Cortez)

BALTIMORE (AP) — Anthony Brown threw for 256 yards and a touchdown, and the Baltimore Ravens extended their record preseason winning streak to 23 games with a 17-15 victory over the Washington Commanders on Saturday night.

The Commanders pulled within two with 5:31 remaining when Sam Howell threw a 13-yard touchdown pass to Reggie Bonnafon. A 2-point conversion pass was incomplete, helping preserve the streak, but Baltimore defensive back Kevon Seymour injured an ankle on the play. Teammate Zakoby McClain appeared to fall on Seymour's right leg.

It was in this preseason matchup against Washington last year that the Ravens lost running back J.K. Dobbins to a season-ending knee injury. This year, Baltimore defensive tackle Aaron Crawford went down with a groin problem that coach John Harbaugh said could be serious.

It was also a rough night for Poe, the team's mascot, who was carted off at halftime.

Neither team was taking too many chances: Quarterbacks Lamar Jackson and Carson Wentz were among those who didn't play.

Backup quarterback Tyler Huntley has been impressive for the Ravens this preseason, but he didn't play much either. Instead it was Brown who was an offensive star for Baltimore. He completed his first eight passes, including a 67-yard scoring strike to Demarcus Robinson early in the second quarter that put the Ravens up 7-3.

“Every play is an opportunity to make a play on film and put some good tape out there," Brown said. “I feel like we did that today.”

A couple of second-year players, linebacker Jamin Davis and defensive back Benjamin St-Juste, were the only likely starters to dress for Washington, along with defensive end James Smith-Williams, who’s part of the group trying to fill in for Chase Young the first few games of the season. Davis, the team’s first-round pick in 2021, is still working to get acclimated to the pro game.

The Washington secondary had its problems, allowing not only the long touchdown catch by Robinson — who was wide open behind the defense — but also a 50-yard catch by Binjimen Victor and a 52-yarder by Robinson.

“I'm just going out, trying to compete, trying to make a roster spot,” said Robinson, who spent the past six seasons with the Kansas City Chiefs. “So I can be here for a long time.”

Howell, a fifth-round draft pick of the Commanders, went 24 of 35 for 280 yards and a touchdown.

The Ravens haven't lost a preseason game since Atlanta beat them 20-19 on Sept. 3, 2015. Their winning streak isn't particularly meaningful, but it does bring some suspense to these otherwise perfunctory contests.

“There's significance to me in everything,” Harbaugh said. “The guys that were out there playing, I promise you it's significant for those guys that played in the game and found a way to win.”

Washington took over at its own 12 with 2:16 remaining and a chance to end Baltimore's run. The Commanders stalled on downs before reaching midfield, and then let the Ravens run the clock out instead of using their last two timeouts.

Washington's Joey Slye was wide left on a 43-yard field goal in the first quarter — a miss that loomed large in a close game. Rivera said Slye gets a little too amped on his first kick of the game.

“He overkicked the ball,” Rivera said. "He gets so freaking excited. ... He needs to calm down.”