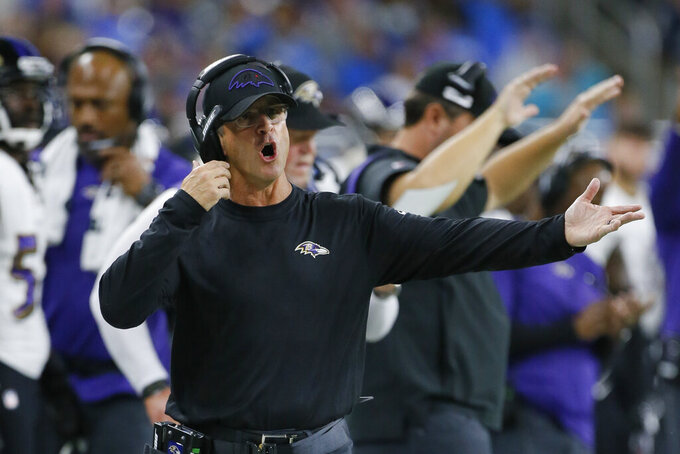 AGAINST THE SPREAD: Indianapolis 2-2; Baltimore 2-2.

TURNOVER DIFFERENTIAL: Colts plus-4; Ravens minus-1.

COLTS PLAYER TO WATCH: WR Michael Pittman Jr. Yes, Indianapolis is a run-first team. But with the Ravens having more trouble defending the pass and the Colts looking for more deep throws, Pittman could become Indy’s focal point this week.

RAVENS PLAYER TO WATCH: LB Justin Houston, who played for Indianapolis the last two seasons before joining Baltimore. He needs 1 1/2 sacks to reach 100 for his career.

KEY MATCHUP: Ravens QB Lamar Jackson vs. the Indianapolis secondary. Although Baltimore's running game still gets much of the attention, Jackson is producing more yards through the air lately, and three different Ravens pass catchers have receptions of over 40 yards this season.

SERIES NOTES: The Colts played in Baltimore from 1953-83 before their middle-of-the-night move to Indianapolis in March 1984. ... Last year, the Ravens punted on their first five possessions, then opened the second half in a no-huddle offense and rallied for 24-10 victory. It was Baltimore's fourth win in the last five meetings.

STATS AND STUFF: Colts running back Jonathan Taylor needs 57 yards rushing to become the sixth player in franchise history to reach 1,500 yards in a player’s first two seasons. He’s run for at least 50 yards in 10 consecutive games, the league’s second-longest active streak. ... Indianapolis receiver Zach Pascal has three touchdown catches this season and tight end Mo Alie-Cox had two TD receptions last week. ... Only five NFL players have forced more fumbles than linebacker Darius Leonard (10) since 2018. ... The Colts have forced five turnovers over the past two weeks. ... Indy’s defense is now in the top 10 in total defense, passing defense and first downs allowed per game. ... Baltimore can set an NFL record with its 44th consecutive 100-yard rushing game. The Pittsburgh Steelers did it for 43 straight games from 1974-77. ... This is the first of four consecutive home games for the Ravens, with an open date also coming in the middle of that stretch. They don’t play on the road again until Nov. 11. ... The Ravens are 16-2 in home prime time games under coach John Harbaugh.

FANTASY TIP: Although the Ravens have looked vulnerable at times against the pass, keep an eye on the Indianapolis injury report before getting too excited about quarterback Carson Wentz. Issues on the offensive line could be a problem.