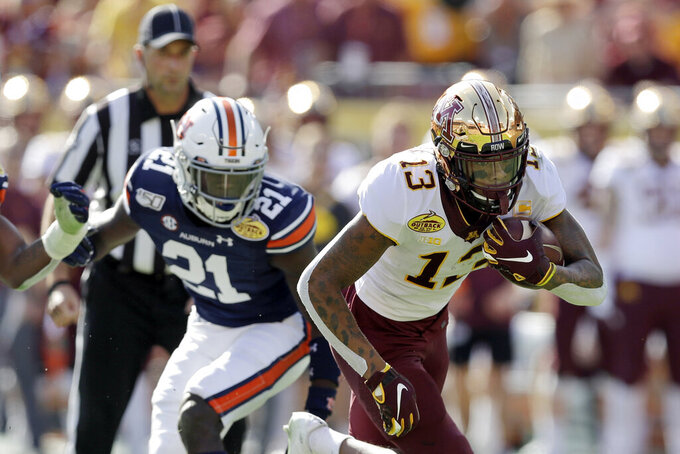 FILE - In this Jan. 1, 2020, file photo, Minnesota wide receiver Rashod Bateman (13) turns upfield against Auburn during the first half of the Outback Bowl NCAA college football gam in Tampa, Fla. Baltimore ranked last in the NFL averaging 171.2 yards passing per game and had the fewest pass attempts with 406 last season. That’s partly because the running game was so proficient behind quarterback Lamar Jackson, the catalyst for the league’s No. 1 rushing attack (191.9 yards per game) for the second straight season. (AP Photo/Chris O'Meara, File)

Baltimore ranked last in the NFL averaging 171.2 yards passing per game and had the fewest pass attempts with 406 last season. That’s partly because the running game was so proficient behind quarterback Lamar Jackson, the catalyst for the league’s No. 1 rushing attack (191.9 yards per game) for the second straight season.

The Ravens are looking to add balance through this year’s draft, but DeCosta contends that’s not a reflection of the players on the current roster.

“I’m aware that there’s some fan discontent with our wide receivers and our drafting and all that,” DeCosta said. “We’ve got some really good young receivers. It’s insulting to these guys when they hear that we don’t have any receivers. It’s quite insulting. I’m insulted by it, too, to be honest. I think we’ve got some guys that want to show everybody what they can do.”

Since taking over as general manager for Ozzie Newsome in 2019, DeCosta has selected four wide receivers in the past two drafts, including first-round pick Marquise Brown, who led the team with 768 yards receiving with eight touchdowns last season.

The Ravens signed free-agent wide receiver Sammy Watkins this offseason. Armed with the 27th and 31st overall pick and later selections, DeCosta will try to nab a receiver or two in the draft.

Baltimore could use the 27th spot to perhaps grab Terrace Marshall of LSU or Rashod Bateman of Minnesota. Both players have the potential to make an immediate impact. They also could last until No. 31.

“In terms of Bateman and Marshall, both talented guys who have some versatility,” Ravens director of player personnel Joe Hortiz said. “They’re both talented guys little different in what they do best. So, they’re probably two guys that we have our eye on.”

The Ravens lost three of their top pass rushers — Matt Judon, Yannick Ngakoue and Jihad Ward — this offseason. The team did not fill the void by signing an unrestricted free agent.

As a result, DeCosta will look to add an effective pass rusher early in the draft.

Some of the edge rushers linked to the Ravens include Jayson Oweh of Penn State, Joseph Ossai of Texas, Joe Tryon of Washington, Azeez Ojulari of Georgia, Zaven Collins of Tulsa, and Carlos Basham Jr. of Wake Forest.

“It’s a strong draft, I think, with edge pass rushers across the board, basically, in any round,” DeCosta said. “So there are certainly some players that we like at the top of the board in the first round (and) second round.”

Despite signing free-agent Kevin Zeitler to start at right guard, the Ravens are looking to add depth on the offensive line.

Right tackle Orlando Brown Jr. was sent to Kansas City after he requested a trade so he can play left tackle to put himself in a position for a more lucrative contract. He was blocked in Baltimore by Ronnie Stanley, a first-round pick (sixth overall) in 2016 who signed an extension last year to play left tackle.

Baltimore had some challenges with some errant snaps at center to Jackson. The Ravens could draft either Alabama’s Landon Dickerson or Oklahoma’s Creed Humphrey to compete for a starting job. Baltimore could potentially move Bradley Bozeman from left guard to center, a position he played for the Crimson Tide.

“The good thing about Bradley is he’s versatile. He can play left guard, or for us, center,” coach John Harbaugh said. “So, I’d say he’s in the conversation for both those two spots.”

The Ravens are determined to secure a new deal for Lamar Jackson, who is eligible for free agency in 2023. However, it will be an expensive endeavor.

Jackson’s new contract could be in excess of $40 million per season. DeCosta acknowledged that extending Jackson would impact the financial flexibility of the team.

“I think the draft will continue and will always remain the lifeblood of this organization when it comes to building this team and building the roster," DeCosta said, "and draft picks will be more important than ever.”