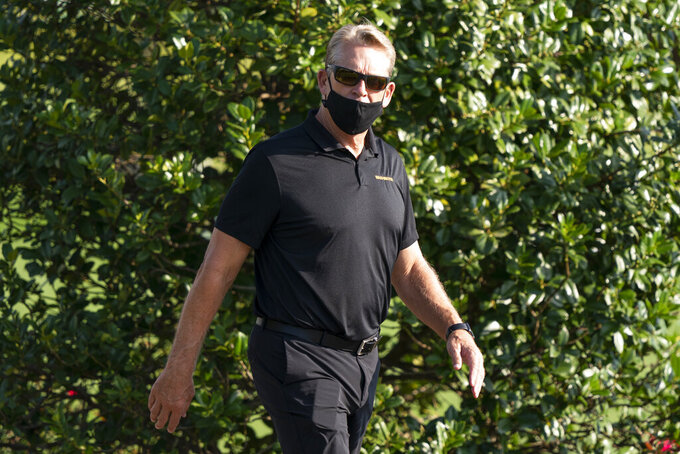 "We carried on as normal," Del Rio said Tuesday. “It was pretty much business as usual.”

Exactly like Rivera wanted. The veteran NFL coach didn't want his diagnosis or treatments for squamous cell carcinoma to interfere with football, and his defensive coordinator followed orders and began the team's preparations for the season opener Sunday against Philadelphia.

"He knew these things were going to occur," Del Rio said. “We’re going to stay on point with what we’re doing. I pay attention to what he’s saying to the staff and what he's saying to the team and I echo those things."

Del Rio didn't have an update on how Rivera was feeling, but expects him back at the team's practice facility Wednesday. So far since taking over in Washington, Rivera has been a part of the franchise dropping its name, the organization responding to allegations of sexual harassment from before he arrived and began his own cancer battle.

Yet that hasn't stopped Rivera from overseeing the culture change owner Dan Snyder has called for and trying to coach a team that went 3-13 last season. Del Rio never had a doubt about Rivera handling all that has been thrown his way.

“He’s been a rock,” Del Rio said. “I think he’s been incredibly stable, been excellent at communicating with the staff and with the players. (As other coaches we) just complement him in every way and support him in every way we can.”

Players are showing their support, too, even if it was different having Del Rio running practice instead of Rivera.

“I really don’t hear Coach (Rivera) when he's here doing,” cornerback Ronald Darby said. “He's not like a loud coach, like a lot of yelling and things like that. But to be honest, it did feel a little weird because what’s going on and what he's going through, but we've got to keep pushing. I know he's going to be good.”

Until Rivera can complete treatments, it'll be Del Rio's team on occasion, and he feels ready for those responsibilities.

Not only does he have 12 years of NFL head-coaching experience from stints with the Jaguars and Raiders, but Del Rio has been in a similar spot to this previously. He filled an interim role with the Denver Broncos in 2013 when coach John Fox was recovering from heart surgery.

“I’ve been in this role before with Coach Fox in Denver,” Del Rio said. “We all tend to our business and take care of our responsibilities, and then if there’s anything that’s needed on the head coach side, then I step in and handle those duties.”