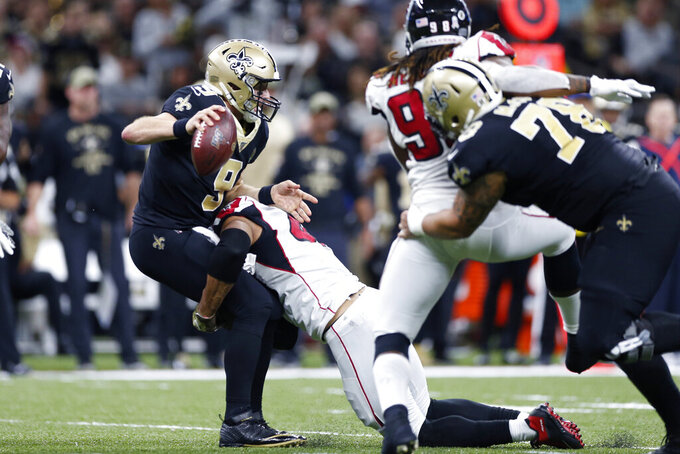 What initially looked like a momentary slipup wound up setting the tone for an uncharacteristically miserable day for New Orleans.

Brees was sacked five more times and the Saints lost 26-9, failing to score a touchdown at home with Brees under center for the first time in his 14 years with New Orleans.

"I pride myself on getting the ball out," Brees said. "It was a lack of execution kind of all the way around, so that pretty much summed up the game right there."

Atlanta nearly doubled its previous season total of seven sacks in one game.

Brees had not been sacked more than three times since 2015, and six equaled his high with the Saints. New Orleans had allowed 12 sacks through eight games, including five-plus games with backup Teddy Birdgwater filling after Brees had thumb surgery in mid-September.

Three sacks came on third down. Two came after the Saints had first-and-goal. The last one was on fourth down.

"We got in a lot of passing situations," offensive tackle Ryan Ramczyk said, noting the Falcons regularly ran stunts that sent edge rushers up the middle. "We were unable to pick up a couple of them and they were getting through."

With both teams coming off bye weeks, the Saints lost the momentum they had created before the break.

Payton singled out third-down conversions. The Saints were 3 of 12 on third down, and the Falcons were 6 of 15, but Atlanta also picked up three first downs on penalties when the defense thought it was getting off the field.

A hands-to-the-face call on end Marcus Davenport and a holding call on cornerback Marshon Lattimore prolonged a 17-play, 75-yard touchdown drive that put the Falcons ahead 10-3 with 11:09 left in the second quarter.

A hands-to-the-face flag on cornerback C.J. Gardner-Johnson, playing after Lattimore left with a thigh injury, prolonged a 13-play, 75-yard touchdown drive as the Falcons went ahead 20-9 at the start of the fourth quarter.

"A talented offense like that is going to make you pay for it," defensive tackle Sheldon Rankins said. "It was only a matter of time before they were able to capitalize on those mistakes."

The Saints picked up one first down on their first three fourth-quarter possessions, sealing their fate and leaving them wondering what happened.

"This isn't a team we overlooked," Ramczyk said. "It's a divisional game and they have a lot of talent."

It was a rough day all around for the Saints. On one of their rare third-down conversions, receiver Tre'Quan Smith ended up with a busted lip after his helmet flew off when Falcons cornerback Damontae Kazee drilled him.

"By the time I got up, my whole mouth was bleeding," Smith said.

The tough catch led to Wil Lutz's 28-yard field goal that cut the deficit to 13-9, but the Falcons pulled away from there.

"We had a lot of self-inflicted wounds," defensive end Cam Jordan said. "You have to be able to beat the man in front of you. It's pretty hard to do that when you keep stepping on your own feet."