Seahawks cooking on offense but getting burned on defense 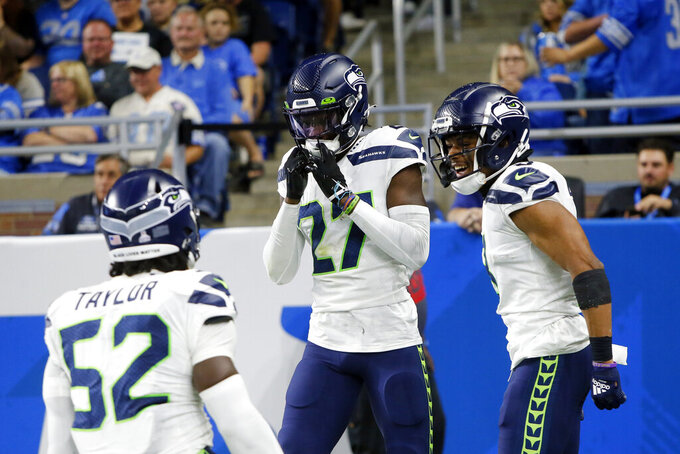 Seattle Seahawks cornerback Tariq Woolen celebrates his interception return for a touchdown during the second half of an NFL football game against the Detroit Lions, Sunday, Oct. 2, 2022, in Detroit. (AP Photo/Duane Burleson)

RENTON, Wash. (AP) — Geno Smith is cooking and the Seattle Seahawks defense is getting cooked.

That’s probably an oversimplification of all that’s happening with the Seahawks right now, but it’s the easiest way to describe Seattle after it improved to 2-2 with Sunday’s wild 48-45 win over Detroit.

Smith is playing at a level no one could have expected when he won the starting job as the successor to Russell Wilson with the Seahawks.

Smith is completing 77.3% of his passes, the highest completion rate in league history for a quarterback through their first four games with a minimum of 125 attempts. The numbers are staggeringly good.

“It’s good for our offense to have that happen because we can now see that we can do that. That’s our standard. We’ve got to make sure we maintain that,” Smith said.

And then there’s the flip side. While Smith led an offense that rolled up 555 yards, the third most in franchise history, Seattle’s defense allowed 520 yards to a Detroit offense that was missing two of its best skill position players.

All four opponents have rushed for more than 100 yards, and the Lions had seven plays of 20 yards or more, something that does not sit well with coach Pete Carroll and the expectations he has for Seattle’s defense.

“The explosive plays are giving them all kinds of opportunities that we can’t give up,” Carroll said. “And those are one thing or another. It’s not any one thing. It’s not the coverage that we’re playing or it’s not the style of stuff or any of that. We just have to execute better and not give up the yardage we’re giving up.”

Part of Smith’s success over the past two weeks is simply Seattle running more offensive plays and being excellent on third downs. Seattle ran 69 plays in Week 3 against Atlanta and 63 plays on Sunday against Detroit. In those two games, the Seahawks are 18 of 29 on third downs, including 9 of 12 against Detroit. Seattle didn’t punt in a game for the first time in franchise history against the Lions.

There’s a lot of places to start for the defensive issues, but having a better pass rush would be a good starting spot. Seattle had just one sack and three QB hits against the Lions. The pass rush was a big factor in Week 1 against Denver, but has seen its influence on slowing the opponent diminished over the past three weeks.

Uchenna Owusu has two sacks, but no other player has more than one.

The Rashaad Penny that dominated at the end of last season finally showed up. Penny carried 17 times for 151 yards and two touchdowns, after rushing for 141 yards total through the first three games combined. Penny averaged a whopping 8.9 yards per carry against the Lions, the third-best average of his career in a game where he had at least 10 carries. Penny averaged 9.2 yards per carry in 2019 against Philadelphia and 9.0 against the Rams in 2018.

While there were plenty of options for lowlights on the defensive side for Seattle, inside linebacker Cody Barton continues to struggle. Barton had seven tackles, but he continues to grade out poorly according to analytics groups such as Pro Football Focus.

Before the season, Barton seemed most likely to be the player subbed off when Seattle wanted to use Jamal Adams closer to the line of scrimmage. But with Adams done for the season, it’s led to Barton playing more and maybe to Seattle’s detriment.

Defensive lineman Darryl Johnson suffered a significant foot/ankle injury that will keep him out for a chunk of time. Carroll said it could be a stress fracture, but didn’t have a specific diagnosis. Carroll said Johnson should be back at some point this season.

14 — The Seahawks are 14-1 in their past 15 road games that have kicked off at 10 a.m. PT. That’s a staggering run of success for something that’s long been considered a major challenge for West Coast teams going east.

Seattle’s lone loss during that stretch came in Week 9 of the 2020 season in Buffalo.

Seattle finishes its two-game road trip on Sunday at New Orleans. It’s another early kickoff and Seattle will be trying to win in New Orleans for the first time since 2004.