Simmons insists Broncos' stellar defense must do even more 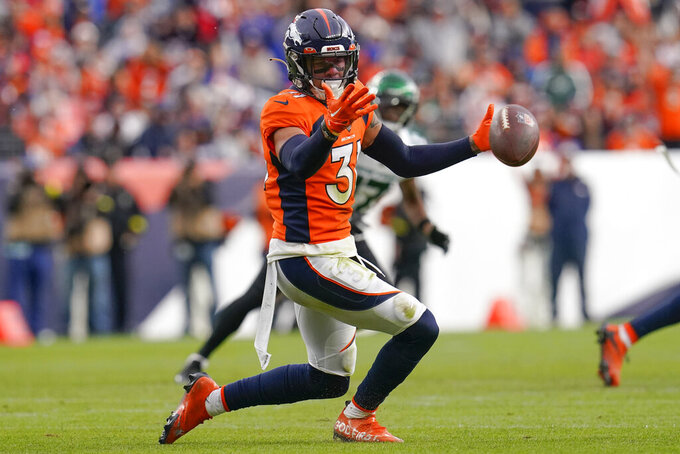 Denver Broncos safety Justin Simmons (31) misses an interception against the New York Jets during the second half of an NFL football game, Sunday, Oct. 23, 2022, in Denver. (AP Photo/Matt York)

ENGLEWOOD, Colo. (AP) — Justin Simmons is one of the NFL's best safeties, yet his entire career has spanned the Denver Broncos' playoff drought that began in 2016.

“This is my seventh season, 9-7 is the best I've been, no playoff berths,” said Simmons, whose teams have won five, six, seven, five and seven games over the last five seasons, the franchise's worst slide since the 1970 merger.

Simmons, like a lot of others, expected that five-year funk of losing records to end when the Broncos acquired quarterback Russell Wilson from the Seattle Seahawks last spring.

But the trade hasn't worked out so far.

With new head coach Nathaniel Hackett going through his own growing pains, the Broncos stumbled to a 3-5 start, averaging a paltry 15.1 points per game.

The only reason the Broncos have been competitive in every game is their devastating defense, led by Simmons and Patrick Surtain II, that's allowing just 16.5 points per game.

“I wouldn’t say I hurt more than anyone else,” Simmons said, “but it hurts not to find ways to win.”

And to keep finding ways to lose.

Just as the team scattered for its bye last week, GM George Paton traded star linebacker and team captain Bradley Chubb to the Dolphins for a first-round pick after paying such a high price for Wilson in the spring. Chubb immediately signed a five-year, $119 million extension in Miami.

So, the Broncos will have to navigate Chubb's departure as they face a brutal second-half schedule beginning with a trip to Tennessee (5-3) on Sunday.

“It hurts seeing a guy like that go,” Simmons said Monday. "But man, it felt so much better waking up the next morning and seeing him sign that big contract because he's so deserving of it. And I'm happy for him and wish him all the success in Miami. ...

"But for us, from a defensive standpoint, nothing changes. We have all the guys in the room to reach the goals that we want.”

While Wilson and Hackett need to make big strides to get the offense out of its doldrums, Simmons said the defense must do even more than it has and needs to produce more takeaways and even touchdown returns.

“All I want is for us to win,” Simmons said. “And I don't care what that looks like. I don't care how it happens. We've just got to find ways to rally together as a team.

“We can't buy into this ‘You’re playing good enough. You're doing this, you're doing that.' Because even the games where you play well enough to win you don't win," Simmons said. "So, you're part of the problem of you not winning those games.”

Denver's defense, despite the loss of Ronald Darby (knee) and Caden Sterns (hip). The return of Baron Browning (hip) would help the Broncos weather Chubb's departure.

The Broncos' offense. It's been a season-long struggle for Hackett and Wilson to mesh their philosophies and strengths. They showed signs of life in London with Jerry Jeudy and KJ Hamler making big plays in big moments, but Courtland Sutton has been a nonfactor for a month.

Dre'Mont Jones is having a monster season and the trade of Bradley clears both the path and the cap room for a big contract extension.

Hackett. A second-half surge is needed to quiet the skeptics who already are calling for a coaching change after the rookie head coach mismanaged several games over the first half of the season. That followed a curious training camp in which the Broncos did very little full-speed work, only to suffer through an injury epidemic anyway.

Browning (wrist) is expected to work his way back this week, but Randy Gregory (knee) needs more time.

14 and 53 — Projected touchdown passes and sacks, respectively, for Wilson this season, both of which would be career worsts for the nine-time Pro Bowler who has won just nine of his last 22 starts dating back to the 2020 playoffs.

A trip to Tennessee on Sunday, when the Broncos' run defense will be tested by Derrick Henry, who had 115 yards and two TD runs in the Titans' 20-17 overtime loss to the Chiefs on Sunday night.